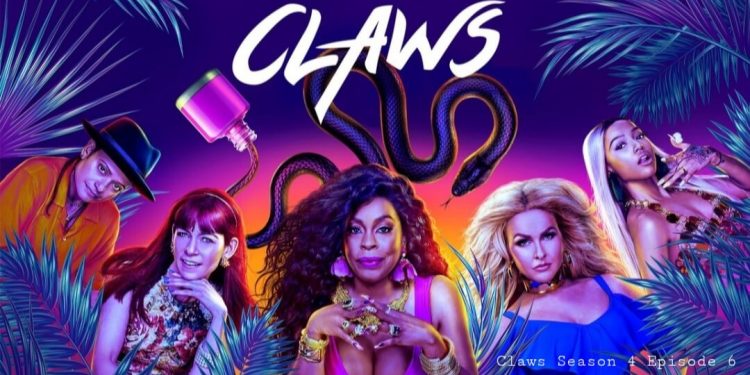 "Claws" season 4 is available to stream on Hulu

“Claws” Season 4 Episode 6 will be focusing on Desna’s second salon and Jenn’s continuous fall into drug addiction again. Meanwhile, it also seems that Jenn might be making more trouble for herself that is not just limited to drugs. The official synopsis hints towards a suspicious development in Jenn’s dynamic with Tony. It could be that her emotional wreckage will force her to make some bad decisions, and her new Oxy addiction seems only one of them. We might also see Bryce, who’s also been a wreck himself, contending with Jenn’s new issues. He has been trying to cope himself, and if Jenn’s suspicious dynamic with Tony comes to light, he’d definitely act out.

Meanwhile, Desna will also be contending with her own new bunch of battles. She has decided to expand her salon business. However, business as usual, there are thorns and obstacles aplenty. What’s more, is that Jenn has fallen back into addiction, so that’s ought to make things troubling for her too. Let’s now delve into all that episode 6 of “Claws” Season 4 will entail. Spoilers for episodes 5 and 6 ahead!

Episode 5 sees Jenn and Bryce going through a storm with their ongoing custody battle for their daughters. They get freaked out and make a row at the court. They also try to plead their case and persuade the judge, with Desna also supporting them. However, nothing amounts to any result, and the children are assigned a group home. That’s when Uncle Daddy learns of it and takes custody of the daughters. Surprising Jenn, Desna, and Bryce, Uncle Daddy arrives with Ann and takes the daughters away. Ann also promises she’ll take care of the daughters, despite all that transpired between her and Desna.

Meanwhile, Cherry comes to Ann to talk about the unsatisfactory pay her dealer crew is getting. Ann isn’t ready to pay heed to her demands. Cherry claims they face significant danger and risks the dealers face from rival gangs due to territorial issues. Ann doesn’t buy that there are any such perils to what she thinks is simple drug dealing. Later, she and Uncle Daddy meet up with Cherry’s crew again and discuss the pay. While they’re busy talking, Jenn’s daughters go missing. Meanwhile, Desna offers Jenn and Bryce to stay in her house for the time being. Uncle Daddy tells Jenn to quit working with Desna to gain visiting privileges.

Uncle Daddy to the Rescue

However, when he loses the kids, Jenn just becomes an emotional wreck. So does Bryce. The police eventually find the kids, and Jenn and Bryce race to meet them. However, they still can’t meet them, and now the kids will be sent to foster care. Desna happens to spot the foster family that takes in the daughters. Jenn, meanwhile, starts taking drugs to cope with the situation. Bryce injures his hand in anger and frustration. They then decide to kidnap their own daughters and do it, setting in motion a police hunt. However, when they go to hand off their daughters to the court and surrender to Desna’s angry advice, Uncle Daddy pulls up again and saves the couple, pretending to have kidnapped the girls himself.

At the end of the episode, Ann tracks down EJ, who agrees to take custody of both girls for the time being. Meanwhile, Desna’s Bambi problem seems to escalate when Sheray barges in panicking. She informs them that the dealers are afraid they’ll also end up dead as Bambi. Following the death, many of the new members are afraid for their lives now. However, Desna tells Sheray and later others to not be afraid. She says that she’ll be there for them all and protect them.

Tony comes, and his desire to be more involved in Desna’s business is still pretty much alive. Seeing how the people are afraid, Desna decides to appoint Tony as security. Meanwhile, Georgia has figured out that the salon is just a front for drugs and also who killed Bambi. Virginia tries to hide it all from her at first but tells her everything when she realizes that she has already found out. Polly comes to learn about the secret is out as well. She tells Virginia to tell Desna herself that Georgia has become privy to their secrets.

Episode 6 of “Claws” is set to release on January 9, 2022. The upcoming episode will focus on the theme of greed, as the title very clearly suggests. According to the official synopsis, Desna will be opening up a second nail salon. However, as is the case with any developments in this world of crime, there will be blowback and hurdles. The new hurdles in this second salon’s pathway to success will be a rival salon. The owner of this rival salon owner will demand a monthly payoff from Desna. So it seems she’ll be occupied with that for the time being.

Meanwhile, Jenn has really fallen back to her drug use again, after the breakdown she had following her daughters being taken away. The synopsis also hints that she’ll be forming a suspiciously close — and perhaps an intimate — relationship with Tony. So what’s that all about? It’ll sure be interesting to see how this dynamic pans out amid all that Desna will be dealing with in episode 6.

“Claws” season 4 episode 6 will premiere on January 9, at 10:00 p.m ET. You can watch “Claws” season 4 online on Hulu. You can currently start binge streaming seasons 1 to 3 on the streaming platform, with the fourth one becoming available as soon as it concludes. If you don’t have access to Hulu, you can also stream the show via other online platforms. Furthermore, VOD platforms like Google Play, VUDU, Amazon Instant Video, and iTunes let you rent or purchase individual episodes or seasons at different prices.

Who Is This New Tiktok Star Preppy Claws?