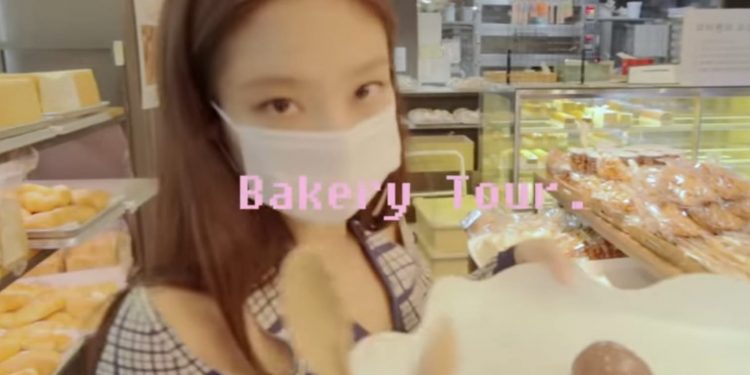 Kim Jennie of Blackpink has been on her journey as a YouTuber since the January of 2021. She started this channel as a gift to the fans, also called Blinks. Jennie quickly proved her Youtube skills through her first video, where we watched her go about her daily activities. Her channel, named JennieRubyJane official, has gained a massive following of 7.16 million subscribers in less than a year. Jennie posts teasers and pictures of her upcoming content on her Instagram account for her 59 million followers.

In Jennie’s latest vlog, we see her in a car on the way to the bakeries. She expresses how happy she is about having to finally go around Yeonhui-Dong for shooting. Jennie expresses that it has been way too long since she was able to walk around freely and is very content in being outside finally. She said she wishes to challenge herself today after a long time of not doing so.

The first bakery Jennie goes to is called For Four Bread which is a vegan bakery in Yeonhui-Dong. She greets the staff and looks around at the variety of bread available. She ends up buying one type of bread and another one for herself. Jennie tells us in the vlog that Bread is something she could eat three times a day for every meal. After leaving with a bag of fresh bread in her hands, she walks to the second bakery she wishes to visit. This one is called Peterpan, and it is famous for its Baby Bottom Bread and Shioh Bread.

Also Read: Blackpink’s Lisa Has Fully Recovered And Has Started To Dominate The Fashion Industry

Jennie calls herself a non-professional bread picker in the vlog as she looks around the Peterpan bakery. She says she’s trying to pick out a new bread for Jisoo and that the Chocolate Shioh Bread is what she’s looking for. Jennie’s favorite bread is the Streusel Bread, and she shows enthusiasm towards Baby Bottom Bread. She finds the name cute and says that the bread is probably named as such because of how soft the bread is. Jennie ends up buying two of the Baby Bottom Breads, a Chocolate Shioh Bread, and another kind of bread and leaves the Peterpan bakery.

Jennie is happily roaming the roads of Yeonhui and tells her fans about how this was one of her wishes. To be able to walk around Yeonhui and look at bakeries was what she wanted exactly. Jennie goes to a third bakery, called the “Le Soleil Bakery”, which is known for its Madeleine. She gets the Nuroong and the “Rose and Rich”. That was the last bakery she visits before she heads back to the company. On the way back in the car, Jennie realizes that she’s bought a lot of bread. She decides that she wants to share the bread with the dancers back at the company. She makes calls to cast a bread mate for herself, to share the mass quantity of bread she’s bought.

Jennie’s first two attempts at casting a bread mate are a failure. “Third time is the charm” turns out to be true for Jennie as the person she calls is available at the company. The third person she calls is Sunho from Omniscient Interfering View. Many of the people are not available at the company because they had gone for the shooting of “Street Woman Fighter”. Upon reaching the company, she gives the fans of the Vlog a tour of the practice room where they practice their dances for concerts.

Jennie then proceeds to write a little post to notes for the bread that she will give out to the people at the company who are not currently present there. Jennie, in total, buys five different types of bread and eats them at the company along with her camera crewmate. She reviews each of the bread types and later passes them around to the people at the company. Since many of them were not available at the company at that time, Jennie left the bread at their tables with post-it notes on them. She also left the chocolate bread she had bought specifically for Lisa in their dance practice room, along with other types of bread. Jennie calls herself the Bread Fairy and ends the vlog with a little summary of what she did during the day.