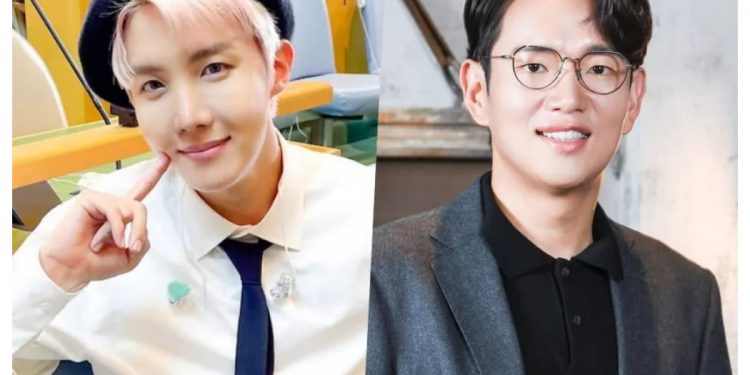 Ever since the members of BTS got their own Instagram accounts, the social media app hasn’t been the same anymore. The guys have been giving constant updates on their lives, making the fans happier than ever. From Jungkook posting his boxing videos to Tae posting random selfies, Instagram has become a really happening place. But one thing that they’ve been doing a lot is showing their support to the people they love. As the dance reality show ‘Street Girls Fighter’ came to an end. Being an avid watcher, Jungkook couldn’t stop himself from fanboying over his favorite dance crew and became the talk of the town. Next in news is J Hope, as went on to make the day of host Jang Sung Kyung through some text messages.

Jang Sung Kyung is a host and television personality and is usually known for playing annoying roles in k-dramas. Working with JTBC, Sung Kyung used to be a news announcer for JTBC until March 2019. But is now working as a freelancer in JTBC Studios. And is working on the YouTube variety show ‘Workman’. The show follows Sung Kyu as he takes on different part-time jobs. The show has been running since 2019 and has done over 130 episodes. Although the variety show will be coming to an end soon, it’s still one of the people’s favorite watches.

What Happened Between BTS’s J Hope And Jang Sung Kyu?

As on January 12, the recent episode of ‘Workman’ came out, Jang Sung Kyung went on to make a post and uploaded screenshots of Nam Joon and J-Hope’s Instagram story. The story was a screenshot of an episode of Jang Sung Kyu’s YouTube series “Workman” where Nam Joon had tagged J Hope on the scene where Jang Sung Kyu had used J-Hope’s name as a pun. Hoping that one day J Hope would join his show too. Addressing his post in the caption, Jang Sung Kyu wrote that he couldn’t believe that the members of BTS would be watching and enjoying his show. Calling himself lucky, he was fascinated by the newly found thing.

Later on, Sung Kyung also went on to reveal the direct messages he exchanged with J-Hope with a heartwarming caption. In the direct messages, J Hope thought how awesome the whole thing was. The idol revealed that he has been watching ‘Workman’ for a long time now. And even calls himself ‘JOB’ i.e. the follower of ‘Workman’. He told him that because of his busy schedule, he wasn’t able to watch the recent episode. But since his member told him about the pun, he went on to watch the episode as soon as he could. Watching his name right there, he was so happy and laughing so hard. Thanking Jang Sung Kyung for making him laugh with great content and wishing him a happy new year. J Hope told him that he will continue to support the host with all his heart.

The Messages Between The Two Were Very Sweet

Jang Sung Kyung was, of course, very touched by the message sent by J Hope. Talking about how it’s not easy for someone who touches the world to take care of one person’s emotion, he said that even aliens would be armies too. Calling himself J Hope’s fan and someone who has watched and enjoyed ‘Chicken Noodle Soup’ countless times, the message made Sung Kyung very emotional. Replying to J Hope, Sung Kyung went on to thank the idol for touching his heart like that. And wished him a happy, healthy, and long career. The hose also respected J Hope’s privacy and asked if he could post the messages they exchanged on his social media account. To which J Hope was more than happy to give him the consent. And also told him that he’ll be always rooting for him.