After long trip to Ireland, is the gang finally coming back home with It's Always Sunny In Philadelphia Season 16? 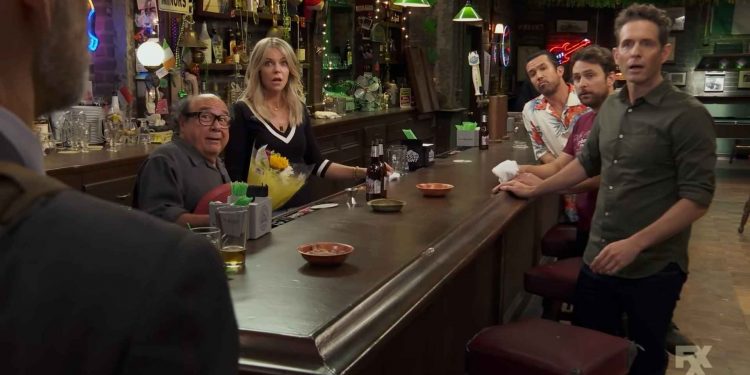 It’s Always Sunny In Philadelphia Season 15 recently came to a wrap this time with only eight episodes in its store. But it was all worth it as we saw Gang flying to Ireland hoping to go for vacation. The only thing is they started the trip on quite a bad note by stealing Dee’s first-class ticket and dividing it. The Ireland trip did find them falling apart, but they knew the American ways in the end. So it was all good, and we wonder if they are coming back home with It’s Always Sunny In Philadelphia Season 16.

For this, we will start by looking at everything that went down during the fifteenth season of It’s Always Sunny In Philadelphia. Right from gang directing a modern-day sequel to Lethal Weapon. To them replacing Dee while she grabs a role in Irish Soap Opera. Then a trip to Ireland sees Mac discovering a harsh truth while Charlie finds his pen-pal. Then we will move to examine the past release dates, the show’s status with FX and its new owners Disney before we move to determine its It’s Always Sunny In Philadelphia Season 16 and its release date, plot and cast.

For most of the season, It’s Always Sunny In Philadelphia Season 15 dedicated itself to Gang going on a trip to Ireland. But to begin with, the first few were quite regular ones. It was just a regular day with Gang looking back at their 2020 in review. Only to find out the chaos they brought upon themselves.

Apart from that, their own movies Lethal Weapons 5 & 6, were being pulled down from the local movie store. This saw the group encouraging themselves to do a seventh installment that could connect both the modern and old audience. Only to realize they can’t make another one leaving a fake Don Cheadle telling the story instead.

The show also took us to the past to tell us about the time gang bought the Paddy’s Pub for themselves. We also saw Dennis learning about Frank’s business for the first time and Dee’s plans to start her Hollywood career. The next time we saw them, Dee was busy trying to grab a role on audition. Dee’s absence encouraged the gang to hire someone to replace her if she is not focusing. Frank expressed that even a monkey can replace Dee, and he literally bought one monkey that makes great drinks.

With Monkey being there for them, the gang also planned of vacation and spent the night drinking and deciding the place. Things took a bad turn for the gang when that monkey got them drunk and robbed them. But they did figure out a place to location, that was Ireland. Coming to Dee, well, she was kicked out of auditions, but after watching her act, the guys offered her a role for an Irish Opera. This means she was going to Ireland too but with a first-class ticket.

The Gang In Ireland

The group divided her first-class ticket for them without letting her know. This did make her angry, but she was late for auditions too. After a lot of begging, she got one role. Meanwhile, Frank spent time cleaning one of his businesses here. Charlie and Mac were learning about their Irish heritage. For Mac, he found out from his mother that he was Dutch, which broke his heart and turned him to Church. Charlie on his side met his pen-pal, who turned out to be his father.

Dennis and Dee, meanwhile found a place for themselves when they realized they had only one room to live. Towards the end, relations between the group began to break. Dee found out that Dennis and Frank messed up her date. Dennis found out that he might have Covid. Frank was angry with Charlie for spending too much time with his new father and forgetting about him. Lastly, Mac found out that the gang paid his mother to tell him he was Dutch.

Towards the end, when Charlie’s father died. The guys might have bailed on him first due to their issues, but in the end, they realized their American ways. They didn’t want to leave anyone behind and went ahead to help Charlie, who wanted to bid adieu to his father according to an Irish Ritual. The gang helped him complete it to close the season.

Also Read: Is ‘Queen of The South Season 6’ Canceled or Making a Comeback?

It’s Always Sunny In Philadelphia Season 16 is happening. This comes from the fact that Disney, in December of 2020, came to announce that the show will continue for four more seasons. That included the fifteenth and the upcoming three seasons. Now coming to the release date for It’s Always Sunny In Philadelphia Season 16, we are expecting it to be around late 2022 or early 2023.

This comes from the fact that most of the time, It’s Always Sunny In Philadelphia has returned with a new season between August-December. Only for seasons 10, 11, and 12 probably the show shifted to March releases. Apart from them, more recent seasons saw a September release, whereas Season 15 of It’s Always Sunny In Philadelphia saw a December release. Taking into consideration that the actors are busy with several projects as well, the best bet remains to be late 2022.

Apart from that, the renewal was kind of expected. It’s Always Sunny In Philadelphia may not hit the right numbers when it comes to viewership. Especially in terms of other shows on FXX, but it may definitely garner views when it comes to streaming. After all, sitcoms work great as binge-watch material. If we look that way, the show is one of the longest sitcoms in terms of years. Still, people are not enough of it, and there is no wondering why Disney opted for four further seasons all at once.

can I offer you four more seasons in this trying time? it’s always sunny in philadelphia has been renewed through season 18, making it the longest-running live action sitcom in TV history. pic.twitter.com/EtIbGBljrO

Well, the fifteenth season of It’s Always Sunny In Philadelphia may have begun on a regular note. But, it was more or less a season dedicated to Gang spending their time in Ireland. It started with their fondness for the country, Dennis wanting a vacation, Frank finishing his old business, Mac and Charlie embracing their Irish heritage, while Dee getting an acting gig. Towards the end, they came to realize their love for their country too.

So, It’s Always Sunny In Philadelphia Season 16 could pick up right where it left off. That is the gang in Ireland and continue their adventures there. We may see them struggling to get back home. The gang somehow managed to afford a trip to Ireland using Dee’s first-class ticket. We wonder how they will make it back home now.

If not that, we may already have them back in the United States to start a new story and a new day. Coming back to America, the trip might have changed them a lot. Especially Charlie, who met his father after so long only to lose him days later. Coming to Mac, he was going to change his entire life after finding out he was Dutch, which was only a prank. Now he may have something else to look forward to. Lastly, Dennis and Frank may get back on Paddy’s Pub while Dee might have more acting opportunities after her work in the Irish Soap Opera.

Apart from them, we already had a taste of some recognizable names from the supporting cast of It’s Always Sunny In Philadelphia Season 15, and the same may go for Season 16. For example, the Waitress was one of the major hurdles in Dee’s journey in Ireland. She stole her role, and Dee kinda paid back by leaving her in a pool of mud later in an episode. So we are expecting Mary Elizabeth Ellis to return and fill in the role of a waitress.

We also saw Artemis Pebdani joining the cast again last season. That was during the time they tried to direct a new sequel to Lethal Weapon. We are counting on her for an appearance. We wonder if she would make an appearance again to help the gang in some new adventure.

Also Read: Another Life Season 3: What is the Series About? Plot & Characters