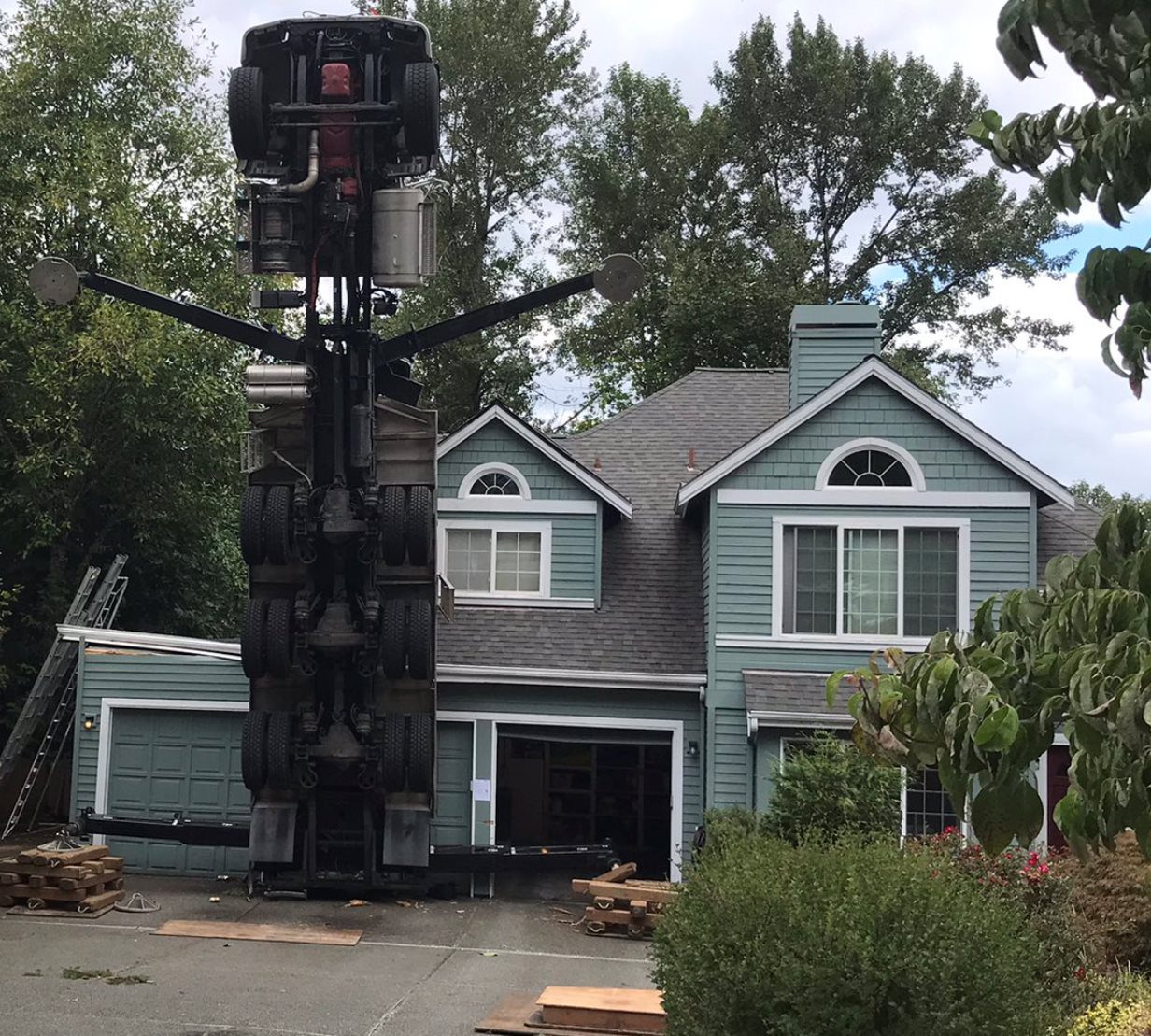 As much as the big machines are developing to make things easy for people, the future is not so bright. Times come when you lose control of the machine. And that can end up creating bigger problems. Things that were supposed to help us and make things easy end up becoming a nightmare and injuring people. A recent example being the crane accident that took place in Issaquah. The city in Washington is surrounded by the “Issaquah Alps” to the south and is known for its trekking places. Although the accident wasn’t a big one, it did become a global focus. Looking at the matter, workshops and factories have been informed to check their machine and controls up.

The heartbreaking news comes from Tuesday morning around 11:45 am. According to the authorities, a huge crane lost its control.  The crane was being used to clean up the big trees around the house. Getting out of hand, it fell back into the garage, standing up straight, with the driver’s cabin in the air. Till now, there’s no solid reason found for the crane to lose its balance and fall back, but the investigation is still going on. Hopefully getting to the root cause of it.

Why was the crane near a residential building?

The officials said that a whole crew was hired to clean up big trees from the property. The owners of the house where the Issaquah crane accident took place have called the crane to work in the front yard. One of the owners, Trish Olivia, revealed that she was the one who called the crew along with a crane as she saw an 8-foot long crack developing in front of the house. The crew was suspecting that there might be water inside that crack, as it was heavier than what was reported. While the crane was doing its work, Olivia was on the other side of the crane. As she saw the wood going the wrong way, in a split second the crane fell back.

An accident is not a thing that took forward too, but people have been lucky that this happened in a quiet place instead of a public place with a crowd around. There was a single person present in the driver’s cabin of the crane and two people present in the house during the time of the accident. Fortunately, three of them are safe and sound.

Two workers from the pickup crew did get injured but and are currently recovering. The worker driving the crane managed to climb down from the vehicle as he rode it down a bit. He got away with a bit of cut and scrapes. Unfortunately, another worker who was handling and cutting the tree fell from around the height of 15-20 ft. He is in a hospital right now recovering. Another worker who came to check on Olivia and her family laid down to catch his breath but passed out. The people at the home were in the hall of the house. Hence being safe from the crane crash. The house is also safe with not much damage other than the garage. Along with a crack in the wall of the home’s master bathroom. Other than that, nobody can something happened according to Olivia.

Involvement of the authorities in the Issaquah Crane Accident

To look into the matter, there has been some involvement of the Washington State Department of Labor & Industries in the case. Chief Mark Vetter, who holds the position of Rescue Battalion at the Eastside Fire station, called it a freak accident. Blaming the carelessness in handling the vehicle, he said that these types of accidents are common but not that common. Explaining the scenario a bit more, he said that to use a crane to pick anything up, one must mind the weight of the object being picked. The crane was there to pick up the big heavy trees. The crew working on the removal might not have been paying attention to the process. Or they might not have gotten the right weight of the tree, causing the load to crane to increase and fall back.

Also Read: Who Killed Scotty in The Affair, Was it an Accident or Planned?