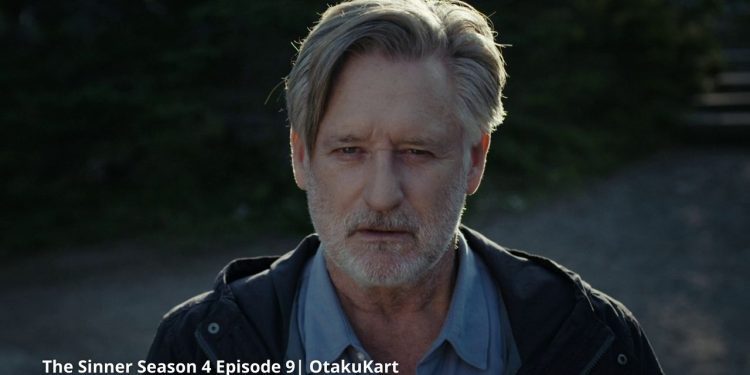 The twisted disappearing case soon turned into a murder case. Then in a matter of days revealed a human trafficking racket. After so many cues, the case finally came to a close. Harry Ambrose came to Hanover Island to enjoy and mark the beginning of his Detective-free life but it seemed like fate wanted him to solve one last case before living his life to the fullest. This saw him crossing paths with a spirited girl named Percy Muldoons whose disappearance and death revealed a lot of shady business of her family. Harry picked up a case one last time and he got what he wanted. So is this a farewell or do we get some aftermath for Harry with The Sinner Season 4 Episode 9?

Well, the case of Percy Muldoon was quite complicated, to begin with. Muldoon’s were quite strange and Harry could never get to understand some of them. Meg tried to be friendly with Harry but he always knew she was hiding. Towards the finale of the show, Harry connected a lot of dots but no one was ready to confess and cops got the wrong guy. But, not everyone wanted to live with a lie, and someone did confess to the wrongdoings. Who was it? Let’s find out.

The Sinner Season 4 Episode 8 opened up with the whole world against Harry Ambrose at this point. Until Raskin came arresting him for confronting Don. Raskin took him to confess that he was wrong. Harry was right, Novak did kill Brandon and Officer Josh was on duty and is on the run with CCTV footage missing. While Mike Lam is let go, the FBI is looking into the human trafficking on the island. Harry still decides to move in with his lead by tracking the local call on Novak’s phone. It leads him to Colin’s residence where Muldoons and Lams are secretly meeting up.

Digging deep into Muldoon and Lam’s business, Harry finds about a small piece of island Lams bought. An island where he finds a grave. At this point, he is assuming it’s Bo, CJ’s brother. Upon confronting CJ, he backs off and asks Harry to leave. Harry gave one last chance to this case by talking to Sean. He was the only one who actually wanted to tell the truth and confessed to him that they killing Bo. Despite Colin trying to stop him.

A flashback tells us how Bo was making extra money with the help of Muldoons’ boat. They tried to talk to him leading to a brawl with Percy picking up a gun. She only mean to scare him but accidentally the weapon shot. The Muldoons tried talking to distraught Lams stating it was an accident in order to save a young Percy and the rest of her life. The families came to an agreement with Muldoons offering Lams one of their fishing permits. To cover up the loss of the same permits, the family began human trafficking.

Harry despite Meg pleading went to the cops and also assured Lams that they won’t be charged for covering up Bo’s murder. After saying goodbye to Lou, Harry stops by the church and comes across Meg Muldoon to whom he gives a knotted fishing rope of Percy. The episode came to a close with the flashback into what went down the night Officer Josh brought Percy home. Lastly, a final conversation of Harry with his imaginary Percy before he starts living a new retired life.

The Sinner Season 4 Episode 9 is not happening. The recent episode 8 of the fourth season marked the end of the season as well as the show. At this point, there are no plans of The Sinner moving in with a new season and a storyline. Harry planned to live a retired life and that was the same reason he decided to visit Hanover Island. Also, at the same time, to forget the Burns case, he was solving the case before this. The Hanover trip got him back into the shoes of Detective one last time.

So coming into the circle, The Sinner is an anthology series. So every season saw Harry Ambrose working on a new case altogether until the Burns case came in and Percy’s after his retirement.  The character was looking forward to a carefree life as the show wrapped. But, if The Sinner ever returns with a Season 5, we could see a new detective taking over since Harry as the character got the ending his character deserved.

The Sinner Season 4 Episode 9 may not be happening, and all the eight episodes have finished airing on USA Network. In most of the international markets, the first three seasons of The Sinner are available to stream on Netflix. So you can expect the fourth season of The Sinner to arrive on the same in a matter of few months. Apart from that, video-on-demand services of Amazon Prime Video, Vudu, iTunes, Google Play Movies & TV, Microsoft, and YouTube TV also offer The Sinner Season 4 to buy and rent.

Also Read: Where Is The Sinner Season 4 Filmed? All About The Latest Season!

Who is Virgil Abloh? Everything About The Fashion Designer