The Revenant is the 2015 Alejandro González Iñárritu directed American epic revisionist Western film. The screenplay is penned by Mark L. Smith and Iñárritu. It is loosely based on Michael Punke’s novel of the same name. The novel followed the frontiersman Hugh Glass’s crazy wilderness experiences in 1823. The novel itself is based on a 1915 poem titled The Song of Hugh Glass. Leonardo DiCaprio, Tom Hardy, Domhall Gleeson, and Will Poulter star in the lead roles. The Revenant first premiered at the TCL Chinese Theatre on December 16, 2015. It eventually saw a worldwide release on January 8, 2016. The movie made ripples upon its release for its cinematography, acting, and direction. It was shot amidst very challenging and harsh weather and terrain.

The Revenant blasted off to the top of box office charts, collecting a total of $535 million across the globe. It wasn’t a commercial success, though. The Revenant is a critically acclaimed film that was nominated for a whopping 12 nominations at the 88th Academy Awards. The critics swooned over the tremendous acting performances by DiCaprio and Hardy. Iñárritu received major praise for his immaculate directing skills. He went on to be nominated and then won the Academy Award for best director at the Oscars. Emmanuel Lubezki also won the Best Cinematography award. Leonardo got his long-awaited Best Actor Oscar at last. But the award galore doesn’t stop there. The film also won three Golden Globe Awards and five BAFTA Awards. Dicaprio also went on to bag a Golden Globe Award, a Screen Actors Guild Award, BAFTA Award, and the Critics’ Choice Award in the Best Actor category. 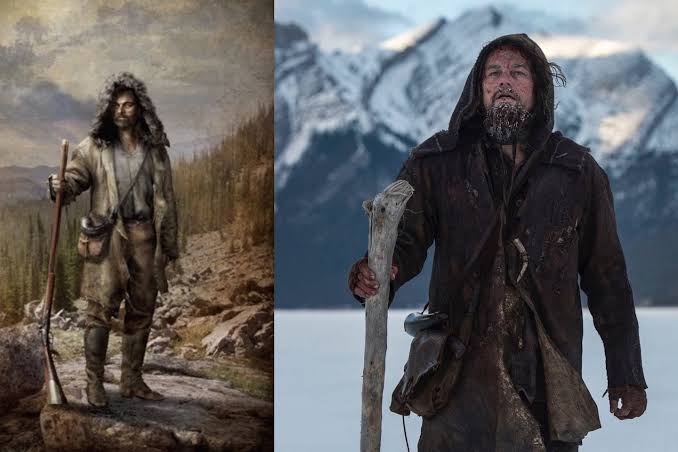 The Revenant — Plot Synopsis and Explanation

The film is set in 1823 and describes the visceral experiences of Hugh Glass betwixt unforgiving climate and terrain. We follow Hugh Glass, who is guiding Captain Andrew Henry’s trappers through the territory of what is today known as Dakota. He and his half-pawnee son, Hawk, are hunting. Elsewhere, the company’s camp bears the sudden all-out assault by the natives. It is the Arikara war party that is attacking the company’s camp. The reason for their attack is to retrieve back their chief’s kidnapped daughter, Powaqa. The fight leaves many trappers killed. The survivors flee on a boat, guided by Glass. He leads them to Fort Kiowa on foot. His reasoning to do so is to not render themselves vulnerable to attacks by traveling downriver.

The survivors have a scouting game; that’s when Glass is attacked by a grizzly bear. He is left half-dead. Fearing another Arikara attack, John Fitzgerald argues that they must mercy-kill Glass and move on. Trapper Henry agrees with Fitzgerald, but when it comes to pulling the trigger, he can’t do it. Instead, he proffers money to anyone who can stay with Glass and, post his death, bury him. The only ones to volunteer are Hawk and Jim Bridger. And now that money is involved, and he has incurred losses from the abandoned pelts, Fitzgerald agrees to volunteer. When everyone else has left, Fitzgerald tries and covertly smother Glass to death. However, Hawk catches him in the act. Hawk confronts him, and Fitzgerald gets scared. To not alert Bridger of what has transpired, Fitzgerald stabs Hawk to death. A nearly dead Glass can only be a helpless witness.

Glass’s journey back from the death

The following morning, Fitzgerald convinces Bridger that the Arikara is approaching and that they should get moving. Bridger is unaware of Hawk’s murder and is reluctant to the idea of moving forward. But, he ultimately agrees. Before they leave, Fitzgerald digs a makeshift grave and leaves the half-dead Glass half-buried. Before leaving, he also leaves his canteen with Glass. After they’ve moved on, Fitzgerald admits that he lied about the Arikara approaching. The two arrive at the fort and meet Henry. Fitzgerald tells Henry that Glass has died and Hawk has disappeared. Although still unaware of Hawk’s fate, Bridger is a part of Glass’s death cover-up. 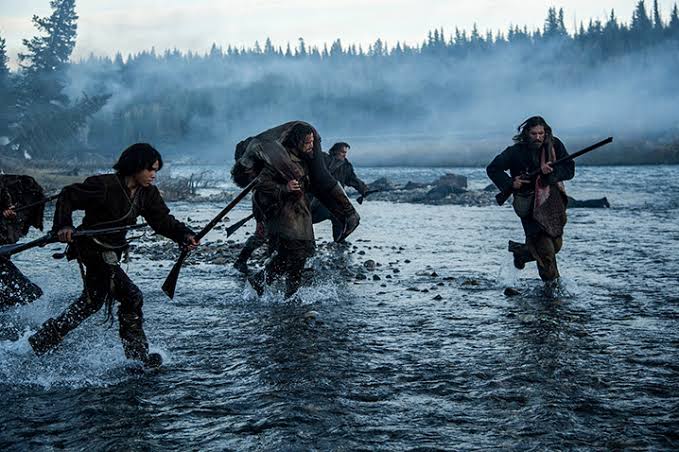 The Revenant is unparalleled in showcasing the visceral brutality of nature, and the fight sequences are harrowing and terrifying.

Glass survives, albeit still in a fatally decrepit condition. He starts traversing through the harsh wilderness. He also performs a shoddy surgery on himself. Arikara approaches, but he escapes them by diving into the white water rapids. Sometime later, he comes across a Pawnee refugee, Hikuc. He helps Glass and the two share food and travel together. Hikuc then constructs a makeshift lodge for Glass when a storm approaches. Glass spends time inside the lodge and trips on hallucinogens. Glass eventually comes out and discovers that Hikuc has been hanged by a group of French hunters. Having had his wounds healed significantly, Glass invades the hunters and finds that their leader is raping Powaqa. Glass kills many hunters and frees Powaqa. He also retrieves Hikuc’s horse. The following morning, he is ambushed by the Arikara and driven off a cliff.

He then cuts the horse open and lies inside its carcass for warmth. Meanwhile, one of the French Hunter survivors rushes into Fort Kiowa, scared straight. Bridger notices Hunter’s canteen and recognizes it as Glass’s canteen. Henry believes that it was stolen and organizes a search party. Fitzgerald also realizes that Glass is still alive. He then flees from the fort. The search part eventually finds Glass. Learning what transpired, Henry is livid and gives orders for Bridger’s arrest. However, Glass vouches for him, saying that he didn’t know about Hawk’s murder. Glass and Henry then set out to catch Fitzgerald.

Henry and Glass split up to search for Fitzgerald. But Fitzgerald finds Henry and kills him. Glass then uses Henry’s corpse as a decoy and manages to shoot Fitzgerald on his arm. He pursues him to a riverbank where the two fight savagely. Glass gains the upper hand and is about to deal with the killing blow. However, he notices a group of Arikara downstream. He then pushes Fitzgerald downstream, and he is flown towards the Arikara. They catch him, and then Elk Dog kills him. The Arikara have finally found Powaqa and let Glass walk free. At the door of death again, Glass goes into the mountains and hallucinates his dead wife.

The Revenant — What Makes The Film A Masterpiece

The critically acclaimed film deserves every bit of praise thrown it’s way. It brilliantly depicts a dark, brooding, and brutally savage atmosphere. Although the real-life events involving Hugh Glass were very different from the movie, it’s just as terrifying. A film’s purpose is also to immerse its audience. It may achieve that through its resonant storytelling, its relatable characters, or the moving pictures. The Revenant excels in all these three. The cinematography by Emmanuel Lubezki is just unparalleled. He and Iñárritu have work with purely natural lighting conditions. Shooting in daylight, the film conveys the terrifying and visceral brutality of nature. It does so while also retaining the creative flair. Lubezki’s cinematography contributes generously to the film’s success. The fight sequences and the bear-fight scene are some of the most thrilling and brutal scenes in history. 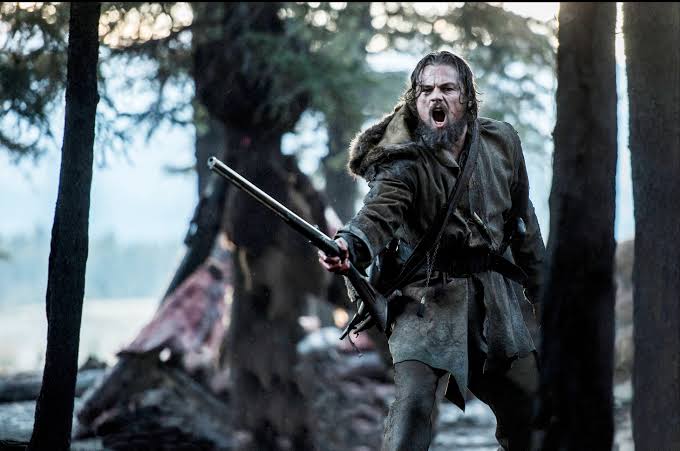 Leonardo delivers one of his career-best performances as the crazy willpower and vengeance-seeking Hugh Glass.

Another thing that does it for the film’s tremendous and well-deserved success is the stellar performances. Leonardo DiCaprio gives in his all during this performance. His physical acting is even more wild and extravagant than in Wolf of Wall Street. He succeeds in physically articulating the willpower desire to not concede in the face of savage death. From getting yanked senseless by the bear to crawling and dragging his incomplete body across the ice, he is always believable. His performance is a great one to bag that long-awaited Oscar wins for him. Apart from DiCaprio, the supporting cast is also great, with Hardy showcasing his acting panache as well. This gritty story of vengeance, traversing the madness of brutal nature, and refusing to die is a film to be experienced. As a composite of all these wondrous aspects, the film will have you gawking at it mesmerized.

A complete film, The Revenant is an experience like no other. It’s a no-brainer — 5/5.

You can currently stream The Revenant on Netflix.