What happened to Shigaraki Tomura? Has he been weakened? 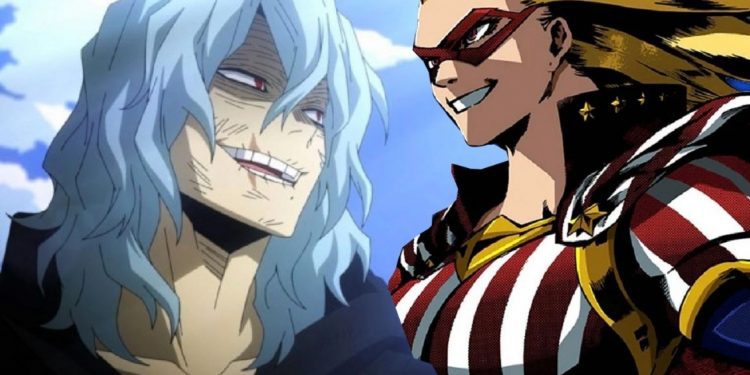 In a chaotic and bloodthirsty World, war and the threat of violence are the essential building blocks for peace and stability. As peace is the absence of war, the positive concept of peace is the presence of war! You might be wondering, ‘why politics when this is just an anime-related article,’ right? Well, if you are curious, we are talking about Shigaraki Tomura. In his recent battle, is Shigaraki Tomura nerfed by America’s No. 1 Hero?

Starting with the introduction of BNHA, it is a manga-based anime written and illustrated by Kohei Horikoshi. Ever since the last episode of the last season, fans are now getting excited to have another season. Anime fans have at least gotten hints about an incoming danger, have you not? As Manga readers are aware, there have been chaos and chaos and chaos all over Japan. Shigaraki, being at his prime, has caused havoc all over the country. Are you now curious as to know what exactly this article is about? Spare a few minutes, and continue reading as we look into, has Shigaraki Tomura been nerfed or not?

In March, heroes vanished from the city. In chapter 258, as well as episode 25 of BNHA Season 5, all of Class 1-A and a bunch of other heroes from hero class, have been called off for the same mission, to gather at the same place. Even though the last episode did not have any kind of big revelation, it sure left anime fans with curiosity and mystery.

Chapter 259, ‘A Quiet Beginning‘ marks the starting of the battles between heroes and villains. Heroes from all over, came together to annihilate the enemy. This beginning brought the end of many, especially heroes. Starting with Maruto Shiga, founder of Jaku Hospital and Current Chairman of the Board, the heroes fast spread to prevent any enemy go on a rampage.

Everything was going accordingly, just when somewhere, something deep down, things started to go awry. Villains had prepared their part of the plan too. While Dabi attacked Hawks, Endeavor had to encounter nomus, and Mirko (No. 5 Hero; Quirk: Rabbit), on the other hand, started fighting high-end Nomus! We all know what a high-end Nomu is capable of!!!!

Shigaraki at that moment was going through an experiment, where he had to endure hellish pain for about four months (Shigaraki’s completion status: 74%). He was about to complete when Mirko had him out. Though incomplete, Shigaraki was at least more than half completed. He soon awakened with immense power – All For One.

Taking over Shigaraki’s body, All for One attacked Tartarus, as he wanted to bring his original body with him! A.F.O didn’t just leave by himself, he unlocked all imprisoned criminals from all jails. His strategy is simple: to buy some time!

Stars and Stripe vs All For One

With Japan’s hero society crumbling to pieces, a hero from America has come. Japan, unable to solve their domestic affairs by themselves, has requested heroes for help. One call from All Might and Stars and Stripe, America’s No.1 Hero, the World’s strongest woman, who even A.F.O. couldn’t help but blurt everything positive about her, came to the rescue. Stars and Stripe is an exception, who hastily entered Japan without any hesitation. All Might once have saved her, which is why she will do anything to help him in return.

Shigaraki has to be completed for A.F.O. to take over, and there were only three days left. And to send reinforcements in one-day was near to impossible. That’s when Star and Stripe: The United States of America’s Number One Hero enters the scene. In chapter 329, ‘The West makes it just on time!! Ready to save the day!! It gives a detailed description of Star and Stripe’s arrival.

As All For One discussed his upcoming plans with Spinner, he also mentioned how badly he wants Star and Stripes, the World’s strongest woman’s quirk, to be his own and shows a great interest in defeating her. While Star and Stripes was just about to enter Japan’s airspace, ‘he’ arrived. That’s right. ‘He’ here is Shigaraki Tomura, or should we say A.F.O.

Just when Shigaraki used ‘Radio Waves,’ Star and Stripes dodged. Chapter 330 is where they have a tough battle. As Shigaraki wanted to have his hand on Stars and Stripes’ quirk, he did everything he could for the same. “Even if I knew what other hidden abilities you have in store for me, I would not need to prepare for them. That’s what it truly means to be the strongest there is, boy,” is what Stars and Stripes said to Shigaraki during their intense battle up in the sky!

Star and Stripes’ ‘New Order’ quirk is just as amazing as O.F.A, but it comes with its disadvantages as well. Just when Shigaraki was about to be fully defeated, his hatred gave rise to a whole new being, which is neither Shigarajki Tomura nor All For One. In the later chapters, the fight intensifies where absolute destruction awaits! “His regeneration will save him again,” saying this Star welcomed Shigaraki, with a smile, to let him have her quirk. That was one bad ending one can have.

Is Shigaraki Tomura nerfed by Stars and Stripe?

The battle to the death continues. However, the sad part is that Shigaraki got his hands on Star and Stripes’ quirk, and only then a major plot twist comes up. Shigaraki breaks apart!! After acquiring New Order, Shigaraki’s quirks are seen rupturing inside of him which is by far, is the worst-case scenario!! Star knew, that if something goes wrong, that is if her New Order is stolen by A.F.O., a backup is needed. So she planned to have her quirk revolt against any other quirks. Her emotions were so strong that she was able to nerf A.F.O. with a huge blow. Thus, Shigaraki Tomura was nerfed by Stars and Stripe.

Her overflowing emotions pierced through evil! “As long as people are still willing to help each other, the will of a hero shall be passed on. And they will surely put an end to you,” Star and Stripes’ sacrifice didn’t go in vain, as she entrusted everything to the future heroes and got them a week, instead of three days, because, now, Shigaraki has weakened after this long and intense battle with the No.1 Hero!

Also Read:  My Hero Academia Should End in One Year, Says Creator