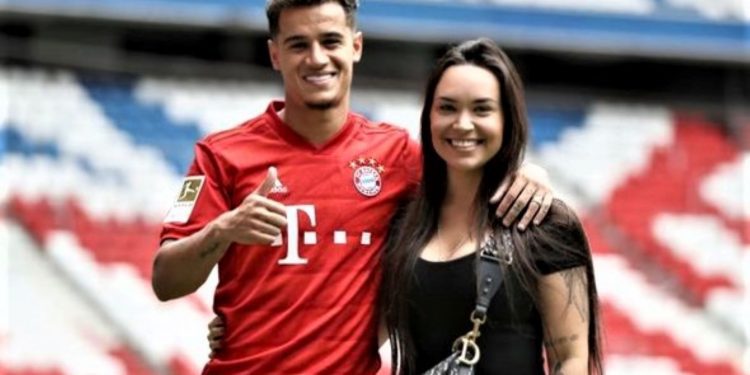 Many would be thinking that is Philippe Coutinho married? Is there any place left for other girls or not? Let’s begin with the straightforward answer – the lucky girl is already chosen. Let’s begin with a brief introduction of Mr.Coutinho. The world-famous personality Philippe Coutinho Correia is a brilliant Brazilian professional footballer who has played various tournaments and leagues. Succeeding to be a good player, he also managed love and family.

Philippe married his love, Aine Coutinho, and has two daughters and a son. He also loves his parents, managing his personal life, love, family, and career altogether. Giving tribute to his parents, two brothers, and his wife, Aine Coutinho, he has tattoos that stretch from his fingers to his biceps showing his immense love for his family. Since the beginning of Philippe Coutinho’s career, Aine stayed with him in all the hardships and happy moments. From living with him under the same roof to accompanying him on his trips, she did everything required. And they grew up together.

He is currently trading with La Liga, playing for Spanish Giant Barcelona, joined in 2018 from Liverpool. Many reputed and famous clubs like Inter Milan have signed him. He excelled at Liverpool and thus became PFA Team of the Year. Together since the very beginning of their adulthood, the two ( Philippe and Aine ) childhood darlings united and formed a great love story in the world of football.

The tremendous achievements and charm of the famous man have attracted the population towards his life. People are curious to know about Philippe. The curiosity for whether he is married or not maximizes because of the separation the happened between him and his wife for a while before marriage.

The Brazilian footballer Philippe Coutinho Correia was born on 12th June 1992 in Rio De Janeiro, Brazil. Philippe is the son of Esmeralda Coutinho and architect Jose Carlos Correia. The footballer has two brothers, Cristiano and Leandro, watching whom he started playing football. He was very shy as a child and usually preferred to be alone, Coutinho is a devout Christian. Coutinho first began playing with friends at local pitches, which helped him with the core of his football. Then he joined a local football academy to improve and then began the real game.

Philippe Coutinho – Married or not?

Yes, Phillipe Coutinho is married to Aine Coutinho. The famous Philippe Coutinho Correia fell in love with the beautiful Aine Coutinho years back. A mutual friend introduced them in 2007 when Philippe Coutinho was 14 years old. And then they continued the contact, that was the beginning of their relationship. Aine Coutinho was born in Rio De Janeiro on 31st March 1993. She is the daughter of Jose Airton and Ines Maria. Her nationality was Portuguese despite being Brazilian. She studied economics at the Sao Paulo University of Brazil. This beautiful lady has three sisters and one brother. She is quite popular on many social media platforms such as Instagram and Twitter having thousands of followers.

Aine started living with Coutinho in his place under the same shade along with his parents in Rio De Janeiro, where they grew up together. Anie stopped her studies to go with Philippe to Italy in 2010. The couple had to live separated for a couple of months, and then the love birds reunited. Philippe Coutinho married Aine on 13th December 2012. The pair have two daughters and a son – Jose Coutinho , Esmerald Coutinho and Maria Coutinho. Coutinho gained a Portuguese passport through his wife Anie in August 2018, making him no longer a non-EU player.

Although they faced many ups and downs, had to bear the pain of long-distance relationships, had to face richness and poorness both, they did marry and are still together, being a great inspiration for all the couples. Maybe Aine is his good luck, as she generally traveled with him watching his games, watching him stepping up the ladder of success day by day. Coutinho has also accepted that Aine plays a huge part in everything he does.

Philippe Coutinho Correia plays as a winger or attacking midfielder for the premier league club Aston Villa, on loan from the La Liga club Barcelona and the famous Brazil national team. His abilities to conjure curving long-range strikes and a combination of vision, passing, and dribbling highlighted him in the world of football. He had joined Liverpool, the Italian club Inter Milan (too early in his career), Espanyol, and so on. He has also earned the name “little magician” by his Liverpool fans and “The Kid” by his team supporters.

Philippe had also faced a downfall at Barcelona after he couldn’t hit off his career there, but he stood up again. Philippe, in January 2018, became the world’s second most expensive football player and the most expensive midfielder at a time when he signed for Barcelona for a club-record fee reportedly the high amount of 160 million Euros.

Also read: What caused the death of VOODOOTHEMENACE from TikTok?