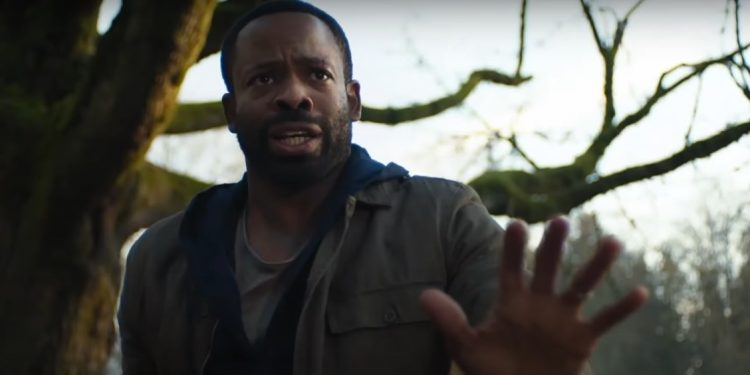 NBC’s disaster drama about a group of people getting caught in a sinkhole in Los Ángeles that transports them into another dimension and then having to rely on survival skills will go for another season. That’s right. La Brea Season 2 is definitely happening, and if everything comes up nice and tidy, the production company might drop more than ten episodes the next season.

Producers Avi nir, Peter Traugott, Alon Shtruzman, Rachel Kaplan, Ken Woodrugg, Bryan Wynbrandt, and Steven Lilien, along with writer David Appelbaum will be quite busy with this renewal. This will probably expand the number of chapters from 10 of the initial debut season to a bigger number. Moreover, with the great success of the series gathering massive reception, La Brea will return to tie the loose ends it left on the series finale. Now without any further ado, let’s begin covering this topic here at Otakukart.

La Brea Season 2 was renewed by NBC on November 12, 2021. Consequently, the cliffhangers left by the season one finale regarding Isaiah, the young little boy from the primeval village —who turns out to be a young Gavin— will have a further explanation. Along with the mysterious interdimensional portal that takes them back to the late 1980s. This and many other loose ends will be answered in the next installment of La Brea.

As for filming, if we take into consideration that the debut season began shooting in Australia back in April 2020 with a 10 episode run, and the photography concluded back in the middle of September. It is very likely that the second season will follow the same pattern. And it’s also probable that NBC will commission even more than ten episodes for the second season. Consequently, we might see production kicking off in Spring 2022.

Where to Watch La Brea Online?

You have a few alternatives if you want to watch La Brea online. To begin, you may watch it on the NBC website, app, and Peacock TV. You can also watch it on Hulu Plus and Fubo TV. Furthermore, the episodes are available for purchase or rental on platforms such as Vudu, Google Play, Amazon Prime Video, and iTunes.

Who will be in the cast of La Brea Season 2?

Natalie Zea (Justified) plays as Eve Harris, a mild-mannered office manager who, together with her adolescent son Josh (Jack Martin), falls into a giant sinkhole that bursts out in downtown Los Angeles. Eve, Josh, and the other evacuees — featuring Sam (played by Jon Seda), his child Riley (played by Veronica St. Clair), Ty (played by Chiké Okonkwo), slacker Scott (played by Rohan Mirchandaney), and drug dealer Lucas (played by Josh McKenzie) – discover they are still in Los Angeles, but 12,000 years ago!

La Brea Season 1 Episode 10 solved the sinkhole issue while also leaving some cliffhangers for the future season. They also contained a surprising death of a significant character. Many characters have matured since La Brea Season 1 Episode 1, yet Silas has remained as obstinate as ever. Regardless of what Eve said, Silas insisted on not letting her take Isaiah. Instead, she attempted to convince herself that Josh was his great-grandson. Silas understandably does not want to lose Isaiah, but what does he know about his abilities, and what exactly is his relationship to Rebecca?

That was never wholly addressed, but Rebecca stated she and Silas were also to blame for the sinkholes. Paara seemed persuaded that Silas was a dubious character, and she regretted ever trusting him. But, as a result, she wished to assist Isaiah in finding his way to his destiny. Paara led the gang to these secret caverns through a shortcut. To get to the top, they had to ascend a rope ladder, and if they dropped, they’d fall in a tar pit. Josh and Isaiah got it up the ladder without incident. However, the ladder collapsed as Eve was ascending.

Eve seemed to be having memories of when she was clutching Izzy’s hand just before she fell into the abyss. Fortunately, she was able to grab Josh’s hand, and he dragged her to safety as she fell in relief on top. Josh and Izzy were worse as the day progressed, and the light became weaker. They appeared to collapse nearly simultaneously in the multiple futures, and it became worse each time Silas got in the way of Isaiah reaching the light.

When Isaiah observed how ill Josh had gotten, he became concerned. But, while his grandpa attempted again to stop him, Isaiah was determined to defend Josh. So he boldly passed into the light with Eve, and both youngsters began to feel better. This incident changed Eve and Josh’s perspectives. Josh eventually acknowledged that he missed his father and informed Isaiah about all the beautiful things he planned to do as Gavin. He sounded pleased with his father.

Bear in mind that Eve is Worried for Levi

This news worried Eve, especially because Levi accused Silas and Paara of killing Eddie, their friend. Silas almost burst into tears as he looked at Eddie’s photograph. Eddie, do you think he’s his son? Everyone seems to be connected. Levi made a tremendous blunder by disrespecting the only people who could help them. They still didn’t know who the true perpetrator was, and in the middle of the chaos, someone kidnapped Isiah. Isiah is probably acquainted with the Hansel and Gretel story. He’d earlier left Eve a trail of the stones he’d been playing with his friends. He’s a clever young guy. Unfortunately, his captor was aware of how powerful he was, and she craved him. How do Silas and Rebecca know each other?

Eve admitted that she had become an overprotective mother when she didn’t have to be. This, perhaps, will deepen their bond and enable them to genuinely listen to Gavin and Izzy when they visit them in 10,000 BC. One of the survivors was killed in fighting while attempting to rescue Isaiah. Silas’ men tried to recapture Isaiah, and he began assaulting Marybeth.

Lucas truly protected his mother, and a gunshot rang out just as the guy was about to knife Lucas. It was almost as if Marybeth had been injured when Diana was shot in La Brea Season 1 Episode 6. When Lucas refused to leave Marybeth’s side, it demonstrated how far their romance had progressed. He was prepared to carry his mother to the sinkhole if they could get out together.

It was a heartfelt farewell between mother and son before Marybeth breathed her last. As Lucas clutched his deceased mother and cried for rescue, tears streamed down my cheeks. The LA crew analyzed Ella’s map and concluded that they needed support if another sinkhole opened up. Despite their displeasure, they sought assistance from Agent Markham. Ella’s memories were aroused as the light started to fade. She remembers Lilly and Veronica attempting to reach the light and Veronica being trapped in a trap. Yet, she looked resolved to return and assist her.

Ella felt concerned as the light dimmed that something had happened to her 12-year-old self. Aldridge urged me to get to the morning, and I’m scared I won’t make it. We witnessed Lilly being held up in parallel scenes because Veronica was wounded and didn’t want to abandon her injured sister. Veronica forced Lilly to complete her mission because Aldridge promised Lilly what she desired most: reuniting with her family in exchange for delivering the letter to Isaiah. However, when Lilly found out Isaiah had already departed, she was crushed. Riley attempted to comfort the little girl, but as she did, the map dragged the two of them and Josh into the light.

Ella and Gavin were discovered together, so they must have been transported to 1988, but what happened to Josh and Riley? Gavin and Ella were resolved to rescue the people they cared about by going through the Seattle sinkhole. First, however, Ella wanted to commit to Veronica, who treated her like a sister. Gavin believed he was invincible and that if he had previously returned through the sinkhole, he could do it again. Fortunately, Izzy insisted on accompanying us on this vacation. She’s as obstinate as her father, and the two make an unstoppable team. The trio was greeted by a woolly mammoth, and we can’t wait to see what the next season has in store for them.

Also Read: Chucky Season 3: Is Charles Lee Ray Coming Back for yet another Killing Rampage?