"Hawkeye" finale seems to suggest towards Kingpin's death at the hands of his niece Maya Lopez. However, the ambiguous scene leaves us wondering if Kingpin is truly dead. 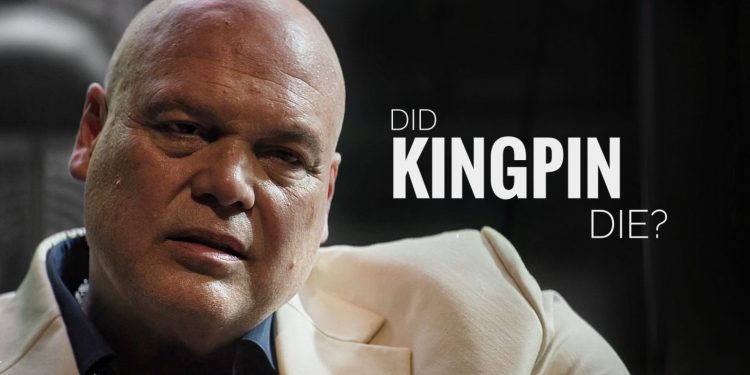 Is Kingpin Dead in "Hawkeye"?

“Hawkeye” season 1 concluded with several Christmas miracles for the MCU fans. We saw Yelena and Hawkeye battle it out. We saw Kate finally coming into her own and transforming into her soon-to-be role of an Avenger. However, the character that arguably excited the fans most was the big bald bulldozing menace — Kingpin. He finally made a full-fledged appearance and not only that, but we also got to see the terrifying villain in action as well.  Along with his battle with Kate Bishop, we saw him make his presence in the MCU as well as his city of New York felt. However, the antagonist seemed to meet his end in the last moments when Maya Lopez seems to have shot him dead. So, is Kingpin dead in the “Hawkeye” finale? Or did he survive his clash with Maya?

Before contending with those questions and what it could mean for the future, let’s delve into a small recapitulation of events surrounding him in the finale of Hawkeye. If you’re still not caught up with the series yet, it’d be better to go and watch it before coming back here. Spoilers for “Hawkeye” ahead!

The “Hawkeye” finale gives us its second confrontation between Maya and her uncle Kingpin. They meet earlier in the episode where Maya lies to him about being done with chasing “ghosts,” referring to the killer of her father, William Lopez. The understood reference here is toward Ronin, but both Maya and Kingpin know she’s referring to him. In their last battle, Barton reveals that he’s also the Ronin and tells her that it was her own uncle, Kingpin, who wanted her father dead. His informant, Kazi, tipped him off to kill Maya’s father.

Although reluctant to the reveal, the seed of doubt had already started germinating inside Maya. By the final episode of Hawkeye, she has turned on her uncle and Kazi. Kingpin is well aware of this fact. Although she still wants Kazi to leave Kingpin and come with her, Kazi tells her it’s impossible for him to walk out now. In the short-lived fight that follows, Kazi dies.

Meanwhile, Kingpin is fighting a battle of his own nearby. He’s a hair strand away from killing Eleanor Bishop when Kate turns up and tries to stop him. However, she quickly learns that the Big Guy is just built differently. As he rubs her arrows off like they’re tiny pricks, Kate pushes hard, but Kingpin overwhelms her. However, with the help of her mother, Hawkeye’s trick arrows, the coin flip shot (that she performs with Kingpin’s famous cufflinks with brilliant perfection), and her annoying perseverance, Kate finally knocks Wilson Fisk down.

Also Read: 10 Marvel Characters That Are Stronger Than Scarlet Witch in the Comics

What Happens to Kingpin in the Hawkeye Finale?

Being the tank of a guy Fisk is, he recovers from even the exploding arrows quickly. Near the ending of “Hawkeye” episode 6, we see Kingpin fleeing from the scene, bruised and slightly limping but still strong enough to qualify as a sentinel. That’s when one of the “Trust A Bro” vans stops him in his way. Bedazzled by the headlights, Fisk is happy to see Maya coming out of it. However, Maya doesn’t seem to reciprocate the same feelings as Kingpin. Maya has returned to exact her retribution for her father’s death. She now recognizes the true culprit who stole her father from her.

Maya confronts a tattered and beat-up Kingpin, who tells her “what a surprise” it is to see her. We see Maya pull out a gun, which Fisk sees as well. He then tells Maya that they’re family, trying to stop her. However, Maya is way past familial bonds right now, having just bid farewell to Kazi. Paying little heed to Fisk’s attempts at persuasion, Maya points the gun at his face. Unfazed still, Kingpin tells her, “Sometimes family doesn’t see eye to eye.” The shot cuts off mid-way through his final line before the camera pans up, and we hear a loud, echoing gunshot with a muzzle flash. However, we don’t get to see Maya killing Kingpin directly.

Is Kingpin Dead in Hawkeye Finale?

That’s the question we’re all left with at the end of the thrilling “Hawkeye” finale. However, is Kingpin really dead? Well, that’s not a difficult question to answer. The decision to bring Kingpin in for a grand finale just to kill him off at the end is not the kind of decision Marvel would make.

So no, Kingpin is not dead yet.

Kingpin’s return to Marvel is a huge and hugely anticipated deal. Fans of Netflix’s Daredevil series have been dying to see arguably the best antagonist from all Marvel IPs to make a comeback.

After confirming his return to the MCU in “Hawkeye” episode 5, Marvel brought Wilson Fisk, aka Kingpin, back to its shared universe. Suffice it to say, Kingpin is back, and he’s most definitely here to stay. What about the shot where he seemingly dies, though. Well, that can be chalked up to Marvel intentionally leaving Kingpin’s fate ambiguous. His story in the MCU has just begun, so killing him off right away would be absurd, to say the least. So the answer to “Is Kingpin dead in Hawkeye” is a tacit “No”.

Also Read: How To Watch Marvel’s Spidey and His Amazing Friends Season 1?

Why Kingpin is not Dead in Hawkeye — Speculations & Theories

Maya does pull out her gun, she points it at the man behind her father’s death too, but did she manage to direct the bullet to Kingpin after she pulled the trigger. Are we even sure that she did actually pull the trigger? Kingpin was standing at an arm’s length from Maya. He could’ve just given her a smack, rendering her disoriented and shooting at the air. Or worse yet, the gunshot could have been courtesy of Kingpin after he snatches the gun away from her. However, shooting people to death is not really the Kingpin style. He likes to badger people to death. Decapitation, smacking, breaking, fracturing, and crushing are more up his alley. His language of killing is very physical.

Moreover, even if Maya seems dead set on killing him, Kingpin would probably still want her by his side. She’s a true asset and very competent. However, persuading her to get to his side and bury her vengeance seems almost impossible. But hey! Anything could happen, and the only bet that seems to yield a return is on Kingpin’s survival. The Big Guy can’t die like that, and we won’t need to wait for long until we find out exactly what happened between him and Maya during that confrontation.

It has not been long since we got confirmation regarding another one of Marvel’s Disney+ series, Echo. Based on Alaqua Cox’s Maya Lopez, the show will follow her standalone story and likely follow up on the events of the Hawkeye finale. Maya is set to return and don the anti-hero cape. Also expected to return with Maya is a whole slew of characters “Hawkeye” introduced us to. The most prominent among all those speculated to star in the show is Wilson Fisk, aka Kingpin himself.

Maya’s enmity with her uncle has just started. The scene where Kingpin seems to die at the hands of Maya is intentionally left open-ended like that. There’s more to Kingpin that Marvel’s “Echo” will surely explore. Maya would now have to be way more careful, now that her life under Kingpin, and hopefully in the underworld, has ended.

We can also expect some other characters from “Daredevil” to return in “Echo” alongside Kingpin, now that he has. We’ll have to wait and watch what transpires now and what Kingpin’s, as well as Maya’s fates, entail.

Also Read: Where is Hawkeye Filmed? Production Locations for the New Marvel Series

Hawkeye Episode 7: Is Season 2 A Possibility?