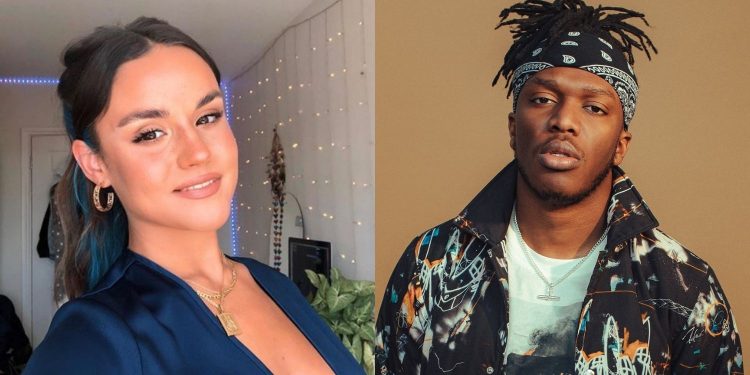 The question we shall be tackling here is regarding the relationship status of Katie Leach. Is she single? Is Katie Leach dating KSI? All of you must be wondering what happened to her past relations? You must all know who is KSI? There was some news circling on the internet talking about his breakup. So, is KSI single? What are the dating histories of the two? Without adding many spices to the topic, read further to find out if Katie Leach is dating KSI.

The famous Instagram star Katie Leach is a trending celeb nowadays. She has won the hearts of many through her beauty and grace. Whereas KSI is a multimillionaire YouTuber, Boxer, and Rapper. He is mainly known for the diversification in his work. There is very little information available about the two, but the facts stated below is what we have found out.

Are Katie Leach And KSI Dating Each Other?

No, Katie Leach is not dating KSI. This is a false rumor that has surfaced on the internet. They are not dating each other. However, they both had previous relationships. It is a coincidence that they both are single and not dating anyone now, according to the reports.

KSI has revealed that he had broken up with his girlfriend in early November 2021, with whom he was in a private relationship. He confronted that it was nobody’s mistake. It just didn’t work out.

Also, Katie has accepted that she is single now. She doesn’t have any boyfriend or relationship at present. Having at least a relationship in the past, she must also be in the public eye.

Katie keeps her life as private as she can, like any other famous personality in the present world. Her love life is also not much revealed to the people. But according to the rumors and news, she had only one relationship in the past. However, it may vary with the reality.

Katie Leach’s ex-boyfriend is Harry Lewis. Harry Lewis, popularly known as W2S, is a famous youtube personality who happens to be the youngest member of the Sidemen. He was born on November 24, 1996, in Alderney, Guernsey. His complete name is Harold Cristopher George ‘Harry’ Lewis. Unfortunately, their relationship didn’t work, and they broke up. And you must all know that W2S/Harry Lewis is a very close friend of KSI.

Katie was born on December 30, 1997, in Guernsey. All about her family life, education and childhood are concealed. She began sharing her pics on social media in 2013. Then continuing with her passion, she has become a member of the famous Instagram star. This rising social media influencer mainly gained fame and name for her ex-relationship with a youtube gamer and commentator, W2S (Harry Lewis).

This 24-year-old celeb has done really well in her life. The precious Instagram star had an estimated net worth of about one million dollars in 2019. The main source of her income is Instagram.

KSI’s original name is Olajide Olayinka Williams “JJ” Olatunji. He was born on June 19, 1993, in England. The famous multitalented personality has tremendous passions. He is a YouTuber, rapper, singer, songwriter, boxer, and actor. KSI is the co-founder of the British youtube group popularly known as the Sidemen and is also the co-owner of Prime Hydration, XIX Vodka, and Sides.

JJ’s multitalented abilities are accompanied by his youtube’s diversified contents to include vlogs as well as comedy-style videos. He has millions of subscribers and billions of views across his two youtube channels. Along with being such a talented person, he is also a big-hearted man, contributing to various charitable activities. But like others, his fame was also not without controversies. He has also been through various ups and downs in his life. While previously his YouTube Channel was focused on Vlogs, Skits, and Gaming, the YouTube Star now uses his main channel as a platform for his music career. Meanwhile, his second channel, JJ Olatunji, is used for his other YouTube videos, especially Reddit Videos.