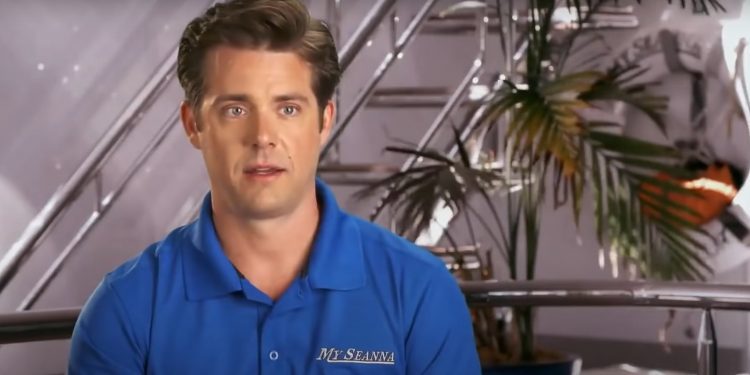 The My Seanna had a lot of steamy things happen last week. And what’s coming to Below Deck Season 9 Episode 7 won’t be any different. With Jake drinking all the way to unconsciousness, only to find out that he kissed another man to like it. And with a fight over a missing pair of tongs in the kitchen, also, an unspeakably small thong catches up all the attention in a shots-fueled 1980’s party.

And the My Seanna’s crew adventures with alcohol weren’t enough, another protagonist last week was a trampoline. In our recap, you’ll learn why. But not everything is easy-peasy-lemon-squeazy with the crew. As there are many a thing catching up with the drama. There’s some bitterness as well, coupled with some workplace stress. But without any further ado, let’s begin covering this reality show here at Otakukart.

Below Deck Season 9 Episode 7 will release on December 6, 2021, on Bravo at 9:00 PM, Eastern Time. To begin, this season will have around thirteen more episodes. Consequently, there is many more sea adventures full of drama, yummy cuisine, lots of rum, and luxury on this ship. Secondly, Bravo drops a new installment of this reality show every Monday.

Where to Watch Below Deck?

If you want to watch this show, simply tune in to Bravo at the airtime. Now, if you miss the airtime, you can navigate to the Bravo website or use its app to watch it. Additionally, the show is available on many video-on-demand platforms like Amazon Prime Video, iTunes, the Microsoft Store, Google Play, YouTube TV, and Vudu. Lastly, these platforms also offer past seasons if you want to check them out.

Whatever Heather thinks of the supper, this is a five-star service. We’re back on deck, and Eddie is still yelling at his crew about the excrement that’s been blowing off the boat. “I’m sick of it all,” he asserts emphatically. Otherwise, the morning’s talk is Rachel’s breakfast, the upcoming ’80s party (which Heather is excited about, even though she wasn’t alive in the ’80s), relationships, and Ronnie turning 75 (Alexander guesses. And the trampoline, which Alexander is eager to use.

Concerns arise with the audience when a vast, unexpected event is hyped to death before an episode. But the Emmy-nominated Below Deck editors know what they’re doing. It’s a fantastic moment of foreshadowing – when we hear Alexander mention the trampoline. And then see the workers erecting it. We know it’s going to fly over the water at some point. It’s Chekhov’s trampoline.

Funny moments with a trampoline

The hilarious moment of this chapter was when the trampoline flew away. It’s precisely the right moment: the deck crew is discussing Jake peeing on his girlfriend. And suddenly, everyone appears to exclaim “whoa!” at the same time, and we know what’s occurred. That trampoline goes! It’s nearly as amusing to see the crew running into Jet Skis and the tender to rescue a trampoline. Later on, the most significant thing is that no one got in trouble. Why? Because the wind was so fierce that the rope holding the contraption in place practically broke.

Another foreshadowing moment occurs while the group prepares for the ’80s party. When Jake’s thong is so tiny and tight that his crotch must be blurred while he wears it. In a confessional, Fraser describes Jake as “just so effortlessly stylish.” Also, the “5” balloon Heather purchased for Ronnie’s 75th birthday flies off the boat before the celebration. At that moment, we can formally determine that tiny objects going off the ship are delightful comedies, and we never get tired of it.

Supper seems to be running late, and the guests appear to be anxious, but this is quickly fixed when they see the heaped plates of lobster and crab that Rachel has prepared for her ’80s steakhouse dinner. On the other hand, Heather is irritated that the staff is sending out platters of food without tongs, despite the visitors’ delight. Mind you, the deck staff, because she has Jess and Fraser on cabin turndowns at various moments throughout dinner service!

Heather’s rage about the tongs causes a dispute between her and Rayna, who should not be expected to understand how service works; even when Fraser returns, he can’t locate other tongs. And, to be clear, the visitors are unconcerned because they are just enjoying their steak! If necessary, serve it with a fork. Heather complains that “nobody took the effort to come up with a solution”.

The rest of the morning goes smoothly without a hitch, from breakfast until docking. Rachel’s main criticism is that health-conscious Todd orders scrambled egg whites, which she refers to as “the misery of my life.” Meanwhile, Ronnie declares that this has been “the best three days of food I think we’ve all ever had.” It’s difficult to deny the $25,000 tip, which is once again handcuffed to Alexander’s wrist. Rachel and Heather cause the rain to fall. And Fraser mopes because Captain Lee praises Jess for breaking out of her shell at the ’80s party.

Let’s catch up on Jess’s complaints about this episode. Fraser is upset because she didn’t see the glass that shattered when the balloon went away and gave him a sour face when he asked to call deck. He’s also upset since she didn’t know which mattresses to strip for turndowns and which ones the visitors didn’t use. And, above all, he’s upset that she got her gold-star moment from Captain Lee while he didn’t. Later in the episode, Heather approaches Eddie about this issue, telling him she’s glad Jess shows more energy but is concerned about Fraser’s reaction. There is still far too much talk about Jess, and far too little happens about Jess.

If there was ever a night when the crew deserved to party, it was tonight. So they pound shots, wine, and espresso martinis (another Below Deck crew favorite) at dinner at another unassuming Caribbean restaurant. Jake, in particular, is looking forward to celebrating by getting handsy with a now-bare-chested Fraser at the bar. Fraser says in a confessional that he has a “little crush” on Jake. “He’s a full-fledged man whore, but that doesn’t bother me,” he says. “He’s gay, and I’m straight.” “I’m not a moron.”

Jake had barely stripped down to his underpants at the bar before long. After some prodding from the crew, he pulls them the rest of the way off and chooses to skinny-dip. “Come on in; I’d want to see what it looks like!” Rayna begs. The unfortunate bartender, however, does not. Jake does end up in the water, along with Fraser, who is still in his underpants. Jake’s nakedness doesn’t stop them from being all over each other in the water. As he exits and washes, Rachel catches a sight of Jake that Rayna had hoped for and exclaims, “Dammit, I can’t unsee that stuff!”

“Not gay, just sexually at ease”

The van journey back is that tragic ride, which has also been heavily advertised in advance of this episode. However, there is some new information here: Rayna’s daring prompted Fraser and Jake to kiss (who decides after witnessing their quite passionate makeout sesh that maybe she should start watching gay porn). “I’m not bisexual,” Jake says afterward. After that, he says: “I’m not gay; I’m simply sexually at ease.” This whole sequence is amusing to me as well — maybe because Jake is clearly at least a bit bisexual. And Fraser instantly disproves everything he stated about not getting involved with people on boats and not believing he had a chance with Jake.

The remainder of the night back on the boat doesn’t quite live up to Fraser and Jake’s antics, but it comes close, due in part to Eddie setting fire to his hair with a blowtorch (I cackled again!) and the crew attempting to figure out where the stench of burned hair was coming from. The following morning, though, is the icing on the cake for this five-star episode. Jake is “f-cking trollied” from the night before, and when Eddie questions him, he swears he doesn’t recall kissing Fraser.

Jake doesn’t seem to mind the news (or be surprised), but Fraser does because he also doesn’t remember kissing Jake. At first, his shock is amusing, but there is a tinge of sadness to it, with Fraser concerned that he has ruined his friendship with Jake, who is ostensibly straight. But, of course, it’s mainly because Fraser is the one who is left feeling terrible here, as if he’s the gay dude who corrupted Jake when it was just a dare, and one Jake was plainly happy with if he kissed Fraser again.

Also Read: The Grand Serpent Arrived on Earth: What will Happen in Doctor Who Season 13 Episode 6?