As the gang's Ireland adventure comes to a close, should we we expect It's Always Sunny In Philadelphia Season 15 Episode 9? 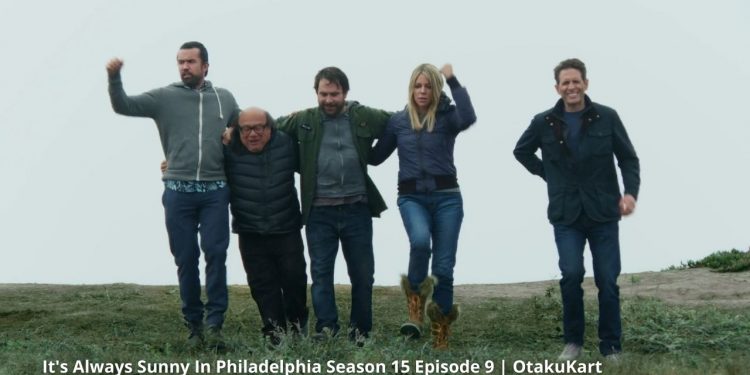 It’s Always Sunny In Philadelphia Season 15 for half of its season saw the Gang spending their vacations in Ireland and we wonder if that’s the same for Episode 9. If not, then are we in for a new season? The urge to go to Ireland began with Dee focusing on her new auditions and Gang hoping to replace her as their partner. While Dee at the end of the day received a call from Ireland itself, the gang also came up with a plan to go on vacation in the same place. That too, by dividing Dee’s first-class ticket into four without telling her.

Ireland opened up a lot for Charlie and Mac though. They wanted to understand their Irish heritage. Mac’s heart broke when her mother told him he is not Irish. But Charlie on the other hand was surprised to meet his father after all these years who was still up and running a shop. Dee on the other side did get a job but it took a lot of begging in order for her to grab it.

Previously on It’s Always Sunny In Philadelphia Season 15, we opened up by assuring us that Dee is alive. Dennis was suffering from fever last night but passed out before hitting her with an ax. Amidst all of this, Dee asked his Doctor for a date which was unusual. As they came back home, they met a frustrated Frank who is not happy with Charlie only hanging out with his father. This results in him and Dennis planning a prank on the father-son duo.

Mac spent time trying to learn god’s ways and how the world work where he met another gay man who is trying to control his urges. Dee trying to click a selfie for her date tonight ended up falling in a swamp. The only person she could find for help was the waitress. She made Dee remember her name the whole day. Still, despite her failure, she decided to help only for Dee to leave her in the swamp. Coming to Frank and Dennis, their plan failed terribly on Charlie and his father Shelly leading them to leave bashing on them.

The eighth episode saw Charlie revealing to the gang that his father died. Now he wanted to live up to Irish culture. This requires them to carry his body to the mountain top. Then drop it in the sea. Frank revealed Dee’s date Doctor came and they poured hot oil on him saw Dee leaving. The gang revealing Mac is Irish by paying his mother to say he is Dutch resulted in Mac leaving. Dennis possibly passed Covid to Charlie’s father and Frank accidentally gave Charlie a bottle of piss saw Charlie asking them to leave.

A fight with the Waitress at a bar saw the gang realizing their American ways on this vacation. This saw them taking a car up the mountain. All in spirit to help Charlie complete the Irish ritual of saying goodbye to his father. They did and they are now coming back to their home.

It’s Always Sunny In Philadelphia Season 15 Episode 9 is not happening. The fifteenth season only consisted of eight episodes that saw the gang travel to Ireland for half of the season. From Dee trying to grab a new role in an Irish soap opera to Charlie meeting his dad. It was a hell of a ride. As of now, there are no official details on whether the show will be coming back with the sixteenth season or not. Anyways, we will keep you updated with that.

Since It’s Always Sunny In Philadelphia Season 15 Episode 9 is not happening. But can stream the rest of the season on video-on-demand services of Amazon Prime Video, Vudu, YouTube TV, iTunes, Microsoft, and Google Play. In the UK, It’s Always Sunny In Philadelphia Season 15 should come in a few months on Netflix UK while in Australia the show is a season behind which you can watch through Foxtel Now.

My Senpai is Annoying Season Finale: Is Season 1 Ending?