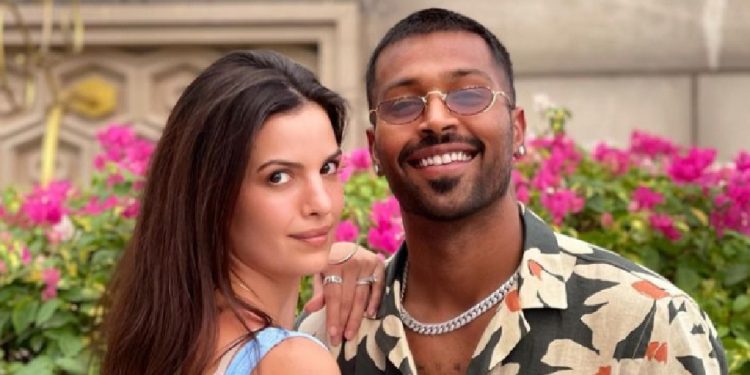 Indian cricketer Hardik Pandya delights die-hard fans around the world not only for his incredible playing but also for his fun social media posts. His wife Natasha Stankovic is also a well-known figure on the Internet with a successful career as a dancer and Bollywood actress. In the couple’s latest Christmas special post, the actress was spotted with a suspected baby bump, and we were all shocked. For those who don’t know, Hardik and Natasha often communicate with fans through Instagram posts that they often upload. Is Hardik Pandya’s Wife Pregnant?

They also continue to share photos and videos of their one-year-old son, Agastya. The couple previously made headlines when Hardik got a new dad tattoo, and Natasha had the funniest reaction to it. Hardik Pandya’s latest Instagram post shows a gala time with his family on the occasion of Christmas 2021. In the photo, you can see his brother (also a cricketer), Krunal Pandya, mother Nalini Pandya, and his wife, Natasha Stankovic. The house is decorated with a large Christmas tree, along with piles of wrapped gifts underneath. The happy photos quickly won the Internet as soon as they were published on the Internet.

Indian cricketer Hardik Pandya and his wife, actress, and dancer Natasha Stankovic celebrate Christmas with their family. The actress recently shared a number of photos from her Christmas party on her Instagram. In the photo, netizens noticed Natasha’s baby bump and raised speculations that she was pregnant for the second time. Natasha wore a pink strapless dress for the celebration of Christmas with Hardik, his family, and their dogs.

Their posts are flooded with comments; among them, one user wrote, “Hello, Natasha Jii Are You Pregnant,” another commented, “Agastya’s sister or brother is coming.” However, the famous couple has yet to confirm whether they are expecting their second baby together or not. Natasha Stankovic gave birth to her first baby boy Agastya during the coronavirus outbreak in July 2020. Hardik Pandya and Natasha Stankovic got engaged on January 1, 2020. They posted their captivating proposal video on Instagram, leaving fans in shock. Also, previously, Natasha was praised for her post-pregnancy weight loss journey.

Hardik Pandya is a renowned Indian international cricketer who has helped the team win matches with the bat and bowl several times. Pandya is an all-rounder, right-arm fast-medium bowler, and right-handed batsman. He played for Baroda in local cricket and the Mumbai Indians franchise in the Indian Premier League. These national players have the talent of helping teams to win matches single-handedly. Hardik Pandya was welcomed to the world on October 11, 1993, in Surat, Gujarat. He is currently 28 years old.

Hardik Pandya was born into a Gujarati family to entrepreneur Himansu Pandya and housewife Nalini Pandya. He also has an older brother named Krunal Pandya, who also plays for the Indian international teams Mumbai Indians and Baroda. Hardik got engaged to Serbian Indian dancer Natasha Stankovic on January 1, 2020. The popular couple welcomed their first baby, a son, on July 30, 2021, and named Agastya Pandya. Hardik lost his father on January 16, 2021.

Natasha Stankovic is a Serbian dancer, model, and actress from Mumbai, Maharashtra, India. She is mainly involved in Hindi films and television shows. Natasha made her Hindi film debut with the political drama Satyagraha, which was directed by Prakash Jha. She joined Bigg Boss Season 8 in the year 2014, where she was in the house only for a month. She became famous after performing in the famous song “Dj Waley Babu,” which was sung by Badshah. Natasha is the wife of popular Indian cricketer Hardik Pandya.

Natasha Stankovic was born and raised in Pozarevac, Serbia, in Europe. For her education, she attended Ballet High School in Novi Sad, Serbia. Natasha has always been fond of acting. She loved acting since her childhood and had studied only up to the 12th standard. After Natasha finished 12th grade, Natasha moved to Mumbai, Maharashtra, India thinking she would become a good actress and then worked hard to improve her acting, appearance, and impression and participated in many model shows. And today she has become a good actress. She is also a good dancer.

Natasha came into the spotlight after making her appearance in the song of rapper Badshah’s DJ Waley Babu and Nach Baliye 9. Hardik Pandya got engaged to actress and model Natasha Stankovic on January 1, 2020. And their engagement photos were shared on social media networks. Natasha and Hardik reportedly met at a nightclub in Mumbai. This is where their love story begins. After meeting at a nightclub, the two started dating and fell in love with each other. The photos of both of them were also revealed during dating. Reportedly, the two had also celebrated their Diwali together with their families. Also, the two were often seen together on many occasions. At the same time, the two continue to share photos on social media. On the other hand, when we discuss Natasha, she is also seen with Hardik at the cricket parties.

Also Read: Are Madelyn Cline And Zack Bia Dating? All About Their Relationship