Is Fortnite Chapter 2 Ending? What All We Know 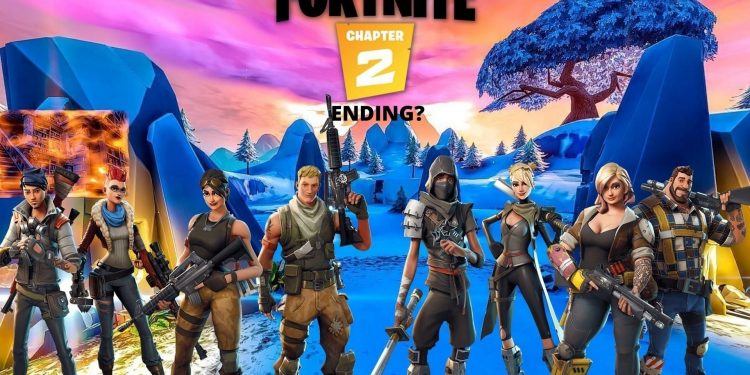 When will Fortnite Chapter 2 end? or when will the next chapter come out? or Is it already released? In this article, we are about to provide a lot of information about chapter 2. Also, we will answer the most asked questions related to Fortnite Chapter 2 and Chapter 3. So, read on to know everything in brief. But before proceeding, those who don’t know much about Fortnite. So, Fortnite is a video game that is capable enough to provide you with battle royale experience.

Epic Games are the publisher as well as the developers of the game and Donald Mustard is the director of this free-to-play video game. Fortnite game is an entire series of games with different chapters. Also, Microsoft Windows, PlayStation, Xbox One, Xbox series X/S, iOS, Nintendo Switch, and Android users can easily get the game on their device. Furthermore, the game’s first chapter and the first look were out in 2017. Talking about its gameplay, a player can play either solo or in duo or he can call his friends to complete a squad of four people. It’s an online multiplayer game and both FPP and TPP modes are available.

Yes, Fornite Chapter 2 has already ended and we have a new chapter from the publisher’s end. It ended on December 4, 2021, at 4 pm and the end of the chapter was announced in an event. The event is all over the internet with the name Chapter two finale event. The game’s Twitter account announced the news, date, and time very early this month. Also, they were all set to launch the new chapter. Right now, we don’t have an idea about the number of seasons in the new chapter.

Well, the makers of the game published the playlist of the event just before the event started. The new chapter of Fortnite is already out and the 1st season is out as well with more advanced concepts and ideas just like the previous ones. Further, Fortnite Season 2 ended with 8 seasons, and the first chapter of Fortnite ended in October 2019 with 10 seasons. So, players must get ready to conquer the new updates, plots, outfits, characters, enemies, and challenges that the makers of the game will put in front of the players.

How was Fortnite Chapter 2?

So what was the journey of the Fortnite players? Was it amazing or just like other Battle Royale games? According to so many positive responses for the game, Fortnite was standing out and that’s the reason players continued to join the game. The reasons were the updates and the themes that the makers were selecting, like for season 1 it was New World, season 2 involved the players in Top Secret. Furthermore, Season 3 brought Aquaman Season 4 brought Marvel Heroes, and so on. So, what was in the game that was so exciting for the players? Read on to know about Fornite Chapter 2 and its seasons in brief.

Fortnite Chapter 2 Season 1 was out after the end of Chapter 1 season 10 in October 2019. The end of this season was postponed two times, first on February 8 and the second time on 20 but it ended in February 2020. This was the New World for the Fortnite players as it had a lot of changes, from maps to new modes. The game became even more exciting after this update. Picking up knocked teammates, fishing for loot underwater, adding boats and further updates. Players started loving everything in the game and hence it touched millions of active players.

The next season was very cleverly designed so that players can have the best loot but after defeating some stronger bots. Well, What does it mean? So, the theme of the season was Top Secret which means there is something adventurous and mysterious in the game.

There were many landmarks on the map and players had to arrive there and defeat all the strong agents or bots to get the desired loot. Also, there were amazing outfits and other updates in the game and it started in February but it should have ended by April. However, the makers extended the dates and it finally packed up in June 2020.

The next Season was out just after the end of the 2nd season, in June 2020. But Season 3 lasted for 2 months and ended in August 2020. Well, this season’s theme was Aquatic and what was the name? Splashdown. Sounds interesting! The game had amazing updates including only water. Like, there was a storm front that protected the play area where players faces many challenges. Further, Aquaman, the well-known superhero of the DC Extended universe was promoting himself on the game. The new map that was a part of the game was Coral Castle somewhat like Atlantis.

Also Read Fortnite Chapter 2 Season 3: What Theme Can We Expect!

After DC’s Aquaman, it’s Marvel’s turn. So the next theme was Marvel and the name of the season was Nexus War. How many heroes and supervillains are there in Marvel Universe? A Marvel fan must be knowing about it but Fortnite Chapter 2 Season 4 has many of the famous ones’ outfits in the game. What about the gameplay? Well, the updates had a battle just like Marvel. A player has to stop Galactus to capture the Zero Point that is there on the map. If the villain captures it then the map may destroy and game overs. So, the players and superheroes give a tough competition to the villain and they try hard to defeat him. Also, Galactus is no less than any heroes here in this update.

After the end of the most exciting season, we got a new season with more new things in the updates. First of all, season 5 was out in December 2020 and paced up on March 2021, quite a big season! The makers included quests in the game. Earlier players had to play the bigger maps to get rewards but now, in this season, they just need to complete quests. These quests with smaller tasks were provided amazing rewards and some game currencies also. These currencies can be used in-game and if a person wants, he can add it too by paying for it. Furthermore, the theme for this season was Hunter.

Fortnite’s Battle Royale becomes Wild. Well, the theme of the next season which is Fortnite Season 6 was Wilderness. And the name of the season was Primal. It was out in March and left us in June 2021. Now, Zero Point is included in every season from season 4th. And we have it in this one also. So, Jones, the protagonist team up with other leaders and try to solidify Zero Point again as this point is somewhat the soul of the map. Further, we have new characters in this season like Lara Croft that was from Tomb Raider, Raven, and Aloy, etc.

Also, Read Fortnite Chapter 2 Season 6: ALL You Need To Know

As the players get different challenges with different themes through Chapter 2, now we have Aliens. In Season 7, Aliens attacks the map and there are UFOs all around. What they do is, teleport the players and throw them to different places within the same map. Here, the battle has a plot and it becomes more and more intensive. Later at the end of the season, the leader of the battle who is helping the players gets success. Further, the battle pass has the famous Superman and Rick. These are for the promotion of Rick and Morty.

Here we come to the end of Chapter 2, the most thrilling season that fetched a lot of attention. That’s because till now Fortnite gained a lot of positive reviews and attracted millions of new players. So, the theme is Darkness or Cube and the name was Cubed. On the map, there appear cubes that crash throughout the map and the cubes have their Cube Queen, the Golden Cube. These cubes are enough to create sideways and wreak havoc. This results in giving way to new challenges for the players. Golden Cube is extremely aggressive as she wants to destroy everything and the island. So, it’s all on the players to destroy these unwanted things. This season was out in September 2021 and ended recently.

Also Read: Fortnite Chapter 2 Season 8: When Can We Expect It?

BL Anime Sasaki To Miyano New PV is Out Now