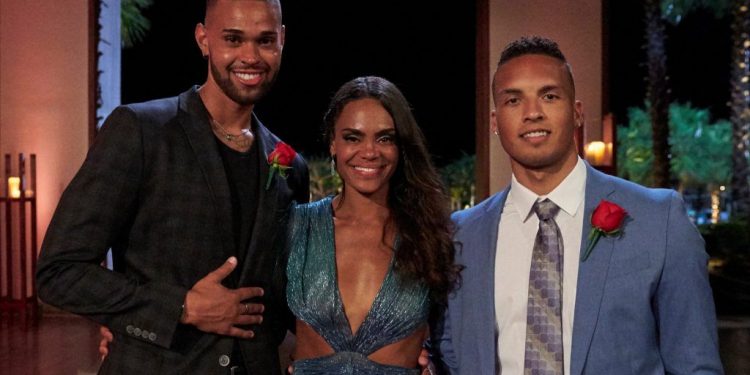 Is Brandon From The Bachelorette Dating Anyone

Michelle was left with two men: Brandon and Nayte, as we neared the end of a long Bachelorette journey. Fans had to wait until December 21 to find out who Michelle selected to spend the rest of her life with, and sadly for Brandon, Nayte was the winner. The runner-up had spent the majority of the season on social media flaunting his strong relationship with Michelle, asking people to wonder if he got the final rose. Now the question is, is he completely with someone else? Or Is Brandon From The Bachelorette Dating Anyone?

During the season, we used Brandon’s Instagram as our guide, and it appeared that he was dating Michelle. However, it appears that he was only sharing photos of himself and the titular Bachelorette to keep up with the show’s schedule from week to week. Brandon’s Instagram images of him and Michelle kissing, eating cake, and posing after rose ceremonies weren’t enough to convince Michelle to choose him. At the very least, he made the most of his time on the show, posting a photo of himself reading a dictionary shortly after he spelled “protein” incorrectly on national television. So, do you want to know who Brandon is dating? Is Brandon From The Bachelorette Dating Anyone? Read the entire article to find out.

Well, Brandon is not dating anyone right now, as far as we know. Brandon is one of the most eligible bachelors we’ve seen on the Bachelor Nation over the years. He teased viewers by releasing multiple images with Michelle up until the final rose ceremony, which left everyone perplexed. Some people even predicted that they would marry.

Despite not being picked by Michelle, Brandon hasn’t erased any of his posts with her, which could indicate that he hasn’t moved on, and the memories are still vivid in his mind. He also wrote a sweet post to Michelle on December 14, telling her that he will always be by her side, regardless of her decision. Furthermore, we haven’t heard any reports or speculations about Brandon maybe dating anyone. So, until the bachelor himself confirms, it’s safe to assume that he’s single.

What happened to Brandon Jones and Michelle Young in ‘The Bachelorette’ Season 18 finale?

Moments before Michelle and Brandon’s breakup in The Bachelorette Season 18 finale, the contestant truly believed that he was going to marry the lead. Brandon had received Michelle’s family’s blessing earlier that week. The 28-year-old teacher also confessed her feelings for her suitor. Michelle felt she couldn’t afford to lose her final pick, Nayte Olukoya.

Michelle had no choice but to leave the relationship after Brandon’s lovely proposal. Both sides were in tears by the end of the breakup. Brandon appeared to throw the Neil Lane engagement ring into the trees in the reality show to illustrate his sadness. Brandon, on the other hand, made it obvious that he would be there for Michelle at all times. He also stated that he intended to fight for his ex-girlfriend. He realized, however, that there was nothing she could do because she just followed her heart.

Who Is Brandon Jonas?

Brandon started as a Lead at Jimmy John’s in June 2012. He worked as a referee supervisor at Western Oregon University. Jones worked as a Management Trainee with Enterprise Rent-A-Car from June 2017 to August 2018. Jonas also worked as a social media manager for Riverdale Landscape from August 2018 to July 2019. From January through June 2020, Brandon worked at Nike as a talent acquisition coordinator. He then worked for PeaceHealth as a vendor staffing specialist.

How Much Is A Rocket On TikTok? Gifts Price and Their Worth