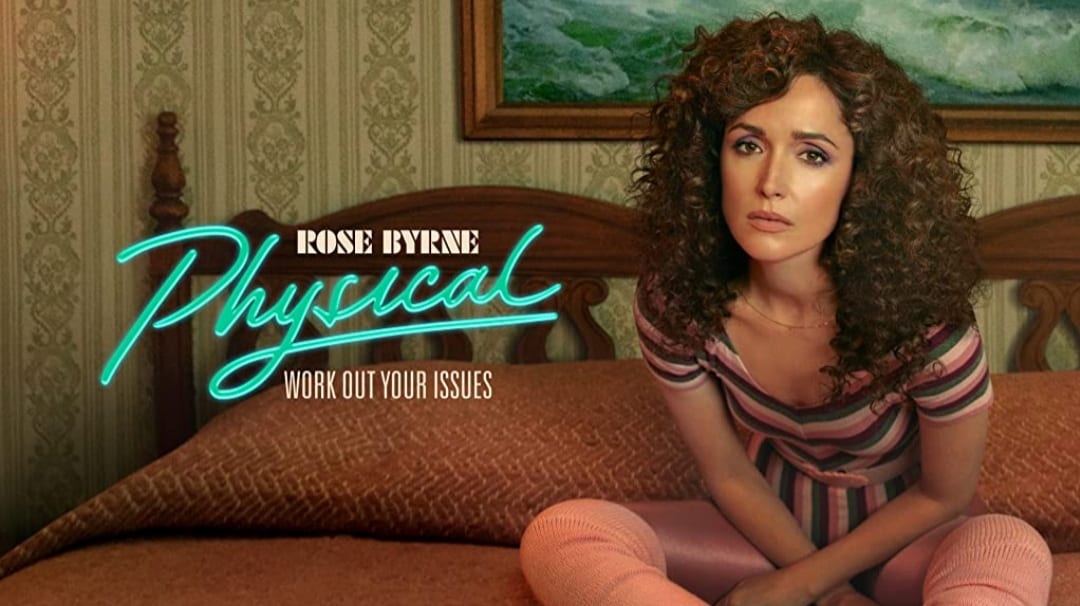 Physical is an Apple TV+ original show starring Rose Byrne as a woman striving to defy her inner demons. The show is set in 1980s San Diego with the backdrop of an ongoing feminist movement. The protagonist Sheila Rubin, played by Byrne, is a housewife trying to keep up with her duties in 1981. Sheila appears to have a good enough life. However, she is suffering from a horde of inner demons inside. Her demons are self-loathing and insecurity. Throughout the show, especially in the beginning, the visuals accompany her inner monologue. The inner monologue is difficult to hear, as it continues to show how vicious the whole self-loathing is.

As she traverses through daily life, the continuous stream of self-hating thoughts accompanies her. This outwardly shining but inwardly fractured and decrepit being of Sheila feels as if it’s based on true life. But is it actually based on a true story? We’ll talk about that later, but before we do, let’s take a look at the plot. What is the show about and what is the central main character Sheila’s background? All that and more, ahead. If you haven’t watched any of the episodes, read at your own discretion. SPOILERS AHEAD!

But before we delve into that, let’s go through its plot in detail for a bit. Sheila is a seemingly idyllic woman in 80s San Diego. She tries to be dutiful to her husband, who is another self-obsessed individual with little care for his wife. While Sheila is navigating through a storm ravaging her self-image and esteem, her husband is too busy to see it. And Sheila hides it pretty well too. She keeps appearances up. However, behind this supportive and ideal facade, lies a tortured psyche that berates and belittles Sheila’s sense of self. We soon see her demons taking over as she gives in to her eating disorder.

Every morning after Sheila drops her daughter at school, she frequents a drive-thru. Buying three burgers, she heads off to a motel room where she consumes her meal of shame. These two opposite lives take a toll on her and she seeks an outlet to vent it all out. Sheila eventually discovers a source for release. This source comes to her in the form of aerobics. During the period the show is set in, Aerobics was the biggest craze. The show is set at the advent of the said craze. When Sheila finds about the fitness entrepreneur named Bunny, aerobics intrigues her.

The world of aerobics becomes the journey for her empowerment. At first, she is simply hooked on the exercise. However, when she discovers this new technology of videotape and its power, a new life begins. She merges the power of videotapes with her passion for aerobics. This leads to a business that revolutionizes the whole industry. We follow this arduous journey of hers, as she makes a transition from a self-deprecating woman to an empowered one. Certain things make the viewers ponder over the story of the show.

Is Physical Based On A True Story?

Apple TV+’s Physical is not based on a true story. However, show creator Annie Weisman wrote it, taking inspiration from her own past struggles with an eating disorder. She also grew up around a similar area and setting, which also factors into the show’s look and world. So while the show is not strictly autobiographical, it borrows from her own past experiences. Talking with The New York Times about the show, Annie shed some light on her experiences that shaped up the show. She talked about growing up in San Diego in the ’80s, during the “first wave of women discovering the workouts.” “A big part of my early adolescence was creating that wave,” Annie added.

So Physical is not an autobiographical show but a story that contains autobiographical elements and inspirations. Writing the show, according to Annie, was her effort to delve into her own childhood. She wanted to explore her own childhood, the time, and what it was like for her parents. Physical is show creator Annie Weisman’s effort to tell a story that hits close to home. It’s not a retelling of her life events but loosely based on some of her experiences growing up. The show has received generally favorable reviews so far. Critics have lauded Byrne’s portrayal of a self-loathing woman that’s at times, difficult to watch. Despite being a difficult watch, however, the show tells a great story of women’s empowerment during the 80s.