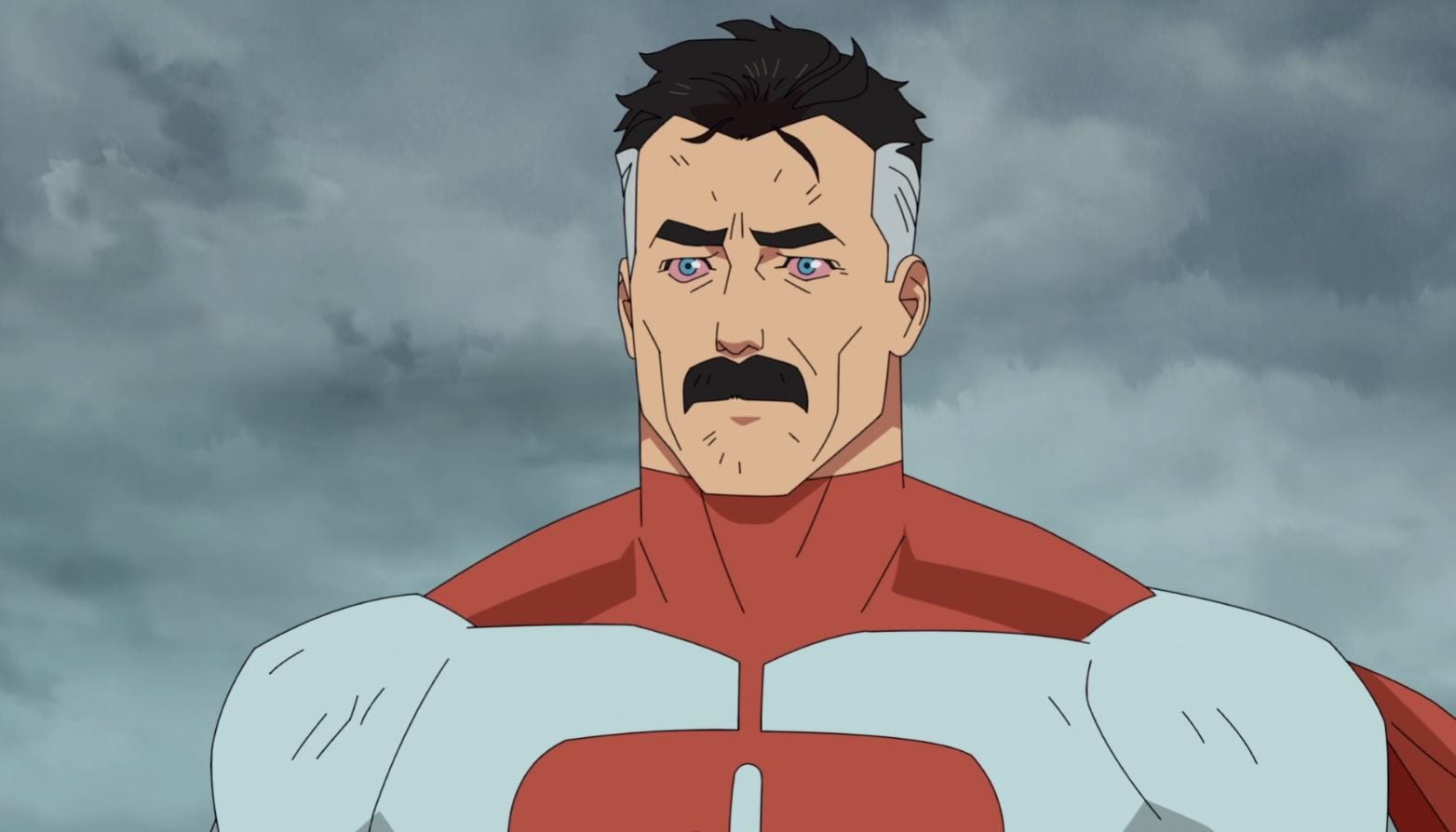 Invincible is an adult animated TV show based on the comic book series of the same name by Robert Kirkman. The comic book series has a total of 144 issues, all written across 15 years. So, when the news came about an animated series coming out, fans were left ecstatic. This could be particularly seen from the high rating the show gets weekly. After the comic book series ended in 2017, it was only on 19th June 2018 that Amazon ordered for a series season one to be produced consisting of eight episodes. The first season finally began its premiere with 3 episodes on 26th March 2021. Thereon, the show followed a release pattern of one episode per week. Now that we are headed to the final episode, this article will discuss the episode preview for Invincible Episode 8 while also giving a recap for the previous episode.

Invincible Episode 7 is one that takes on the most important job to set up things for the last episode. This episode prominently deals with everyone someway or another trying to get a hold of Mark. While Debbie wants him back at home, Cecil tries to take him down. On the other hand, Omni-Man is searching for him as he needs to reveal to Mark what has been happening. He needs to talk to Mark, the conversation which will reveal why Nolan killed the Guardians of the Globe. But this isn’t the best part of the episode, as we see another set of fights in the episode as well. While the world watches Omni-Man going on a rampage, this makes us question if he really is evil. No matter what the reason is, Nolan isn’t trying to hide it anymore, meaning there is some bigger motive at play. 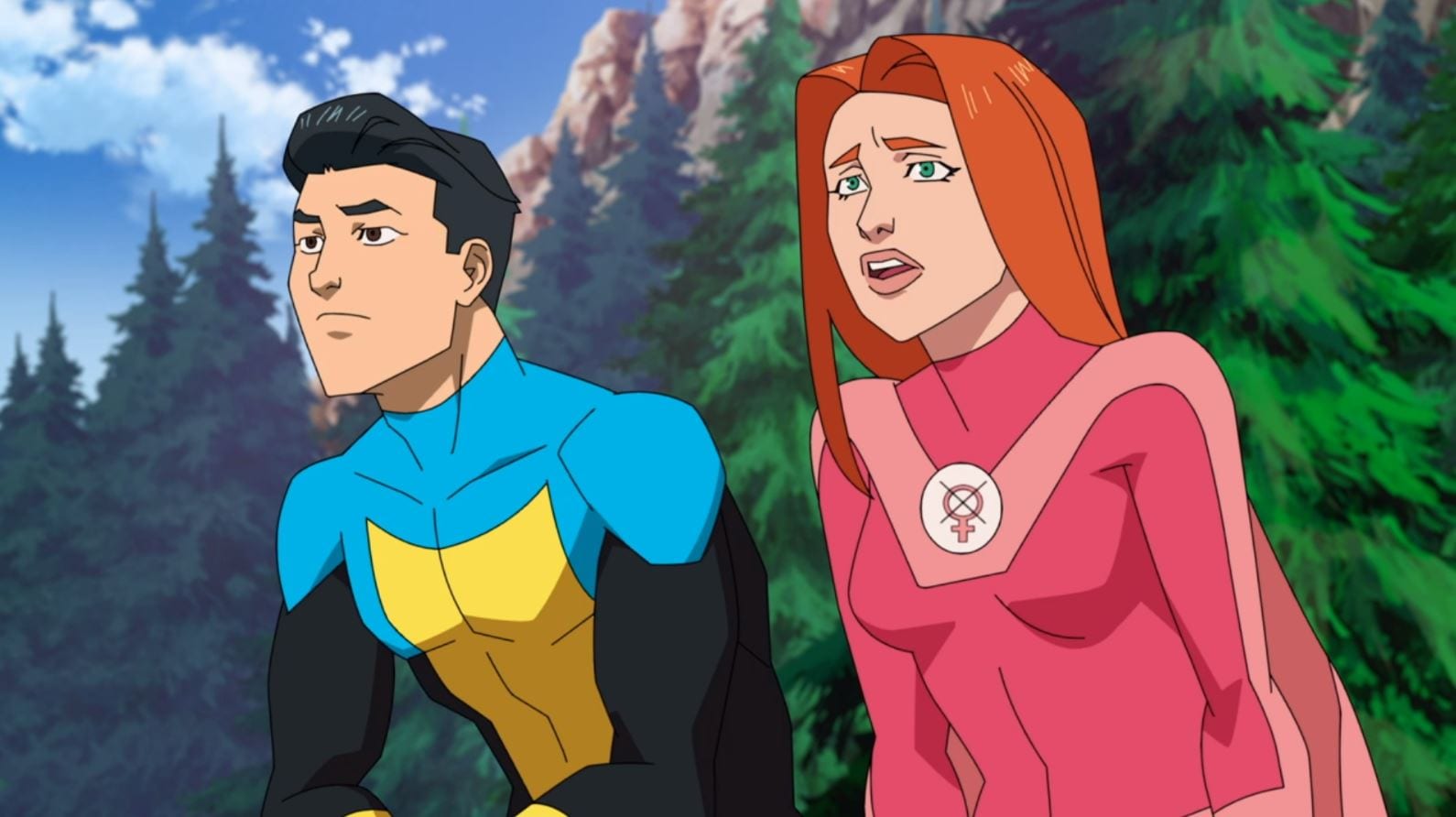 Invincible Episode 7, titled “We Need to Talk,” starts off with both the Grayson men facing off with their significant other. After last night’s conversation, Debbie is up at it again as she asks Nolan for answers. Nolan truly can’t reveal anything as he asks her to trust him and that he did not have a choice in killing the Guardians of the Globe. She asks him to leave home while she rings up Mark to come back. But just then, she is picked up by the Guardians of the Globe. On the other hand, Mark reveals his superhero identity to Amber. But she claims that she had already figured it out. So, she breaks up with him in the context that he did not trust her with the secret. For having a talk, Mark heads to confide with Eve.

Elsewhere as Cecil plans to takedown Nolan, he realizes that only Mark can go toe-to-toe with him. Nolan himself is trying to find his son when Cecil attacks him with a satellite. But as the attack fails, Cecil sends over some dead soldiers along with some monsters and Kaiju to possibly kill Omni-Man. Meanwhile, as Mark joins Eve, he finds his dad in trouble. Therefore, he heads to help him. Debbie asks Cecil to stop the attack, but he claims that he can’t, as he doesn’t know on whose side Mark was. In the meantime, the Mauler Twins are successful in bringing Immortal back to life. The moment he wakes up, Immortal heads to Omni-Man to take revenge for his team. However, as news choppers fly by, Omni-Man defeats Immortal as he tears his body apart in two. The episode ends with Nolan wanting to talk to Mark. 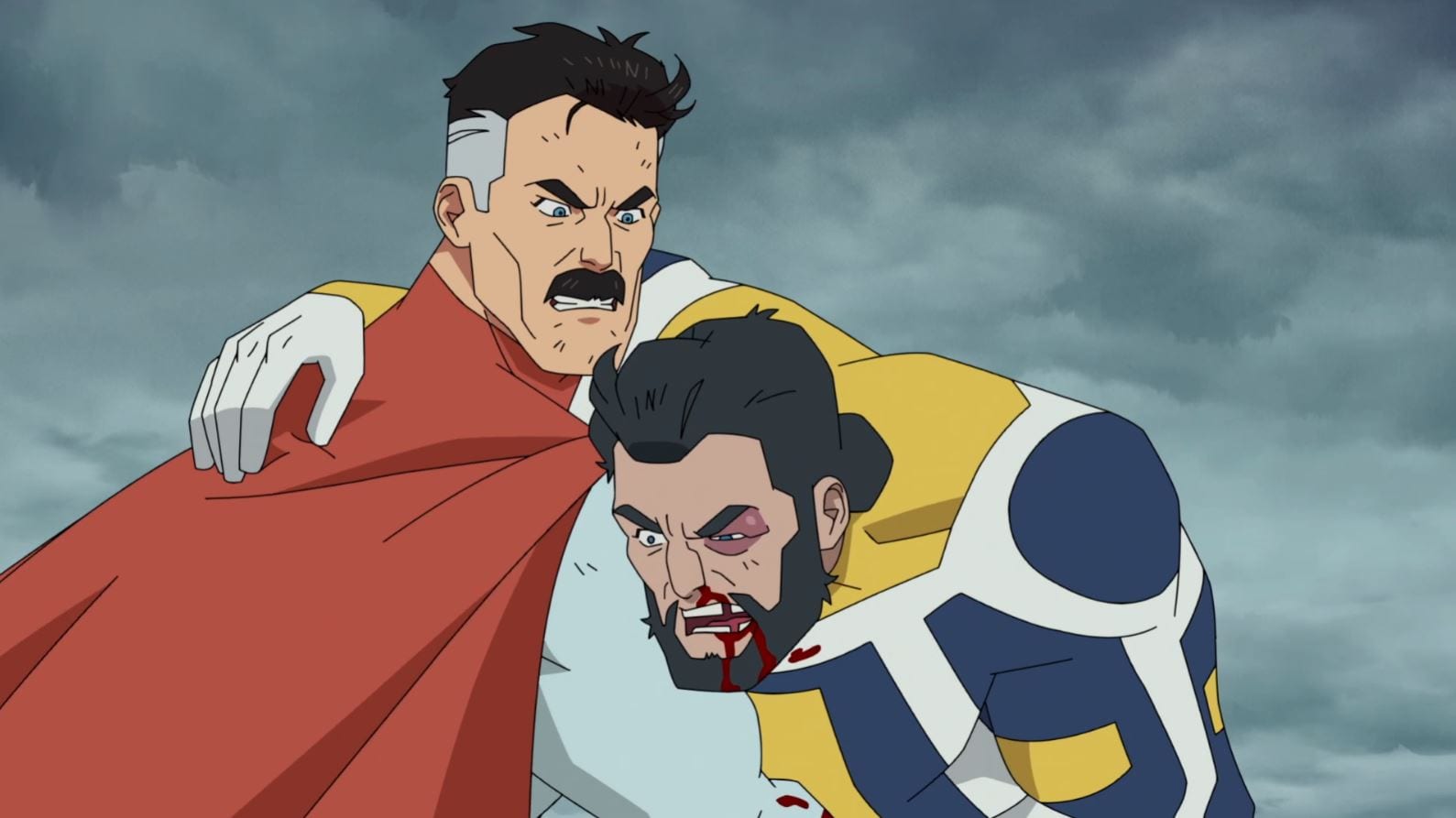 The Robot reveals his plans to the Mauler Twins as the lifeform they were growing was one made as Robot’s new body. He wanted to transfer himself into a human body, for which he takes the Twins’ help. As Robot’s lifeform is transferred, the Mauler Twins try to replicate his consciousness to the body as well. This does have some issues, but they are successful as the Robot in a human body appears from within a lab on fire. Now, the Huma-Robot tries to send the Mauler Twiins back to jail. For this, he uses two robots to fight the twins along with a larger robot to assist. 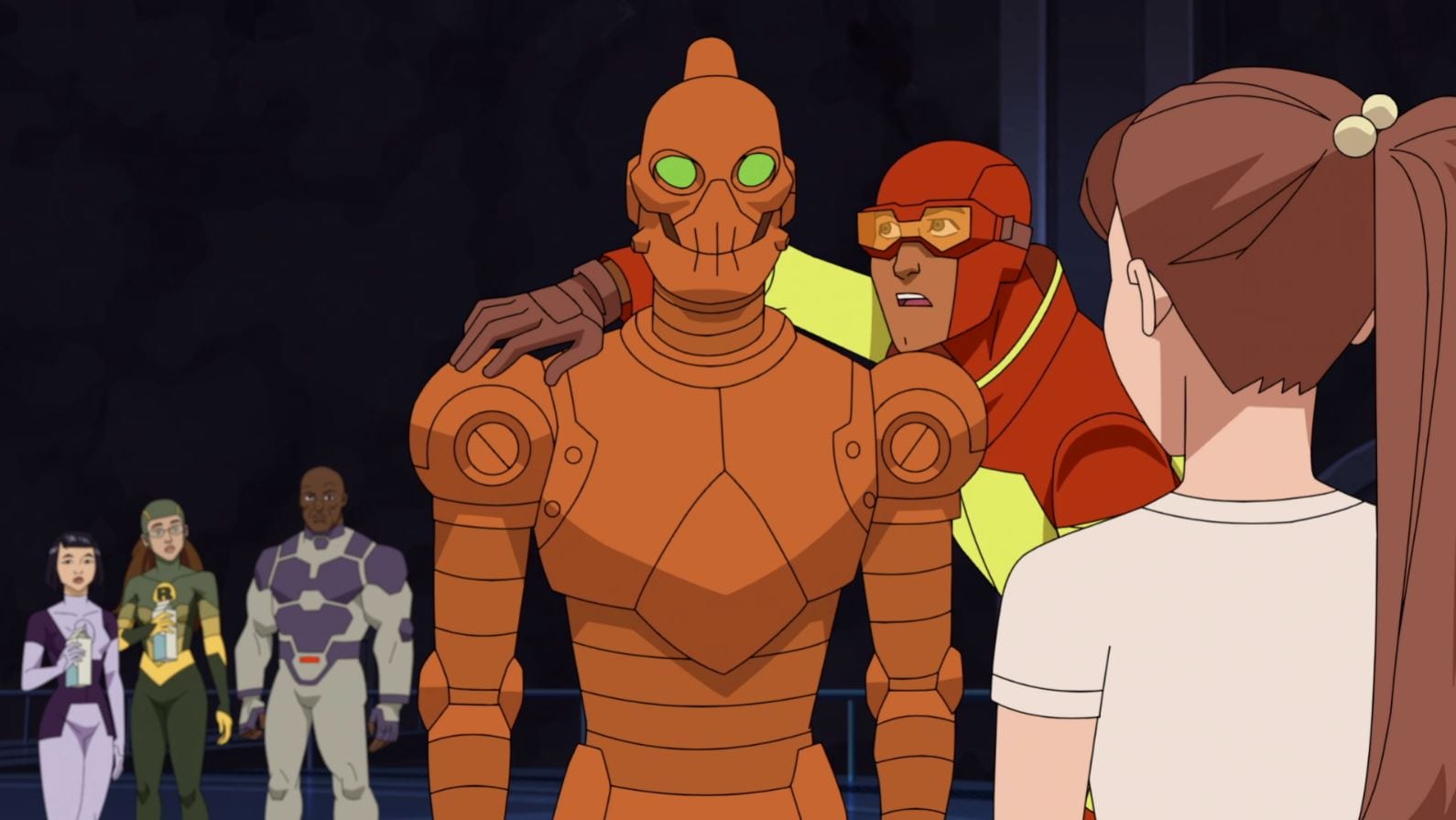 Later, Robot reveals his new form to the new Guardians of the Globe. During this, Rex wonders why the Robot looks like a younger version of himself. This was because Robot tried to make himself appear this way for Monster Girl. Monster Girl is touched by the gesture while the other members of the team think of Robot’s actions as bizarre. Nevertheless, they do not have much time to address this as their main focus of concern at the moment is Omni-Man. The Robot even vows to help Monster Girl to escape her own body while also revealing how Monster Girl took an interest in Rex.

Also Read: Invincible: Who Is Atom Eve? The True Extent Of Her Powers

When Will Invincible Episode 8 Release?

Invincible Episode 8 is set to be released on 30th April 2021. The episodes by Invincible are set to be aired at 3 am ET/ 2 am CT. This show follows an episode release pattern of one episode every Friday. Make sure to change the above time to your local time zone to watch the episode when it airs. However, it is noticed that Amazon is a bit too easygoing with its episode release schedule.

This could be noticed with the last episode that ended up actually releasing on Thursday instead of Friday. This could be a little treat for the fans who were eagerly waiting for the new episode. This episode will be the season finale for Invincible. And if you wish to watch the whole season from the beginning, all the episodes will be available together in the Amazon Prime Video library.

Invincible Episode 8 will have Nola finally having the talk with his son, Mark. He was the one who killed the Guardians of the Globe and will finally reveal it to his son as well. The truth is quite harsh for a boy who thought his father was a hero but instead murdered the Guardians of the Globe. Luckily, we will finally know the reason why Nolan did so, finally getting closure to the question ever since episode 1. The truth is about to leave Mark devastated. Along with this, we may even get some insights into Cecil and what he really has been up to. In the promo, while we do get glimpses of shocked members of the Teen Team, we even see Debbie display the same reaction as well. Lastly, there is about to be a huge fight that might leave Omni-Man decapitated.

In the last episode, Invincible helped out his dad fight a few monsters left by Cecil. Cecil had done so, claiming it was to stop Omni-Man from his killing spree. But more of this can only be known in the upcoming episode. Nevertheless, Mark witnessed his dad murder the reanimated body of Immortal. This was more than enough for one to realize that not everything is alright in the Grayson family. Cecil, too refused to stop his monsters as he was unaware of whose side Mark was. Mark himself will find out the answer to this question after he has the most-awaited conversation with his dad.

Where to Watch Invincible? 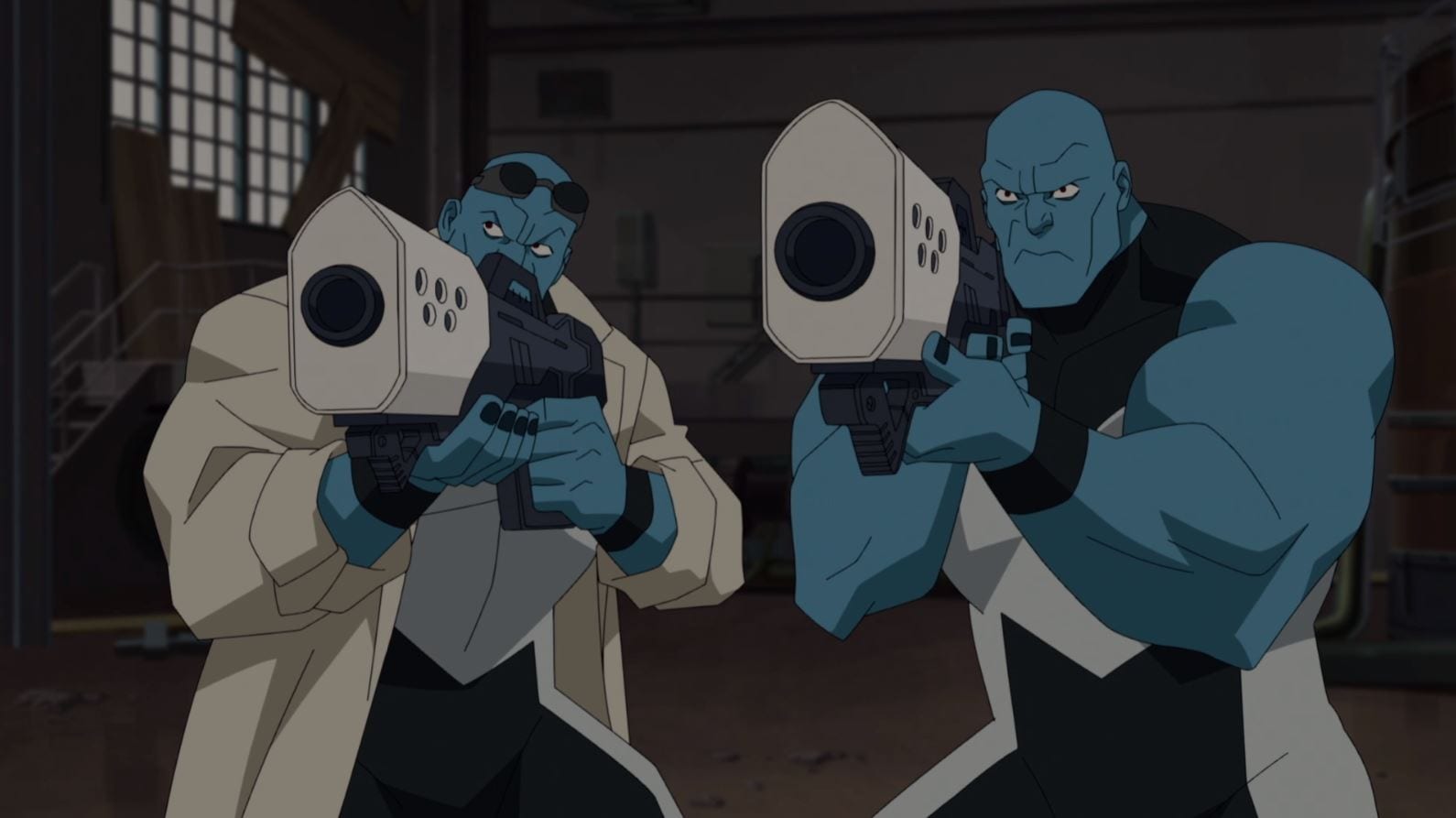 The episodes by Invincible are available for one to watch as they air on the set time on Amazon Prime Video. These episodes all have a runtime of somewhere around 43-48 minutes. And all of the episodes of the show will be available to watch from this Friday on the streaming platform. If you wish to subscribe to Amazon Prime Video in the US, you can get a subscription for the price of somewhere around $119 a year. If one does not wish to get a yearly subscription, they can even choose to go for a monthly subscription for $13 each. Furthermore, Invincible has 15 years’ worth of comics as source material, so a possibility for season 2 is quite high. So if you do like season 1, it only makes sense that you get a subscription for watching it next time as well.

Also Read: What To Expect From Invincible Episode 7?