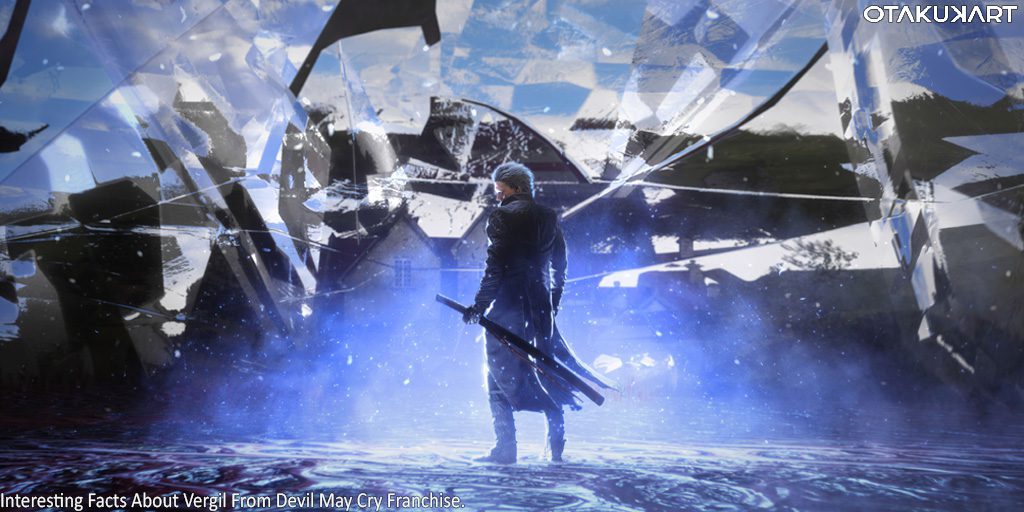 Vergil is the elder twin of Dante. He is a mysterious character throughout the franchise and, very few fans who are die-hard and veteran know much about him. Who is Vergil? When did he first appear? What is his past? What are some facts about Vergil that many do not know? In this blog, we will discuss some interesting facts about the mysterious character Vergil, which many of you don’t know existed. Vergil is an important character of the Devil May Cry franchise. He is the son of mighty and legendary swordsman demon Sparda and human Eva and is the elder twin brother of Dante. Vergil first appeared in the original game, Devil May Cry, as one of the secondary antagonists named Nelo Angelo.

He was a minion of the primary antagonist Mundus. Vergil as a character, is calm, cool, thinking, collected, and introverted. He fights honorably and does not like underhanded techniques like his younger brother, Dante. He uses Yamato, a keepsake from his father, and a half amulet. In Devil May Cry 5, he is divided into two parts as V and Urizen. V is the human side of Vergil and Urizen is the demonic and dark side of Vergil. V merged with Urizen when Dante defeated him, where Virgil revives back. Dante and Vergil fight again after reuniting but are interrupted by Nero, who defeats Vergil to end the sibling rivalry. Later, Vergil departs with Dante to Underworld, which is a one-way trip to cut the Qliphoth down and prevent the merging of the human and demon realm.

Interesting Facts About Vergil From Devil May Cry Franchise.

First introduced in the original Devil May Cry, Vergil shares the same character model as his twin brother, Dante. Though not entirely known why, one can guess that Capcom wanted the brothers to be twins in Behind-the-Scenes.

Vergil and Dante both share the same character model till the fourth game, at least, Devil May Cry 4. This copying really saved the developers some time from creating a character from scratch. But the developers did feature something new in Vergil, like Swords summons instead of guns that he throws at his enemy.

Creators wanted Vergil to be cooler than Dante

Bingo Morihashi, the writer of the Devil May Cry 3, had to create Vergil from scratch, as no model existed during the production of the game. Morihashi wanted Vergil, as the older twin, to look way cooler than his younger twin, Dante.

Vergil entered the game as the mature and no-shite character to appeal more to the fans, in contrast to Dante, who had his own arc to go from an ungrateful and mouthful character to a mature person.

Nelo Angelo in the first game is a devil and corrupted form of Vergil, which is Mundus’ doing. It is a good idea and all, but the name Nelo Angelo has a big problem in itself.

The original name of Vergil’s Evil form is Nero Angelo, not Nelo Angelo. The name was a mistranslation, but instead of fixing it, the dev has just gone on with it, making the name Nelo Angelo also canon. Somehow his son’s name was not mistranslated as Nelo.

Vergil never made it out of childhood and got killed in the original Devil May Cry. Mundus’s minions killed Vergil. Mundus then captured his soul and made him his minion as Nelo Angelo.

But the Devil May Cry 3 writer, Bingo Morihashi, wanted something different for the character. Hideki Kamiya, the original creator, gave Morihashi freedom to do what he wanted, and thus in Devil May Cry 3, Vergil was alive and fought Mundus in his weakened state and lost. Mundus then turned him into the Nelo Angelo. This retconned the original idea.

Vergil Has Playable Code in Base DMC 5

Fans love to do many things with games, like modding it, replaying it, breaking it while doing something the game does not allow, etc. One thing special they do is Data mining. And as with Tripple-A games, they do it to its barebone.