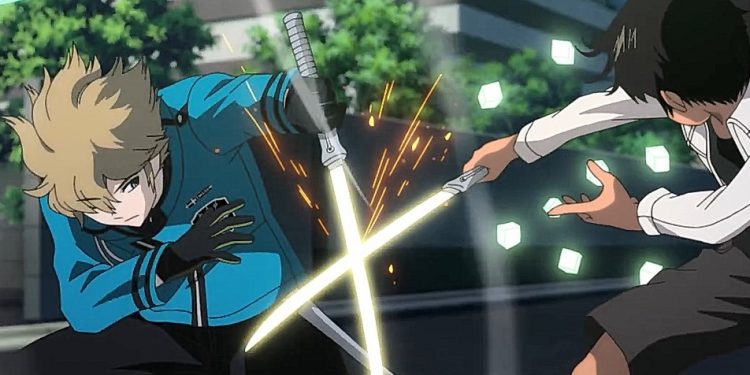 World Trigger-Season 3 Episode 13 reveals the final duel between Tamakoma-2 and other Squads. The B-Rank Wars battle has recently begun with Tamakoma-2 aiming to take two Squad down at once. During the battle, Hyuse gets cornered and faces Yuba and Ikoma. But other Squad members arrive and surround him. In the recent episode of World Trigger Season 3, Hyuse realizes that he is in danger since everyone tries to take him out. Yuba cuts Hyuse’s hand using bullets and protects Obishima from Inuka, attacking from the above. Ikoma learns that Yuba’s Squad is after Hyuse.

They realize they have to use pincer attacks against the enemies, and Inuka smiles that he hates it when a bunch of guys attacks one guy. The commentators reveal that eight guys are attacking Hyuse in the East. Hyuse is losing Trion since his arm is cut. Mizu uses bullets and positioning to push Hyuse to the center. Inuka is also firing at Hyuse. The commentators realize that Hyuse dominated Round 7 and the Captains realize that they have to stop Hyuse before he does that again. But they know that Hyuse will never go down quickly.

They know things will get better when Tamakoma-2 regroup. But, surprisingly, Tamakoma-2 Agents in the West are not joining the battle. The commentators think that Tamakoma-2 Agents might help Hyuse use Chika’s Southwest sniping skills. That would help Hyuse get out of that situation faster. But Agent Tonooka is ready to face the trio if they interfere to help Hyuse. Tonooka is the best sniper that can take anything out, and he is well-known for not missing his targets. The commentator thinks that Yuba might have warned Tonooka to keep his eye on Chika since Chika’s shield cannot stop an Ibis Shot.

Tonooka waits for Chika to attack, and he sees her on the rooftop and asks Yuba if he should start attacking them. Obishima agreed and Yuba told Tonooka to wait for his moment. Inuka wonders what Tamakoma-2 plans to do or if they want to move in stealth. He thinks that Kuga might be approaching and wonders why Ninomiya is quiet. Ikoma sent the message to his team and reminded them what they had to do. Shion communicates with Osamu and reveals that the other teams are warry of their snipping.

Osamu realizes that the time is on their heels and tells Hyuse to use chaos to escape when Chika shoots the Ibis. Hyuse refuses since he believes that he has a better plan than Osamu. He told Osamu to use Meteor and drop the first one on his position. Hyuse knows that if he gets lucky, he will survive, and if not, they will also take six guys near him. That would earn them four points even though he will also be eliminated. Osamu realizes that Hyuse made a huge sacrifice for his team.

But he is worried that Chika’s Meteor doesn’t have enough range. Chika realizes that she has to get closer to firing a Meteor to help Hyuse get his wish fulfilled. Kuga helps her to check the target point. Tonooka notices that Chika and Hyuse have moved, but the tank on the rooftop has blocked his view. The enemies also destroy Hyuse’s leg, and Chika finds her target and unleashes Meteor. But Toonoka shoots the top of Meteor and ruins the plan. Kuga’s shield helps them, and no one is injured after an explosion. Osamu realizes that the sniper from Yuba’s Squad ruined their plans.

World Trigger Season 3 Episode 13 will be released on 9 January 2022. Tonooka notices that the trio is on the move and pursues them. Kuga told Osamu to take the sniper down south if he tried to shoot them. Osamu decided that they must not get separated until they reached Hyuse. Hyuse survives 8v1. But Ikoma uses Whirlwind slash, and Hyuse contrasts that with Escudo Catapult that sends Ikoma flying. Let’s look at World Trigger-Season 3 Episode 13 official details.

You can watch World Trigger Season 3 Episode 13 online on Anime Digital Network & Crunchyroll on Sunday at 1:30 AM JST. You can also watch World Trigger-Season 3 Episode 13 online on Youtube Channel & VRV. Hyuse has become a tough challenge, but he has lost another leg. But he has lost a lot of Trion and taken Ikoma out. Hyuse, Mizukami also bailed out, and they learned that Hyuse’s secret weapon is Viper.

Hyuse has been using Viper to wipe out his enemies. Tamakoma-2 realizes Hyuse was taken down, but they earned a point, and Chika will have to get her target with a miss. The showdown continues in the next episode finale of World Trigger-Season 3. Let’s meet when World Trigger-Season 3 Episode 13 is released.

Who Does Shinra End up With in Fire Force?