Hyunckel and Crocodine’s Execution In Episode 61 of Dragon Quest: The Adventure of Dai 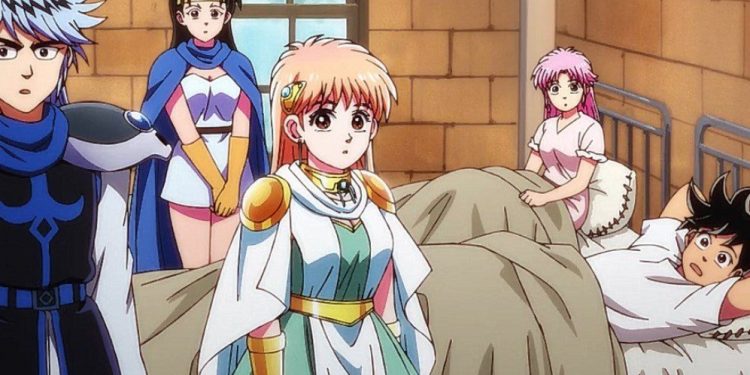 Dragon Quest: The Adventure of Dai Episode 61 reveals the Dark Army arresting the Hero Party. The Dark Army has captured Crocodine and Hyunckel. Crocodine thinks that it is better for him to die than to be a burden to Dai. Hyunckel agrees and thinks they should make something and explode along with the building. But Merle’s voice tells Hyunckle not to die. In the latest episode of Dragon Quest: The Adventure of Dai, Mystvearn tells Crocodine and Hyunckel to get ready for the execution at night in two days.

Crocodine thinks they are taking time to kill them, and they can do that. He thinks that they could instead take death than ally with Dark Army. Mystvearn reminds the two how valuable they are, and they take the Dark Aura and serve him. Crocodine was surprised when Hyunckel says he will think about that. He wonders if Hyunckel wants to betray Dai and the Hero Party. Mystvearn vanishes, and Crocodine scolds Hyunckel that he sells his soul to Mysvearn to survive. The Dark Army minion electrifies Crocodine, but Hyunckel keeps quiet since he cannot explain what is happening.

Crocodine tries to break the chains, but they squeeze him with the wall. He thought that Hyunckel was a man of true honor and could believe he was betraying him at the 11th hour. Hyunckel tells Crocodine to consider him as a friend and trust him. He believes that he will use this chance of survival and change things. Dai wakes up somewhere after dreaming where Dark King Vearn was killing him. Dai headed to the passage and heard voices talking about execution. The ladies believe that execution announcement is a trap.

Previously on Dragon Quest: The Adventure of Dai Episode 60

Inside the room, Popp, Leona, Maam, and other warriors discuss rescuing Crocodine and Hyunckle. Popp vows that he will do anything even if it means the end of the world. The princess adds that they will gather the Hero and head out. Leona talks about what Dai will do when he wakes up. Dai eavesdrops on everything and realizes that the Heroes are ready for war. Leona believes that Dai is the Hero of Hope. Dai wonders why they still have to fight after everything that has happened.

He heard Leona telling everyone she would check if he was awake, and Dai returned to his room. At the forest, Chiu and Gomechan talked about the member of Beast King Commando. He heard the voice of a person screaming and running. Leona arrives in Dai’s room and heads back to the meeting room to report missing Dai. Dai land outside and wonders why everyone expects him to do miracles which is impossible. He thinks that he is powerless and he cannot help them. The Heroes wandered around the forest searching for Dai.

Leona wonders if Dai has run away, and the princess thinks they should not blame Dai. She thinks that Dai is affected by his father’s death and losing his treated weapon. Leona wishes Dai was bothered by something he should have told them; The princess thinks Dai is unaware of what troubles him. Popp met with Dai and settled things, but Dai was worried about the Dark King. He realizes that they have to fight until the last breath. Popp reminds Dai about their goal to avenger Master Avan. Dai returns and talks with the Heroes.

Dragon Quest: The Adventure of Dai Episode 61 will be released on 11 December 2021. Dai told them about Holy Mother Dragon is more potent than God. He adds that he might be weak, but he won’t let King Vearn dominate the world. They decided to rescue Hyunckel and Crocodine in the evening. Leona also decided to join them. Let’s look at Dragon Quest: The Adventure of Dai Episode 61 official details.

Shawn Mendes’ New Girlfriend: Who Is The Musician Dating In 2021?

Battle on The New Moon Part 1 In Episode 11 of Yashahime: Princess Half Demon – The Second Act