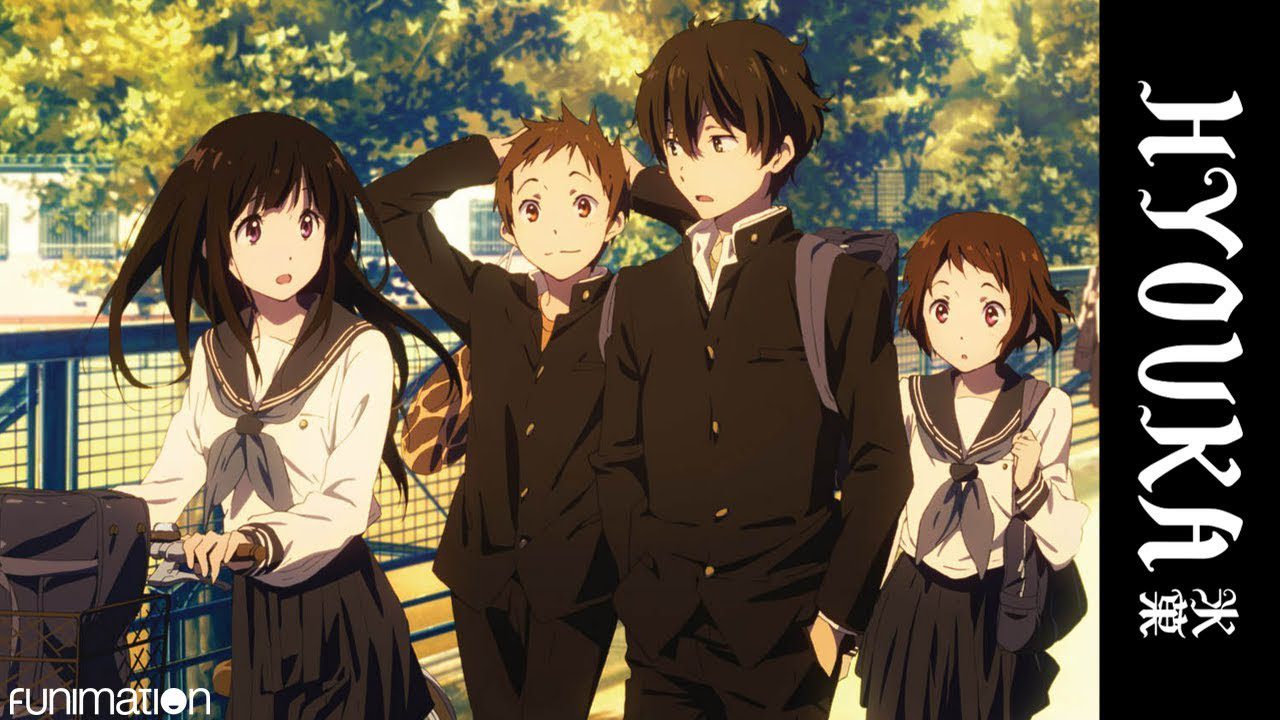 There are some things in our life which we will still remember despite how much time has passed. One such thing is with Hyouka. Produced by Kyoto Animation and directed by Yasuhiro Takemoto,  Ever since it was released back on 31st October 2012, everyone has loved it, and after the 22nd episode of the first season was aired on 16th September, fans began to ask about Hyouka season 2 release date. Nearly nine years have passed, and let’s look at if there are any hopes for a season 2 of Hyouka. Along with this, we will also look at its possible release date. Hyouka in Japanese means Ice Cream. This series is based upon the 2001 Japanese mystery novel written by Honobu Yonezawa.

After the first volume, Honobu wrote five more additional volumes for the novel as part of the Classic Literature Club series. Later there was also a manga adaptation drawn by Taskohna. The franchise also saw a live-action film, Hyouka: Forbidden Secrets which was directed by Mari Asato and with Kento Yamazaki and Alice Hirose in the lead role. The movie was released on 3rd November 2017. In this article, we will be looking at Hyouka Season 2 release date. Yes, about season 2 of the anime. Before we look at the Hyouka season 2 release date, let’s do a quick recap of the Hyouka Season 1 plot. 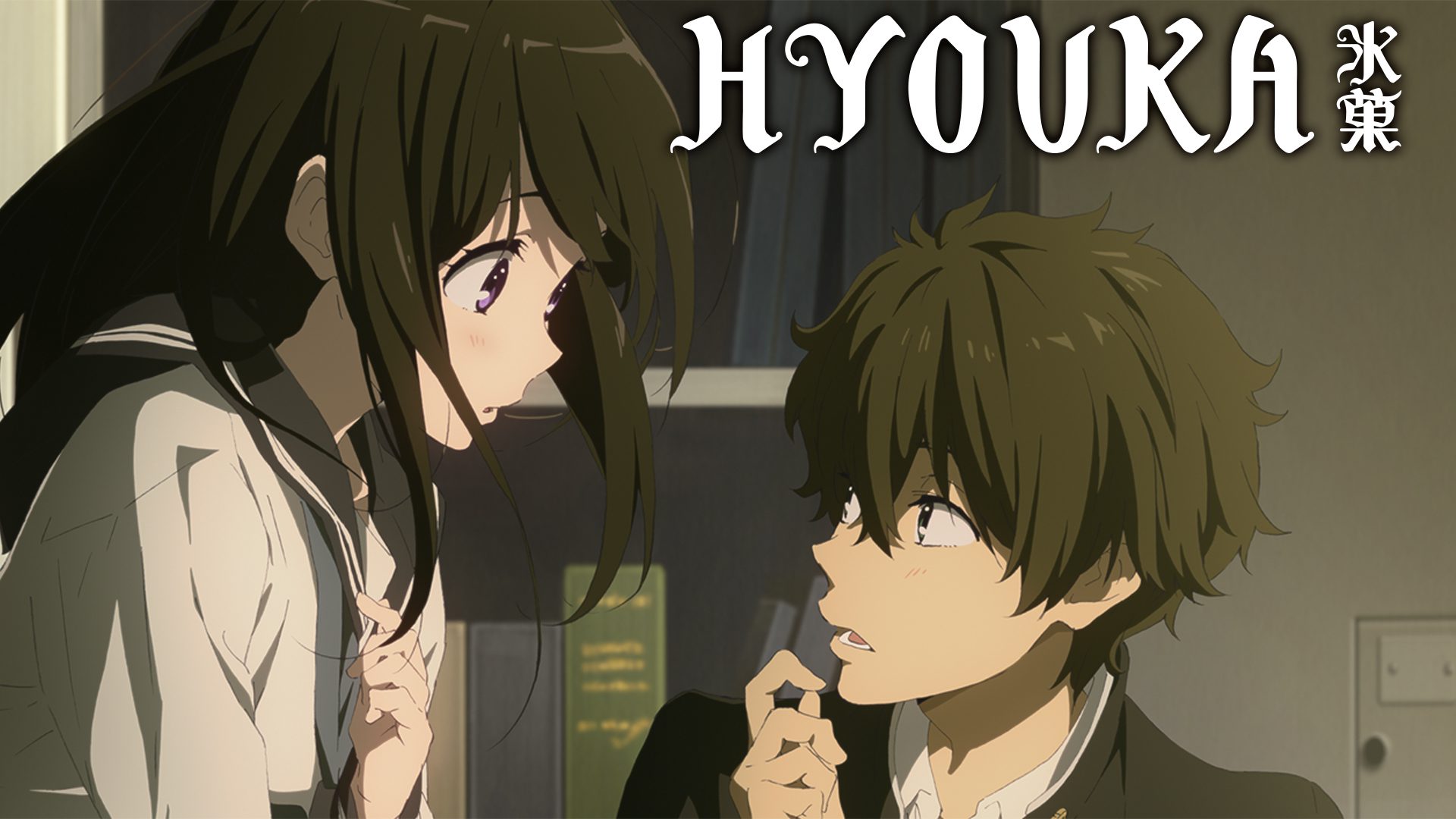 Hyouka in Japanese means Ice Cream. This series is based upon the 2001 Japanese mystery novel written by Honobu Yonezawa.

The story of the series revolves around Hautraou Oreki, a student inclined towards the grey side of life. He is a lazy head who is not interested in making his life interesting. While other students are busy joining clubs and involving in various activities, Hautraou just prefers to lead a tasteless life without any motivation to join clubs in the school. And as you can guess, he is an introvert as well as a Lazy Head. 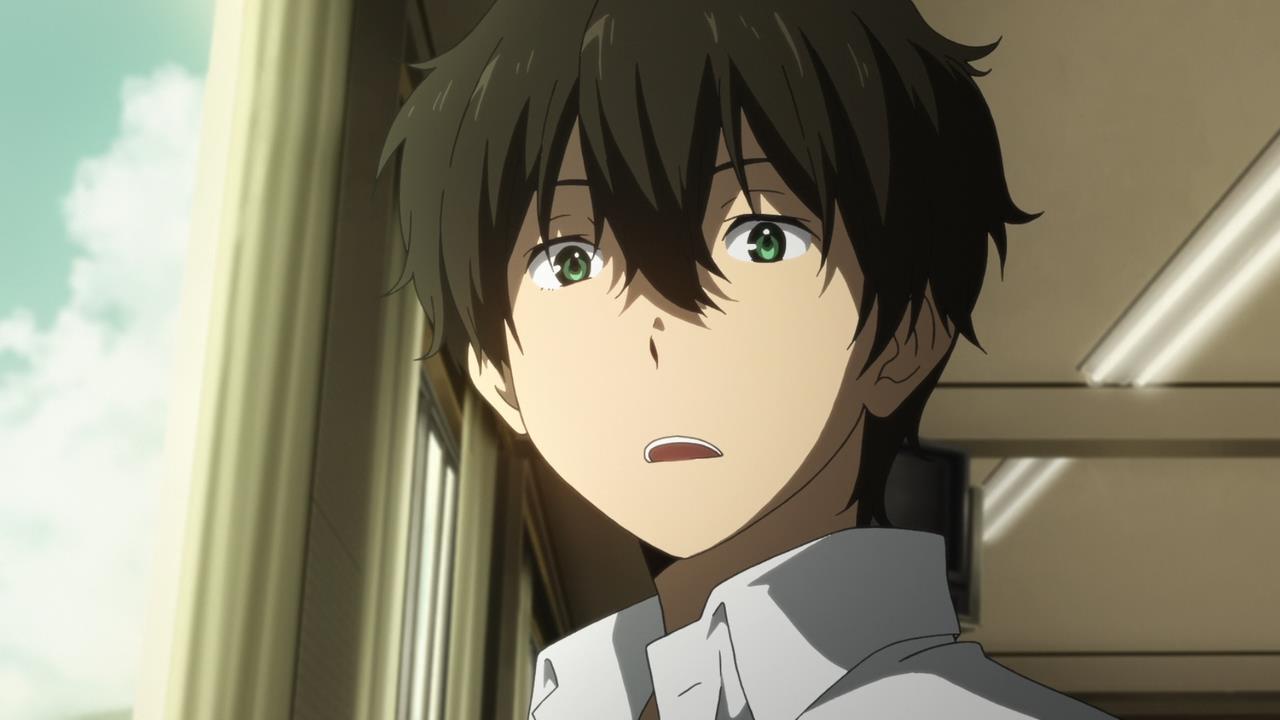 The story of the series revolves around Hautraou Oreki, a student inclined towards the grey side of life.

But he is not always a lazy head, as when it comes to achieving something that he wants to, he tries his best to achieve that. His sister identifies his skill of deductive reasoning, and she motivates and guides him towards joining the Classic’s club. The club was facing the issue of closing down as all of its previous members have graduated.

Since he doesn’t want to refuse his sister, he decides to join the club, thinking that this won’t change anything in his life. It seemed to be true as he thought that he was the only member of the club, until he saw a beautiful girl, standing near the windows and looking outside, as he steps into the club. She notices Oreki and introduces herself as Eru Chitanda from Class 1-A. Later Hautraou’s old friends Satoshi Fukube and Mayaka Ibara also join this club. 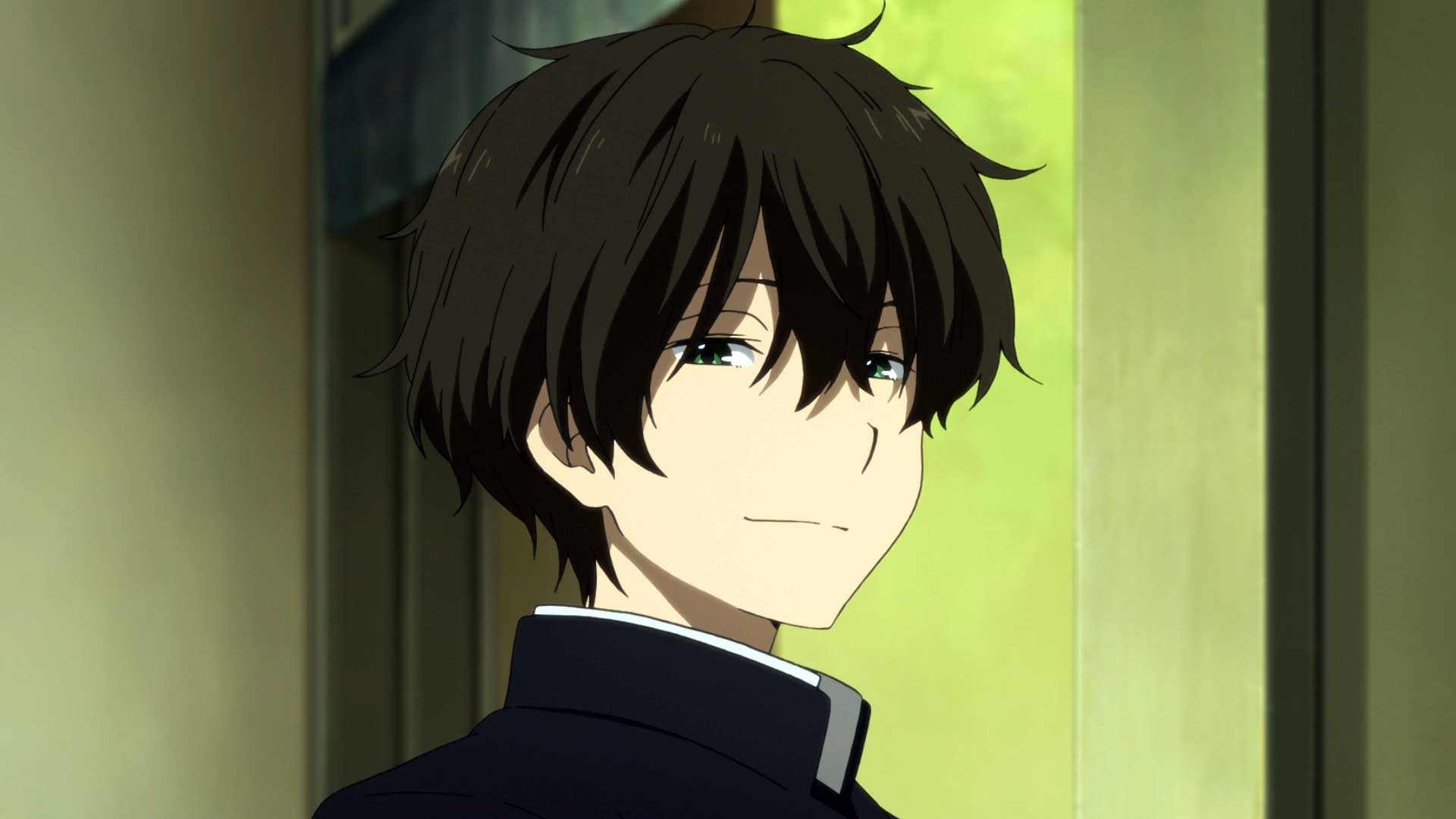 Hyouka’s sister identifies his skill of deductive reasoning, and she motivates and guides him towards joining the Classic’s club

We would like to tell you the entire plot of season one of the series, but we don’t want to ruin your experience with this series, as we want you to watch this series if you haven’t yet. There is a reason why fans of the show came here searching for the Hyouka season 2 release date, even after nine years since the series has premiered. Now let’s look at each character of the series.

Now let’s take a look at all of the characters in Season 1 of the series. We expect that whenever Season 2 of the show happens, they will also make their way to Season 2.

We are pretty sure Hautraou will be returning for season 2 of the show since the show centered around his life and adventures. Hautraou is a self-centered teenager who has no care about anything in this world and always has a blank expression on his face. He is quite the opposite of other teenagers. We could always find him being a lazy head. But he is a brilliant student with excellent deductive skills through which he can solve puzzles. This skill becomes useful for him to solve the mysteries of the club later in the series. Thus he alone proves to be a greater asset to the group than all of the others. 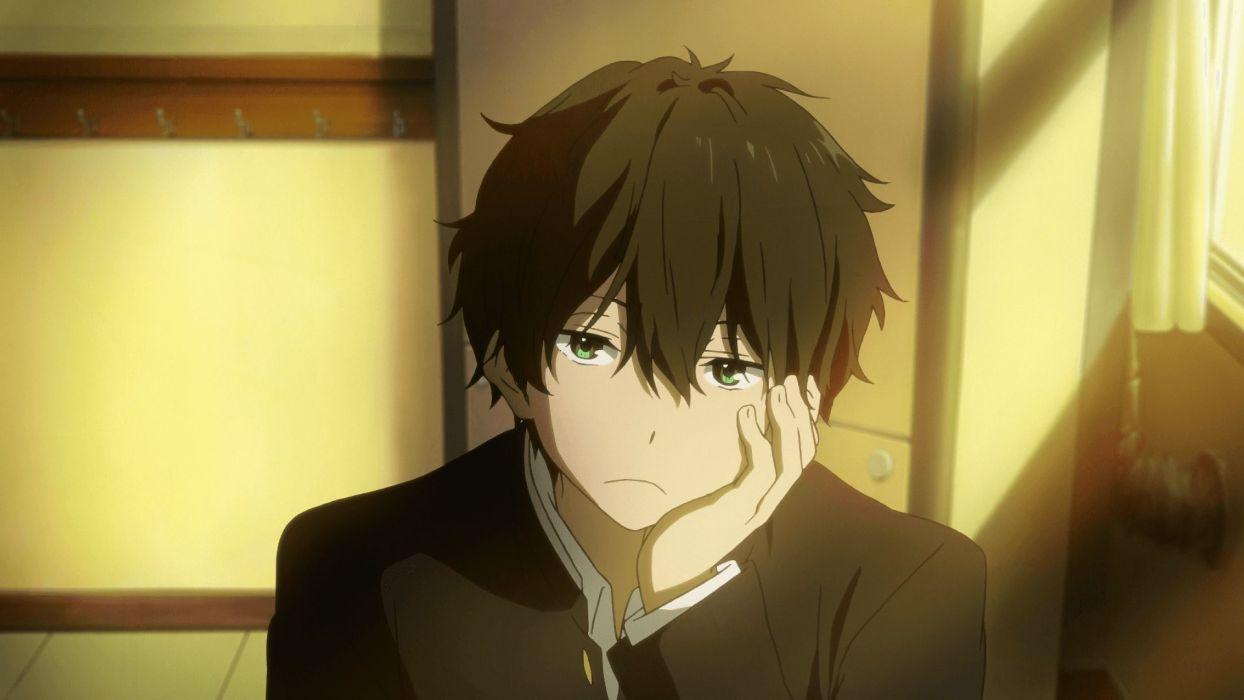 Hautraou is a self-centered teenager who has no care about anything in this world and always has a blank expression on his face.

He says that If he doesn’t have to do it, he won’t, but if he has to do it, he will make it quick. From this, we can clearly understand his attitude towards life and high school in general. As his time in the series progresses, we could see Houtarou slowly starts changing. He starts to work harder after receiving praises, showing that he actually cares about the feedback he gets. Slowly, he becomes a completely new person with a more vibrant and outgoing personality.

The same person who prefers to be alone now starts to enjoy his time with his friends. A lot of the time, without even being told, he takes the initiative all by himself to unravel a certain mystery. His change makes all of his friends happy, and he is very happy about what he’s been doing now.

Eru is the sweetest girl in the group and is known for her beautiful purple eyes and her catchy smile. She is always calm and cheerful, as well as pretty beautiful with long black hair. She comes from a wealthy family and is the only daughter of the family. 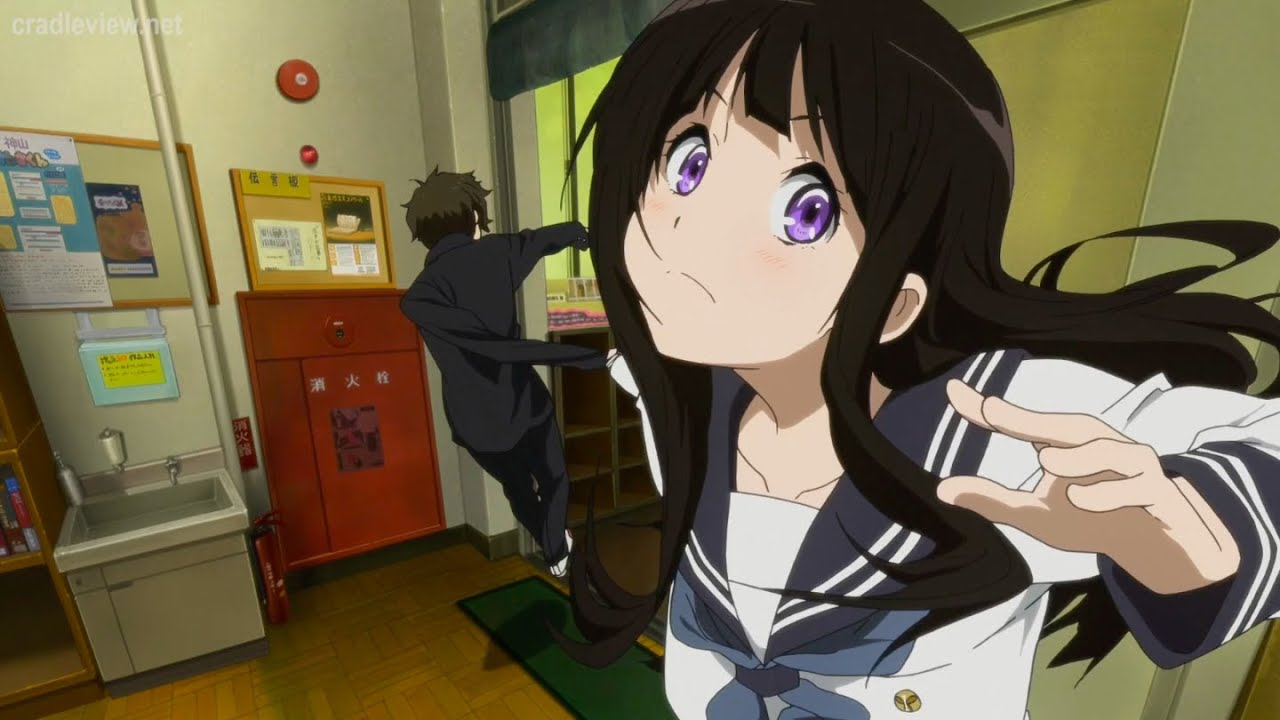 Eru is the sweetest girl in the group and is known for her beautiful purple eyes and her catchy smile.

Even after being rich, she remains a good person. She is also the president of the Classic’s Club. Unlike Hautraou, she didn’t join due to anyone’s pressure, but rather she joined due to her personal reasons. Everyone who knows her likes her. Even though she is not as intelligent as Hautraou, she has her constant curiosity about everything around her.

Satoshi has immense knowledge and is considered an important member of the club. He is also cheerful, jovial, and not all a lazy head. He is a very active student, as well as a member of the student’s council and handicraft club. Satoshi can be considered as the database of the club, thanks to his impeccable memory and knowledge about a lot of useful things.

Mayaka is a key member of the library and Manga society. She joined the group because she loves reading Manga. In her group, she treats the other members strictly. Mayaka is a straightforward person but sometimes makes fun of other people’s nicknames. Mayakadoesn’t prefer to keep things to herself.

So yeah, it’s time to find the answer for the Hyouka season 2 release date. But unfortunately, there is no official date announced for season 2, but there are rumors that suggest that the Hyouka season 2 release date is set to be announced in 2021 or 2022. Do note that we are saying this based upon the various rumors on the internet, and we will always suggest you take this with a pinch of salt. 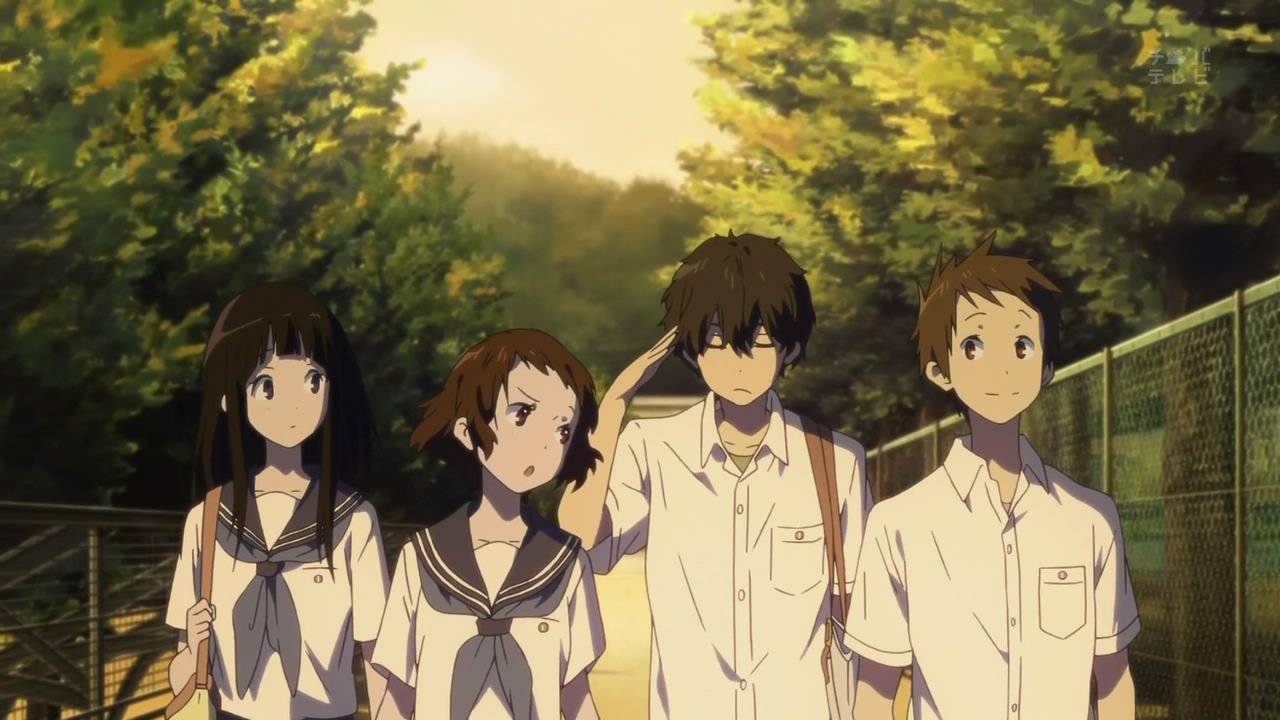 Unfortunately, there is no official date announced for season 2

But there is good news for the fans, Honobu, the writer of the novel Hyouka on which the anime series is based, has confirmed that he is indeed working on the 7th volume of the novel series. This means that there are chances that Hyouka anime is not canceled, and we may indeed see a season 2. But Honobu is known for writing very slowly. But even though he is very slow in that, he does the best. So the wait for the Hyouka season 2 release date may be actually worth it.

Where to watch Hyouka English Dub:

Those who haven’t watched the show or want to watch it again in English dub can head over to  Funimation, Crunchyroll, and Amazon Prime. It is pretty sure that whenever Season 2 arrives in English dub, we will be able to watch on these platforms.