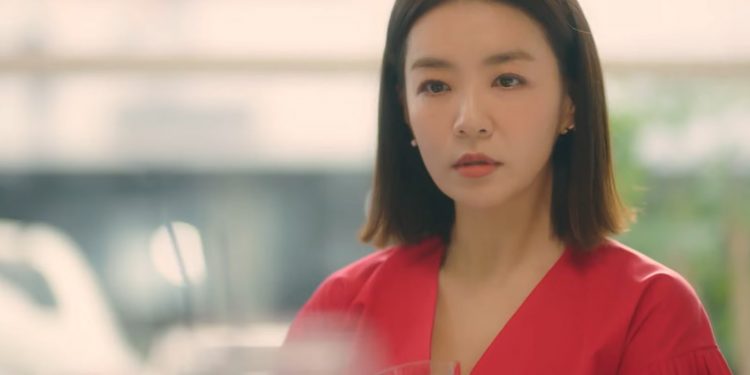 Hyeryung has a tower of lies she’s protecting, but it might just come crumbling down in episode 8 of Uncle. She has a lot of things she doesn’t want the Momvelies to know, the most important one being the condition of her daughter Chaeyoung. The previous episodes have let us know that Chaeyoung is not attending any elite boarding school as her mother brags to all the other mothers. She is actually secretly being kept confined and under watch, without any smartphones to connect with the outer world.

We also find out that Hyeryung’s husband is not looking after his ‘flourishing’ business in Dubai like she told everyone. She is actually divorced and living separately. Mingi seems to bear the brunt of all his mom’s secrets. Hyeryung advises him very clearly on not uttering a word about any of the issues at home to anyone outside. However, things do not go as planned, and when Chaeyoung’s ex-boyfriend turns up in front of Mingi, he accidentally spills the truth about Chaeyoung to him. This causes a chain of events that might be entirely unfavorable to Hyeryung. What will she do now? Everyone is curious to find out.

Previously on ‘Uncle’ Joonhee runs into Chaeyoung at the hospital

When Joonhee is at the hospital for alcoholism therapy, she runs into a girl who is crying in the bathroom. She offers the girl her handkerchief and leaves. However, she runs into the girl again on another day. Joonhee is not aware that the young girl is Hyeryung’s daughter, Chaeyoung. They share a conversation where Chaeyoung tells Joonhee that she was crying because her boyfriend dumped her and she had to get an abortion. While Joonhee is leaving the hospital, Hyeryung catches sight of her. She quickly hides but later looks into what she was doing there. After finding out Joonhee is an alcoholic getting therapy, she publicly mentions it at an event to ridicule her.

Jihoo had been doing a good job of ignoring Mingi so far. However, when he says something about Jihoo’s mother being a gold digger trying to secure a spot in the residency by hitting on Noeul’s father, Jihoo loses his calm. He hits Mingi, and the mothers have to pull them apart. He refuses to tell anyone what Mingi said that started the fight.

What disappoints Joonhee more than her son getting into a physical fight is his stubborn behavior. Jihoo refuses to apologize to Mingi. He doesn’t want to share what happened, and Joonhee gets frustrated with his behavior. She asks him if he wants to transfer again, and he asks why they can’t if they already have once. Joonhee is in tears as she tells her son she doesn’t have any money to do so and that he is no better than his father or grandmother for hitting someone, regardless of what they said.

A strange alliance is formed

As strange as it is, we sure do love it! All the viewers of the drama have commented on how they are enjoying Sodam’s mother taking sides with Joonhyuk. She secretly helps him out and shares important information, showing that as superficial as she may seem when it comes to the Momvelies, she has a warm spot somewhere in her heart.

Uncle Episode 8 will be released on January 2, 2022. Jihoo’s fight with his mom ends up resolving well when Noeul’s father shares the clip Noeul shows him of the fight. Jihoo buys his mother a handbag with his piggy bank money to apologize to Joonhee, and she is very touched.

Where to Watch ‘Uncle’ Episode 8?

Uncle is available to stream on Viki. It has a total of 16 episodes. The next episodes will mark the halfway point in the drama. Are you curious to see what happens next to Jihoo, his mother, and uncle? So are we!

What to Expect in Upcoming Episodes?

The next episodes of ‘Uncle’ will show us what happens to Joohyuk, who is lying unconscious in the hospital. They will also show Hyeryung struggling to keep a cover on her familial secrets and how Chaeyoung will react now that she knows his mother lied to her about her boyfriend.