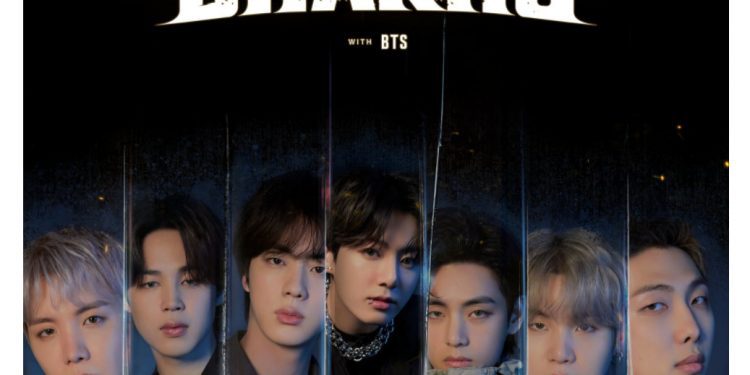 It’s no doubt that HYBE is a strong competitor to The Big Three in the world of K-pop. Having some biggest k-pop boy groups i.e. BTS, TXT, and ENHYPEN, ruling over the hearts of millions of k-pop fans. It’s not really a joke anymore. As the fandoms are a whole other world in themselves, the fans love to make fan arts and write fiction stories imagining their favorite idol groups and artists. Looking at the hype surrounding the webtoons and looking at the fans reading fanfictions, HYBE decided to release original webtoons featuring the world’s favorite BTS, TXT, and ENHYPEN.

On November 4, HYBE went on to reveal its plans to create original webtoons, web novels, and animations in collaboration with the HYBE artists. Naming the collection’ Original Stories’, it will have webtoons and web novels. The content will be based on the unique story IPs developed by HYBE. As updated by HYBE, ‘Original Stories’ will have three releases for the start. Them being “DARK MOON” with ENHYPEN, “THE STAR SEEKERS” with TXT, and “7FATES: CHAKHO” with BTS. All set to release between January 15-17, the webtoons will be available to read on Naver Webtoon for the global audience. While the fourth story, ‘Crimson Heart’ is still in progress, and the updates would be based on how the first three releases do between the fans.

Here is everything you need to know about the upcoming webtoons!

Releasing on January 15, 2022, “7FATES: CHAKO” will be the first story of the collection’ Original Stories’. Set in a city from the near future, the story is inspired by Joseon Dynasty’s tiger-hunting officers called chakhogapsa. Presenting in its own way, “7FATES: CHAKO” will follow the story of seven boys. The boys have a connection with each other through their fates as they overcome hardships together and mature in the process. As they face the chaotic world together with their fates deeply connected with the tiger. The boys team up together to create a tiger hunting team called Chakho.

Jin will play Hwan, an ordinary archer who loses his family to a tiger. Jimin plays Haru, a rock that guarded the gate to the world of the tigers and becomes human. RM plays Do Geon, a crime expert who has lived a difficult life. Suga plays Cein, who has a tragic past as he was almost eaten by a tiger. J-Hope plays Hosu, who was once kidnapped by a tiger. V plays Jooan, who falls in love with a tiger. Jungkook plays Zeha, a half-human and half-tiger character.

Next in the collection is “DARK MOON: THE BLOOD ALTAR” releasing on January 16, 2022. Set in various backgrounds, from an ancient magical kingdom to a modern-day private school. The story follows seven vampires whose memories have been sealed away. But something might change as a special girl appears in front of them. The teaser of the upcoming webtoon shows ENHYPEN in high school uniform, and the fans have been going gaga over the pictures. The story is rumored to have a teenage romance too. ‘DARK MOON’ will be divided into several series, with The Blood Altar being the first part of the series.

“THE STAR SEEKERS” with TXT

Last but not the least, ‘The Star Seekers’ will release on January 17, 2022. The webtoon will follow the story of five magical K-pop idol boys. They live in a world where magic and reality coexist. As the realization hits them about their magical powers, the boys decide to save the world from its downfall. From imaginary creatures to supernatural elements and magical performances, there are going to be a lot more things in the story. The fans already have the access to the preview of the webtoon through the animation “The Doom’s Night”. Along with the pop-up book “The Tale of the Magic Island”. And fans have been very excited for the whole novel to release.