Thyme has begun to fall for Gorya after the epic kick scene. However, Ren and Gorya's closeness is getting on his nerve. How will Thyme's jealously subside? With the iconic accident kiss? Or accepting his feelings? 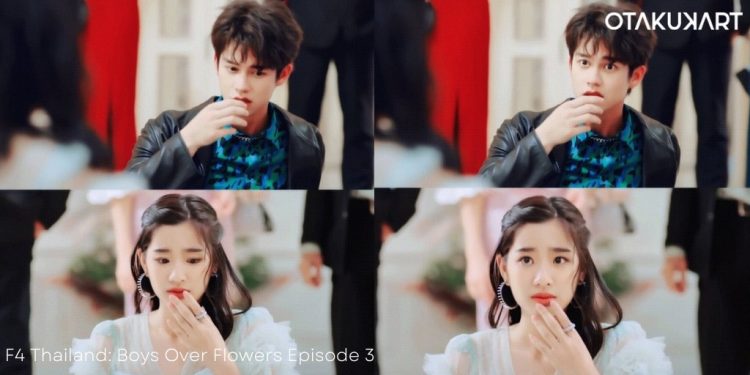 F4 Thailand: Boys Over Flowers Episode 3 is delayed, and thus, fans will have to wait more than a week to witness Thyme wooing Gorya! Finally, the iconic accident kiss scene between the F4 leader and Gorya has happened. However, Thyme’s reaction after the kiss has made everyone roll on the floor. How can he be adorable at such a moment? Also, the second lead syndrome has taken place with Ren’s charming nature. But his heart seems to hold a sweet spot only for his childhood love. Will Gorya ever be able to change it?

The latest episode gives a rollercoaster ride with every emotion all over the place. The episode starts will hilarious due bantering continues after Thyme kidnaps Gorya. Whereas Thyme and Gorya get on each other’s nerves, Ren begins to take over Gorya’s heart with his enchanting personality and gentle act. Meanwhile, the sweet friendship between Hana and Gorya leads to another trouble making Hana the new target of F4’s cruel game of the red card. However, when Gorya stands up for Hana, Thyme orders the hopeless Gorya to do things beyond one’s patience limit. But seeing Ren’s helping her out, Thyme seems to boil in jealousy! Is it the beginning of his love story or the beginning of Gorya’s nightmare? Therefore, F4 Thailand: Boys Over Flowers Episode 3 will uncover a love triangle of this romantic tale!

Ep 2 of F4 Thailand: Boys Over Flowers begins with Gorya’s kicking video going viral. Thus to save his face, Thyme kidnaps her and asks her to record an apology video in exchange for money. However, Gorya being Gorya, once again, kicks out his offer leading to the hilarious cat-mouse chasing game in Thyme’s mansion, which his mother also witness. Moving on, the knot between Gorya and Hana’s friendship unties with Hana apologizing and the two precious friends reconciling. Meanwhile, Gorya tastes the forbidden sweetness of first love as she gets close to Ren, making Thyme boil in jealousy.

To subside his anger, Thyme makes Hana the next target of bullying by sticking the red card in her lockers. Although Goray stands up for her friend, Thyme’s power is undeniable. Thankfully, Ren saves the two hopeless girls, making Gorya the center of envy. To give her a lesson, F4’s admirers fake act friendly and invite Gorya to Mira’s party. Although the clueless Gorya attends it, she becomes their prey after witnessing Ren’s loving eyes on Mira. However, Mira helps her, turning her into a new princess and encouraging her to stand up against the infamous F4.

By the ending, everyone is shocked, noticing Gorya’s make-over. However, seeing Ren taking Gorya’s hand, Thyme lashes on him for taking her side, and the two end up fighting. When Gorya tries to stop them, accidentally she lands on Thyme, crashing their lips! Another incident surprises everyone, knowing it’s Thyme’s first kiss, who shyly blames her for stealing his kiss before running from there. Thus, F4 Thailand: Boys Over Flowers Episode 3 will be the start of Thyme’s love story!

Thyme And Ren Chase After Their Beloved

The preview of F4 Thailand: Boys Over Flowers Episode 3 is already out! It seems Gorya has caught on to Ren’s unrequited love for Mira. Meanwhile, Thyme also discovers Ren and Gorya’s intimacy and understands what she wants. Therefore, he starts wooing her with his weird adorable antics, such as traveling with Gorya on a bus, something he has never done before. Of course, it makes Goray perplexed, and before she can think more, Thyme gets another kicked! But this time, it is not from Gorya but his sister, Tia! Another memorable character we never forget from the Boys Over Flowers version, the lead star’s sister!

Another twist is waiting for viewers in the next episode with the airport scene where Ren decides to fly to France to chase after her love, Mira. With Ren’s absence, Gorya will begin to see the spoiled Thyme’s new sides. Finally, the story is moving to its main romantic part! Therefore, fans should get ready to witness how this epic love story unfolds in F4 Thailand: Boys Over Flowers Episode 3!

Domestic viewers can watch the series on the GMM25 channel at 8.30 pm ICT. It will simultaneously be streaming on GMM25’s official YouTube channel. On the same day, the episode will be out at 8.30 am in the USA, 1.30 pm in the UK, 7 pm in India, 9.30 pm in the Philippines. On 9 January 2022, the episode will drop at 12.30 am in Australia. The series F4 Thailand is also available on ViuTV with English Subtitles. But keep note that Viu streaming is accessible only in a few selected countries.