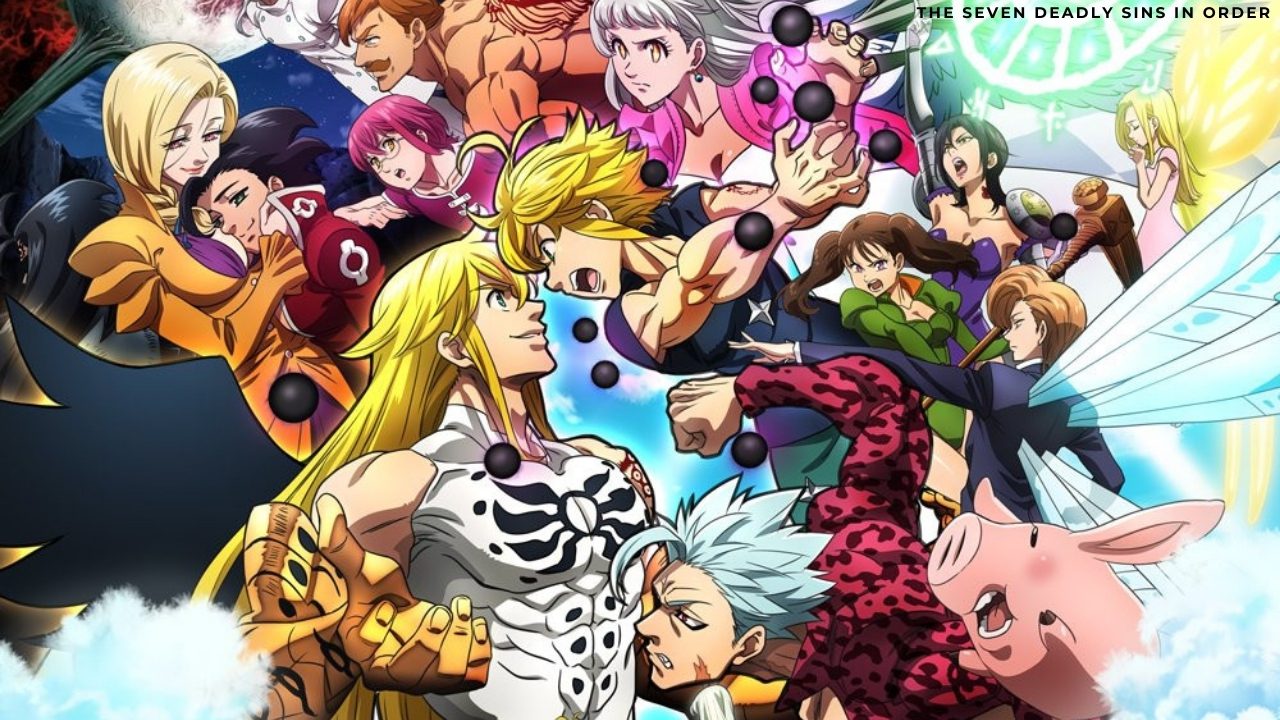 How To Watch The Seven Deadly Sins Anime In Order? Nakaba Suzuki’s manga series The Seven Deadly Sins is a Japanese fantasy manga story. It is written and illustrated by Nakaba. This comic is placed in a European Middle Ages-style environment, with the seven knights portraying the seven deadly sins. The Seven Deadly Sins manga has been licensed for English translation in North America through Kodansha USA, with Crunchyroll releasing the volumes online in over 170 countries as they are released in Japan.

Between October 2014 to June 2018, A-1 Pictures developed an anime tv show based on the comic. The Seven Deadly Sins was turned into an anime tv show in April 2014, as per the 20th edition of Weekly Shōnen Magazine. From October 5, 2014, through March 29, 2015, it was broadcasted over MBS, TBS, as well as other JNN stations. It aired for two seasons. Then Studio Deen took over for the third season, which aired from October 2019 to March 2020, followed by the fourth season in January 2021.

The Seven Deadly Sins was ranked the fifth-best manga series for male viewers. This was from the 2014 edition of Kono Manga ga Sugoi!, a poll of individuals within the manga and publications business. Then at the 39th Kodansha Manga Awards, the Seven Deadly Sins was named Best Shōnen Manga. At the 42nd Angoulême International Comics Festival in France, it was also shortlisted for the 2014 Manga Taishō prize and also for Best Youth Comic.

The anime The Seven Deadly Sins was the fourth most binge-watched show on Netflix. Within the first 24 hours of its debut in October 2017.

The Seven Deadly Sins was the 30th best-selling anime of the first half of 2015, with 32,762 units sold of the five volumes released at the time. With 61,939 copies sold in the first half of 2015, the manga, The Seven Deadly Sins -Gaiden- Sekijitsu no to Nanatsu no Negai, was indeed the 33rd best-selling short novel. So if you’re planning on watching this amazing anime, you would need the correct order in which you should watch it. Let’s dive right into it.

How To Watch The Seven Deadly Sins In Order?

The OVA consists of only two episodes. This anime, despite being an OVA, is quite instructive in terms of filling the gaps in the primary season plot. After watching the first season, you should definitely check this out.

4. The Seven Deadly Sins: Revival of the Commandments

The Seven Deadly Sins: Revival of the Commandments is season 2 in the series. It has 24 episodes. It launched on January 13, 2018, after being revealed during the “Nanatsu no Taizai FES” ceremony in July 2017. The last episode aired on June 30, 2018.

5. The Seven Deadly Sins the Movie: Prisoners of the Sky

This was the first Movie in The Seven Deadly Sins series. On August 18, 2018, the film was released in Japan, and then on December 31, 2018, Netflix streamed it internationally. Its running time is 99 minutes and was produced by A-1 Pictures.

This is the 3rd OVA which is also important for the main storyline. It was released on November 16, 2018. It is 23 minutes long and is usually paired with season 2 of the series. However, according to the storyline, it is supposed to be watched after the movie.

7. The Seven Deadly Sins: Wrath of the Gods

The Seven Deadly Sins: Cursed by Light was released in Japan on July 2, 2021. It will be broadcasted on Netflix on October 1, 2021.

Where are Prince Harry And Meghan Markle Now?

Kj Smith Boyfriend: Who is the Actress Dating in 2021?