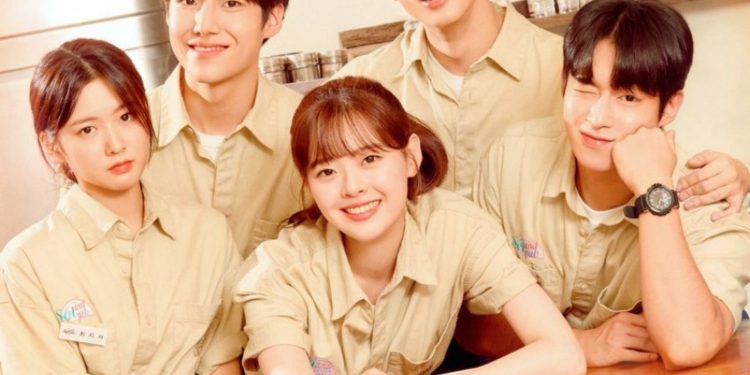 ‘Part-Time Mello’ is a romantic web drama collaboratively being aired by Why Not (KOK) and Seezn. Hence, it has a different streaming availability from other dramas. It first aired on November 17, 2021. The series consists of 12 episodes and stars idol actors like Dawon and Eunsang. KOK has a reputation for its web dramas. It is one of the channels on YouTube which has a lot of local and international following for their romance drama content. When ‘Part-Time Mello’ teasers were released, many fans were excited and had high expectations knowing where it would be aired. We’ll be telling you everything you need to know about how and where to watch Part-Time Mello online in this piece, so stick with us to the end!

Part-Time Mello is a drama that tells the story of Boo Seul-Mi (Han Soo-Ah) getting used to a part-time job at a pub called ‘Sol & Pub’. It takes us through the roller coaster of emotions she feels after not passing the civil servant exam multiple times. Seul-Mi has a different relationship with all her co-workers, which makes this drama a fun watch. The first look at Part-Time Mellow was released in early November. It showed the main characters in their workplace get up and stirred excitement amongst the fans.

Where to Watch ‘Part-Time Mello’?

There is a lot of confusion regarding where to watch Part-Time Mello online as it is a collaboration project, but we’re here to help you figure it out. Part-Time Mello’s episodes 1 to 6 are available to stream on KOK. Episodes 6-12 require you to download the Seezn app. The app, however, is not available in all countries. If you can access it, you will have to pay to watch the episodes. KOK has said they are looking into making the rest of the episodes internationally accessible at a later date.

‘Part-Time Mello’: Who Does The Cast Consist Of?

One of the reasons Part-Time Mello received much attention before releasing was the cast. The cast consists of idol-actors like Dawon from SF9 and Lee Eunsang. Both have their fair share of fans who were looking forward to this drama immensely. The series also features Han Soo-Ah, Min Soo-Hwa and Ha Jong-Woo. Dawon got many compliments for his acting in the drama ‘Doom at Your Service’, which aired earlier this year, as the female lead’s brother. Fans are very happy with his acting in ‘Part-Time Mello’ as well.

Eunsang has won many hearts with his adorable character in the show. He received compliments as well for playing his role ultra naturally. Han Soo-Ah made a name for herself in the web drama world with her main role acting debut in Playlist Global’s ‘Growing Season’. It is no wonder that she plays her role perfectly in Part-Time Mello as well.

‘Part-Time Mello’ is a romantic drama that takes us through a big change in Seul-Mi’s life. One night when she is drinking her sorrows of failing an exam away, she bumps into a stranger who offers her words of comfort and fixes her broken slippers. Seul-Mi is very touched. However, her memories when she wakes up are all hazy. All Seul-Mi can remember vaguely is the name tag and workplace of the stranger who offered her warm words. Taking a chance, she applies to work at Sol & Pub, the place she remembers the stranger to be working at. This action of hers introduces her to many new co-workers and lets her have new experiences.

The drama is a fun watch with great chemistry between all the characters. Part-Time Mello is a good blend of comedy and romance and won’t leave you bored for a minute. One of the best aspects of the show is how even the supporting character’s storyline is interesting to follow.

Hawoon and Jiseo, played by Eunsang and Min Soo-Hwa, respectively are always a treat to watch. They have polar opposite personalities, and the friction between them only leads to endless cute moments. Make sure to check the drama out if you’re craving an entertaining rom-com watch!

Also Read: Seul-Mi is left with a Troubled Heart in Episode 7 of ‘Part-Time Mello’