Finally, Nam Young and Kang Ro Seo's love story moves forward. However, is there a way to witness how their love tale unfolds online? 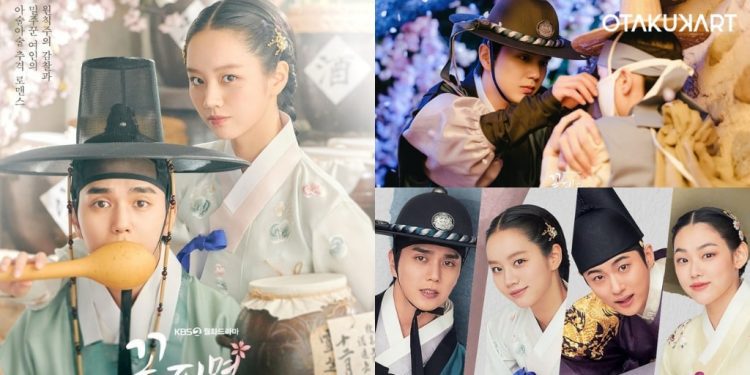 After its release, many viewers must want to know where to watch Moonshine kdrama, also known as When Flowers Bloom, I Think of the Moon. After all, who would miss it when the drama features the comical chemistry between Yoo Seung Ho and Lee Hye Ri? We all know Lee Hye Ri is already known as a comedy queen. But after pairing with her, Yoo Seung Ho is no different! With this chaotic duo, the historical rom-com becomes more enjoyable and mirthful!

The kdrama ‘Moonshine’ follows the tale of four people from the strictest liquor prohibition period of Joseon. It revolves around the inspector Nam Young who heads to Hanyang to gain fame and makes his family name in the big city. Meanwhile, Kang Ro Seo is a former aristocrat but impoverished woman working day and night to earn money so her brother can study without burden. Amid all those difficulties and chaos, the two cross paths, turning the wheels of fate as their destinies entangle! The problems come non-stop after the duo unexpectedly discovers a hidden stash of alcohol. What will they do with this stockpile of liquor when revealing this secret would only result in certain death?

What Happened In The Storyline So Far?

Finally, the historical comedy tale of Moonshine kdrama begins with Nam Young heading to Hanyang to take his state exam. However, a sudden encounter with Kang Ro Seo turns his whole life into chaos. Despite all difficulties, Nam Young passes the test and is appointed to the position of inspector. Meanwhile, crown prince Lee Pyo crosses paths with Kang Ro Seo and Nam Young. A little mishap between them turns Nam Young’s career into a disaster since Lee Pyo orders the head officer to make him resign within a month.

Meanwhile, Kang Ro Seo comes up with a new idea to earn money after learning her brother’s debt of 100 yangs. She begins selling alcohol with her close friend Cheon Geum, where she unexpectedly meets Lee Pyo once again. However, Nam Young is on her tail with the mission to capture five alcohol sellers of the town! Even after doing everything, Kang Ro Seo couldn’t hide her liquor selling mini-business from the hawk-like eyes of inspector Nam Young. Although he turns a blind eye to her crime, the rift begins between them with Lee Pyo’s provoking.

Not to forget, the second female lead, Han Yae Jin, already admires brave Kang Ro Seo and falls in love with Lee Pyo! Thus, watch Moonshine kdrama to know how this complicated web of tangled fates heads when danger lurks over them!

How To Watch Moonshine (2021) Kdrama Online?

‘Moonshine’ Kdrama, also known as ‘When Flowers Bloom, I Think of the Moon’ was premiered on 20 December 2021 at 9.30 pm KST on the KBS2 channel. The drama has taken the Monday-Tuesday time slot of the KBS2 network. Finally, the rom-com tale of an inspector and a liquor seller from the strictest alcohol prohibition era has begun bringing laughter and butterflies with Yoo Seung Ho and Lee Hye Ri’s comical romantic chemistry! Thus to witness their lovely on-screen chemistry, fans don’t have to worry because there are numerous ways to watch Moonshine drama online.

Since the kdrama is broadcasting on KBS2, it will also be available on Wavve. However, please note, Wavve is an online streaming platform accessible only in South Korea. Hence, South Korean viewers can watch all previous episodes and the upcoming ones on Wavve after buying the website’s subscription plan.

As for the international viewers, there are numerous options available. When Flowers Bloom, I Think of the Moon kdrama will be streaming on Ratuken Viki, which will update its episodes soon. Therefore, fans may have to wait for a while. Besides Rakuten Viki, Moonshine kdrama is also available on Kocowa. Kocowa is also an online streaming channel accessible only in South and North America. On the official YouTube channels of Kocowa and KBS Drama, you will find short clips of When Flowers Bloom, I Think of the Moon. Thus, choose a streaming option as per your choice and watch how the romantic story of Kang Ro Seo and Nam Young unfolds in Moonshine kdrama!