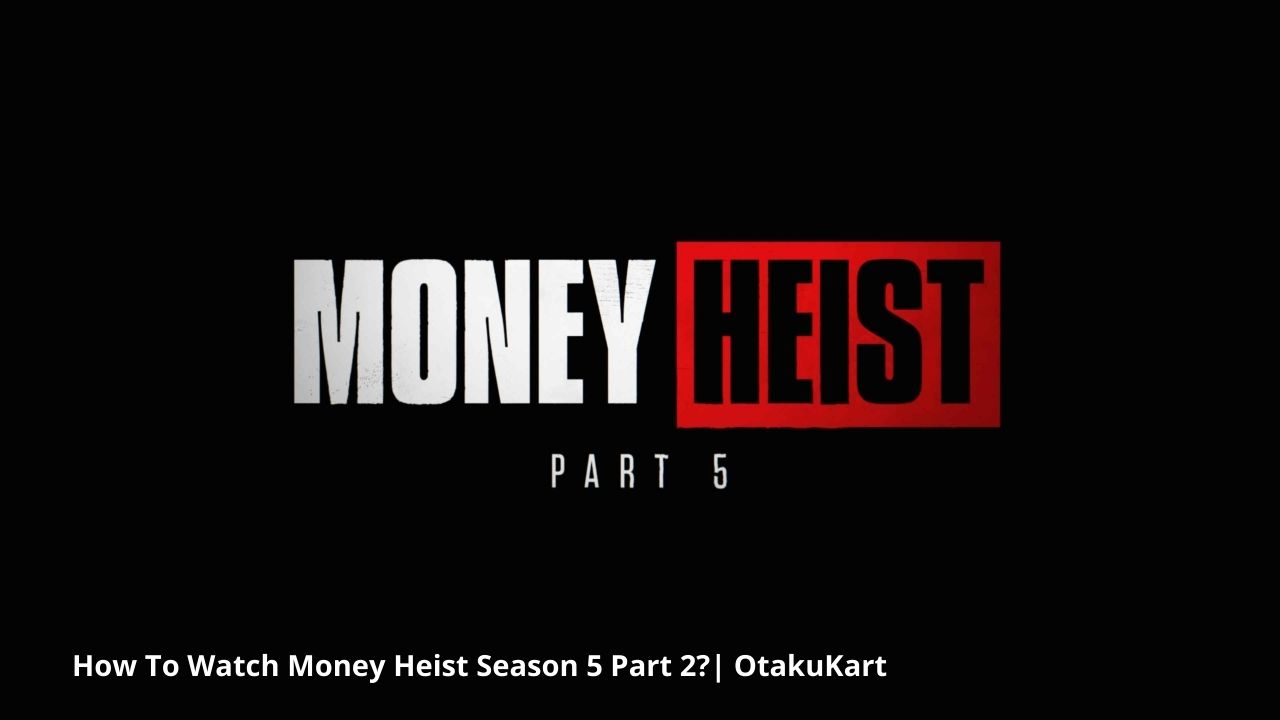 From The Official Trailer Of Money Heist Season 5 Part 2

Money Heist Season 5 Part 1 came to a heart-breaking end, leaving fans with a hint about where the show is headed. What we are about to see is probably the fall of Professor and his gang after always being ahead of the cops and government all this time. So, Money Heist Season 5 Part 2 is just around the corner, teasing us that Sagasta’s army, along with Tamayo finally taking over the Bank of Spain. At the same time, the Professor and the gang. So here we are breaking down the events of Part 1 and how you can watch Money Heist Season 5, Part 2, which will be released in a few hours to come.

The Bank Of Spain heist, unlike the Royal Mint, came with a lot of complications. Tamayo might have come off as a threat at first, but Professor got hold of him. It was Alicia Sierra who was no less than a mastermind in her own right. If she wasn’t enough, the gang had troubles with Gandhia, who was a soldier inside the Bank Of Spain and knew more about the Bank than the gang could ever. Towards the end of Money Heist Season 5 Part 1, we saw Alicia managing to track down Professor while he helped Lisbon get inside the Bank. Here is a look at what went down from there on.

Money Heist Season 5 Part 1 opened up to the exact moment Alicia Sierra had caught Professor in his own hideout. All in the hope to bring him to Tamayo and clear all the terrorist allegations on her. Meanwhile, Tamayo is on his way to bring the army into the picture to take down the Professor’s team at the Bank of Spain. For hours since Raquel joined the team at Bank Of Spain, they had no contact with the Professor. When they did, they learned that Alicia Sierra had him in her clutches, and Professor had no backup plan for this.

Alicia’s move stunned the team, and they decided its time to surrender. So they went out with a white flag to negotiate with Tamayo. Lisbon figured out that Tamayo doesn’t have Professor. It’s probably Alicia all alone. Therefore, instead of surrendering, they negotiated to give up Gandhia only. As they are in the process of the same, Arturo tries to be a hero and manages to steal the guns of the gang and lead the other hostages into doing so too. They manage to lock themselves in the room where the gang originally kept their weapons. Now Arturo plans to use them all on the gang to knock them down. 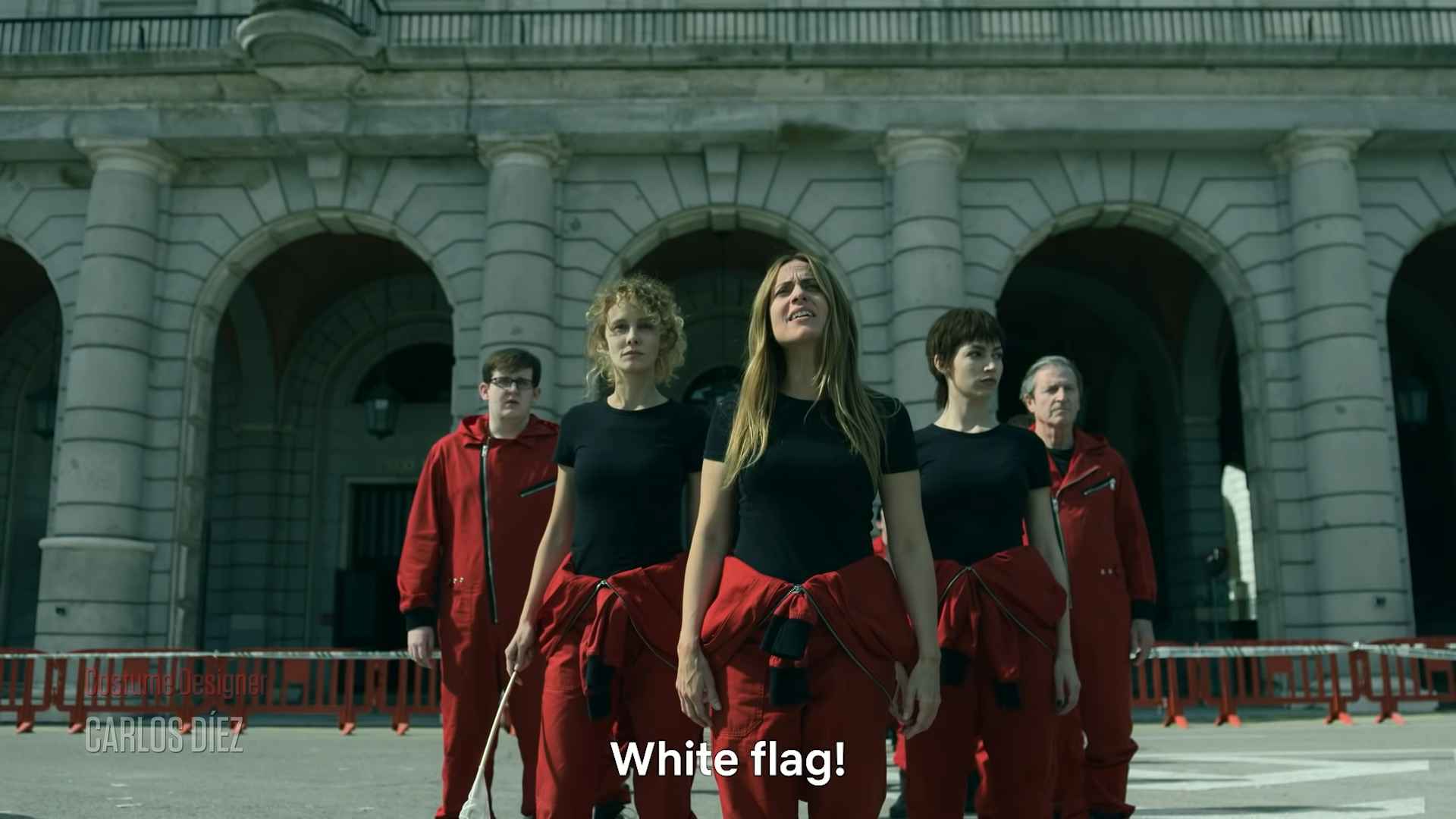 From The Money Heist Season 5 Part 1 Featuring Tokyo, Lisbon and Monica and Hostages

To make sure Gandhia doesn’t let a word about hostages retaliating, the gang sends him with a smoke grenade on. Thus, to let him pass out while they take care of the situation. The war between the gang and hostages ends with Monica shooting Arturo down as he mocked her baby and her marriage with Denver. A rule they weren’t supposed to break was to shoot down a hostage. Their lives are important. The only way to save Arturo was to send him to the hospital. With a number of hostages, the team sent him away. Tamayo decided to use Arturo dying as leverage to send General Sagasta’s army into action. Meanwhile, Alicia had also captured Marseille and Benjamin as they came back to Professor’s hideout.

General Sagasta’s wild army joined by Gandhia was about to break in. Not through doors but from the top of the building. The gang noticed the same and started making moves. Meanwhile, back at Professor’s hideout, Alicia’s water broke, and she had to take Professor’s help in delivering the baby. Helsinki becomes the first target of the Sagasta’s army attacking. By that time, Professor took over the call to contact his gang and devise a plan to save Helsinki.

So, while Tokyo, Manilla, and Denver distracted the snipers with some hostages on the rooftop, the gang tried to rescue Helsinki, whose foot was stuck under a fallen structure. The main motive of this plan was to use the same way Sagasta’s team came inside the Bank. Tokyo, Manilla, and Denver will use that route to surround the Sagasta’s gang from the back while the rest of the team is on the front. 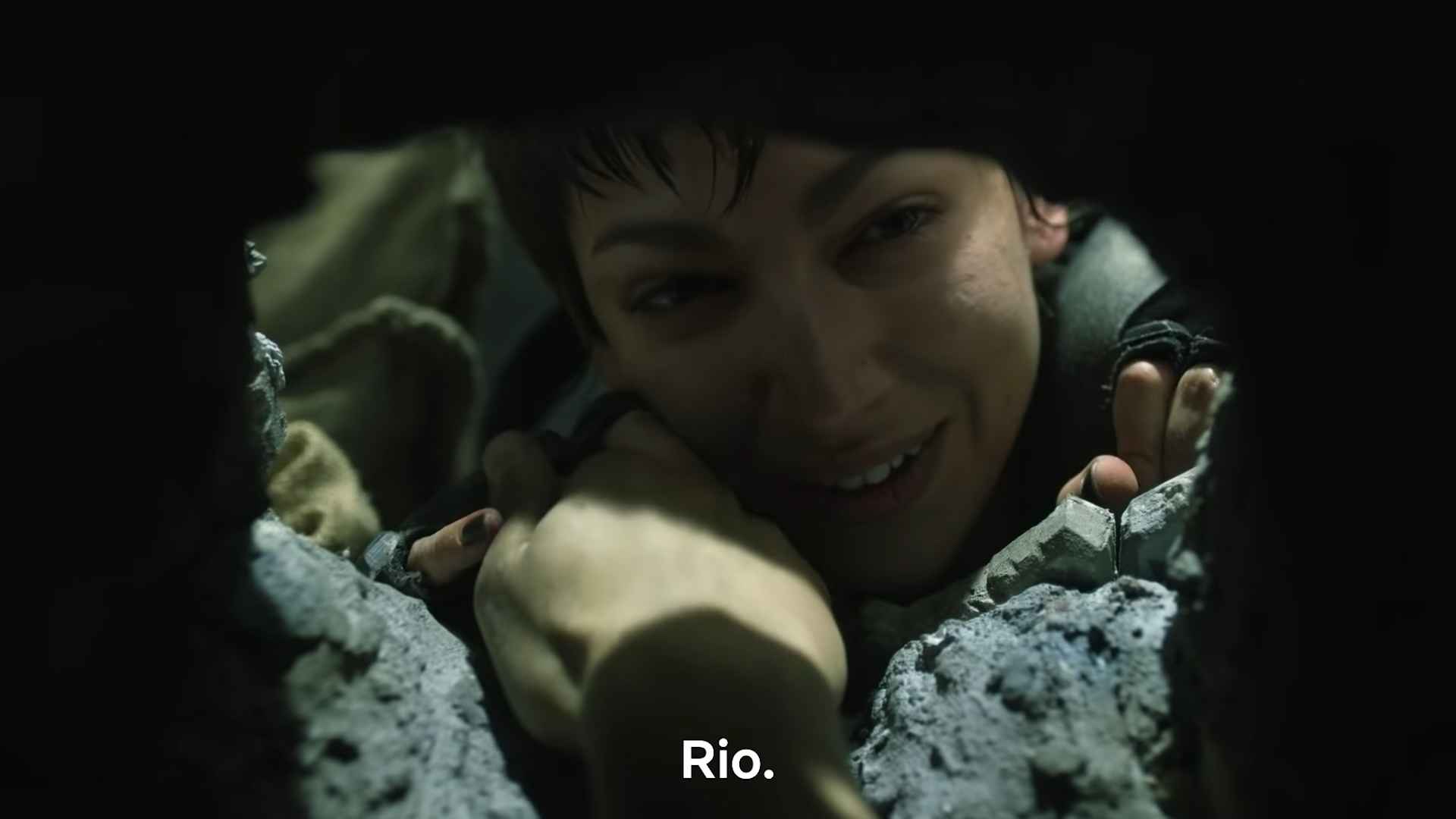 Tamayo had plans to send Suarez’s team as well, but Professor made a call and threatened to reveal all his secrets. Sagasta’s team was on its own. Unlike Tamayo, Sagasta’s team came with backup. With the help of Gandhia, they got access to an old locking system of the Bank to get themselves inside a safe room. Sagasta’s team started having an advantage over the gang, and it was high time the gang should consider some complications.

Alicia Sierra announces her baby’s name to the team, which is Victoria. It seemed like she joined them, but we also saw her plotting plans of her own. Coming back to the tense situation inside the Bank, Tokyo was shot while Sagasta’s group was closing in. The Professor suggested using a shaft near them while Rio was digging a hole over the ceiling on his own.

By the end, Tokyo saw the need to make desperate decisions. She asked Manilla and Denver to escape and lay pillows for her as she couldn’t use the rope in this situation. Despite not wanting, Denver and Manilla had to take that chance. Tokyo couldn’t make it as Sagasta’s team came firing on her. She took down some of them while she went down herself. Gandhia came to take a closer look at her before pulling a gun on her. She smiled while she had already opened a number of grenades tied to her body. A blast that probably took Gandhia and some of Sagasta’s army.

Apart from all of this, the flashback sequences in the show tell us the story of Berlin training his son Rafael, a cyber-hacking mastermind. He takes him on a heist of their own to teach him some lessons about working these things out. We also take a look at the history of Manilla, Denver, and Moscow. Lastly, Tokyo’s love life, her heist that saw her boyfriend die, and how she was the first recruit into Professor’s plan for the heist of Royal Mint.

From the official trailer of Money Heist Season 5 Part 2, we can see that it’s high time Professor comes forward to the world. For the very first time, the world will see the mastermind behind the two heists that managed to fool the cops and government surrender. This time around, the cards were stacked against Professor as many complications came ahead. Is this all for losing his first recruit Tokyo or is this part of another plan? 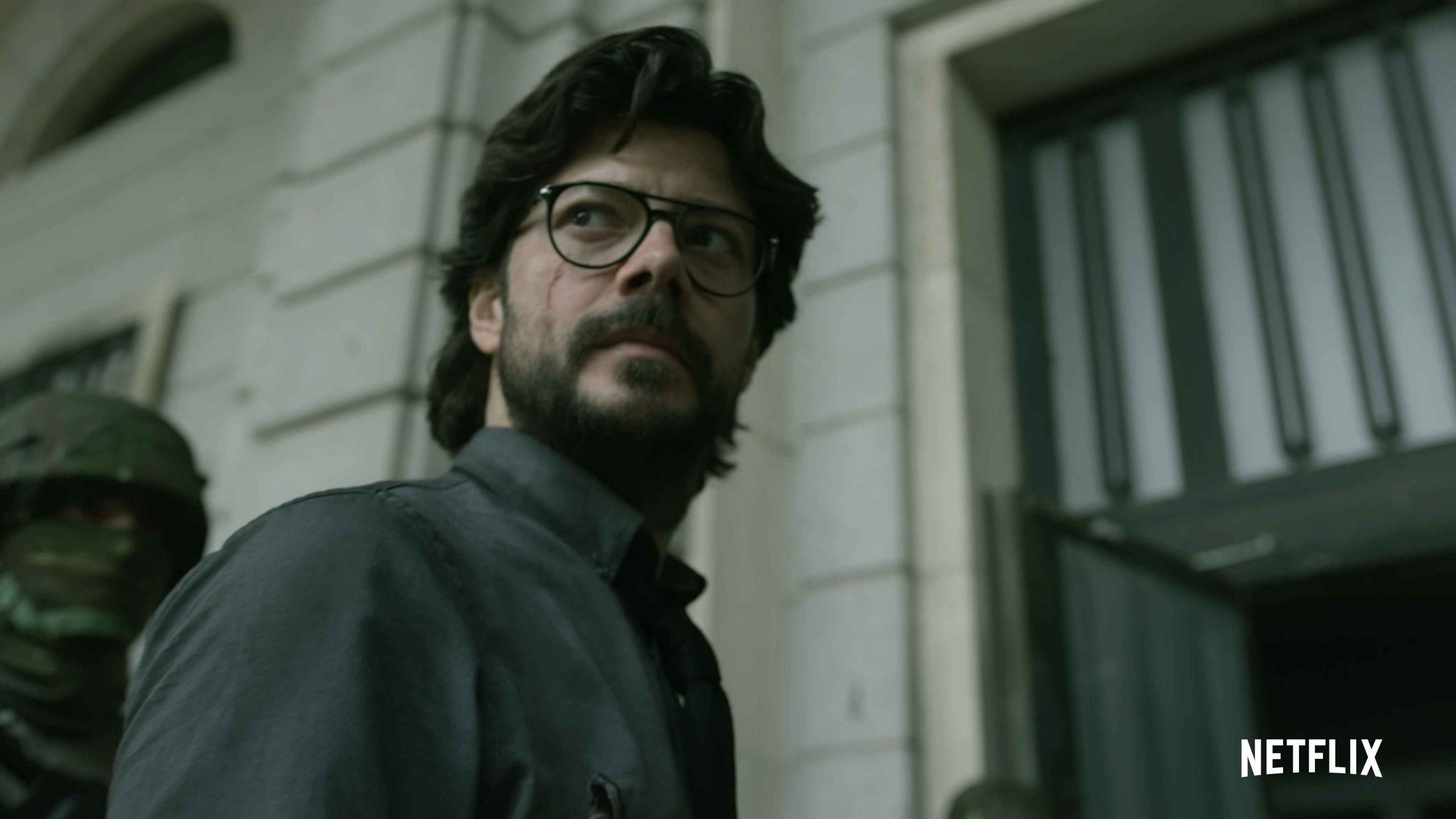 We also saw the team mourning for Tokyo, who gave a hell of a fight to Sagasta’s wild team. They went all out, and Tokyo had backups of her own. She died using them to kill Gandhia, at least. We can see Sagasta still alive with some of his crew. They came inside to put an end to this heist and are planning to continue their mission until every member of the gang is down.

The gang promised each other to get out; they were confronted by Sagasta’s army members one by one. Towards the end of the trailer, we saw all of them surrounded and captured by Sagasta’s army. Is this how the biggest heist in the world will come to an end? Check out the official trailer, list of the episodes, and how to watch Money Heist Season 5 Part 2 below.

List Of Episodes and their titles releasing for Money Heist Season 5 Part 2:

The Official Trailer For The Money Heist Season 5 Part 2: 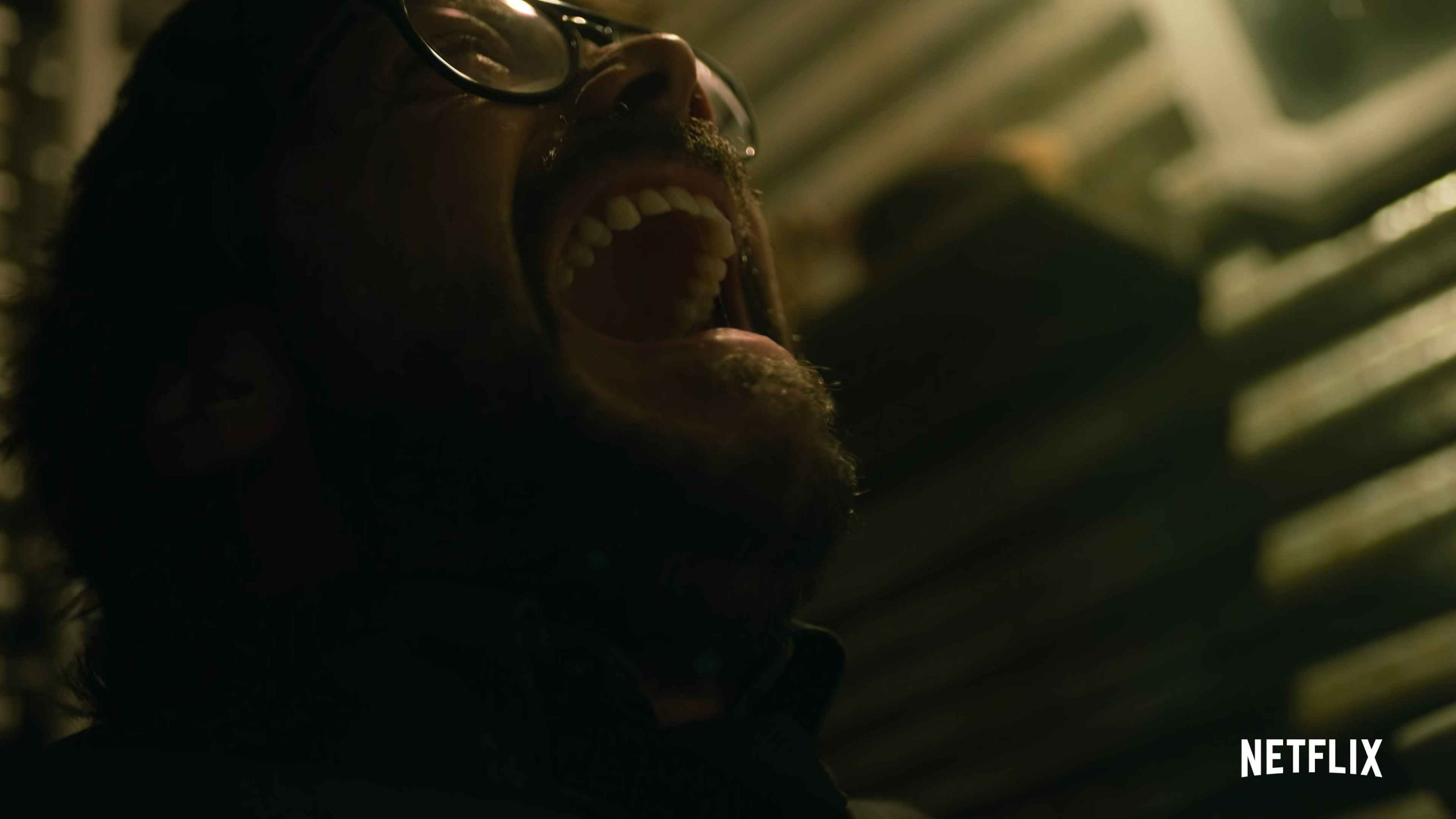 From The Official Trailer Of Money Heist Season 5 Part, 2 Featuring The Professor