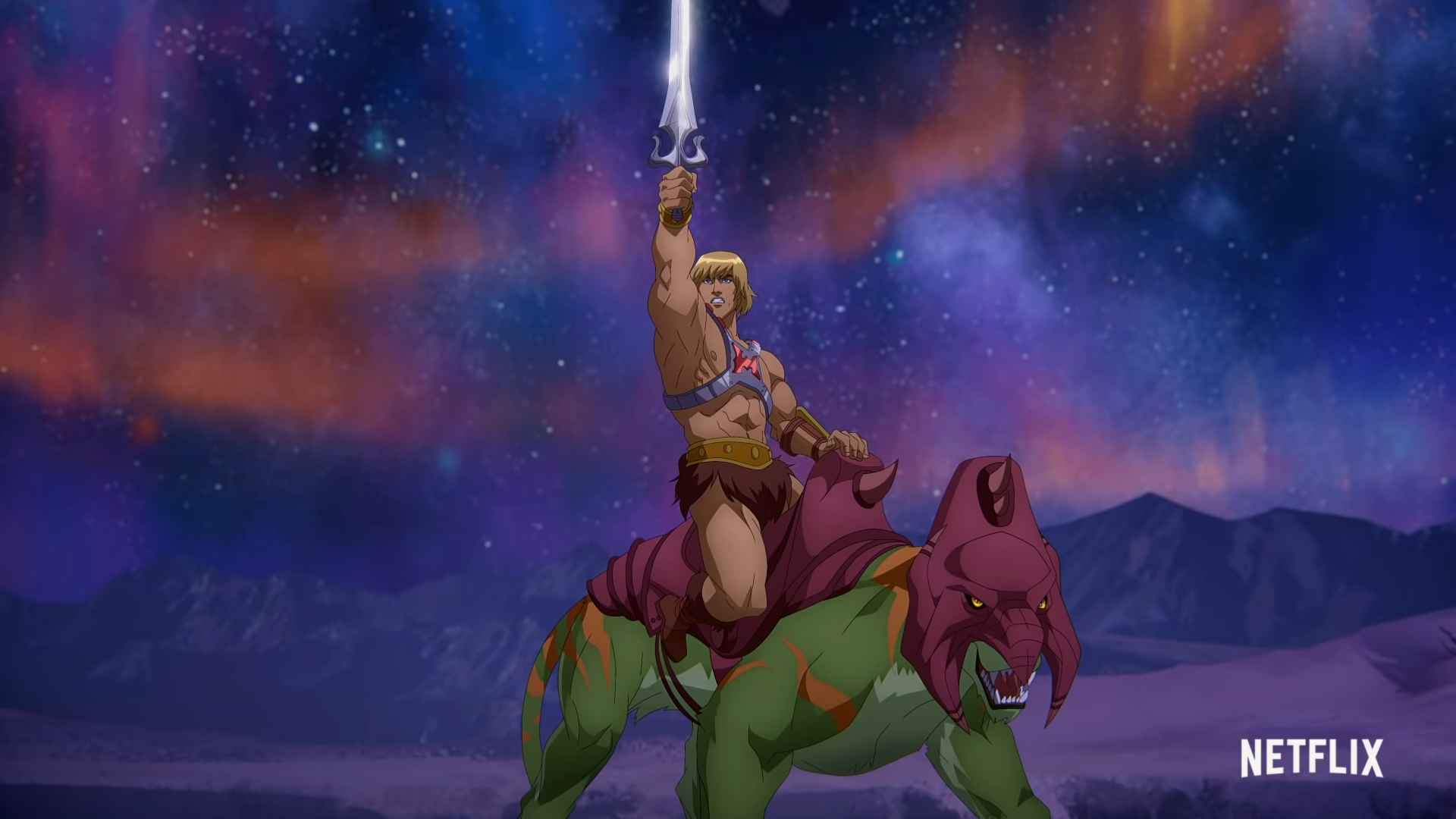 Masters of the Universe: Revelation has returned with a second part. The first one that came back in July brought the childhood back of many viewers. The story that was left off back in the 80s picked up to continue where it is due. The only difference this time around was that things got quite dark as Skeletor found out the exact thing he should be chasing. Although he wasn’t successful in doing so, he managed to kill the entire magic of Eternia. By the end of Part 1, it was not Prince Adam/He-Man lifting the Sword Of Power; it was Skeletor. So the future isn’t exactly right for Masters of the Universe: Revelation: Part 2 but here it has come, and here we are looking at what it is about and how you can watch it.

For starters, part 1 was more like a Teela-centered arc. He-Man gave his life trying to protect the secrets of Grayskull and the magic that maintains the universe. But despite his strongest efforts, he couldn’t do so, and his death went to waste. Eternia lost magic and hardly survived for years. Things took a different turn when Sorceress Of Grayskull and Evil Lynn figured out how to bring it back. This saw the old team coming back with some new members enlisting themselves to help. But with the journey ahead, there was more than just one complication. Here is a complete recap from start to finish for Masters of the Universe: Revelation Part 1.

Masters of the Universe: Revelation: Part 1 picked up the storyline of the original He-Man and The Masters of The Universe. It continued to tell us the story of Planet Eternia. A planet where Prince Adam continued to defend the secrets of Castle Grayskull. He picks up the Sword Of Power and transforms into his alter-ego, He-Man. Only a few people knew about his secret identity to this day. All of this is to protect Castle Grayskull from the wrath of Skeletor and his army. Skeletor always dreamed of taking over Castle Grayskull and ruling the universe with the power the place holds.

Much like all the times he tried, Masters Of The Universe: Revelation saw Skeletor embarking on another expedition against Prince Adam’s army. This time around, though, his plans were different. He entered the castle to capture a magic orb that is the source of all the magic on Eternia and the universe. Cracking the same Orb resulted in the release of the powerful magic. The only way to save the universe was He-Man’s Sword of Power that could absorb this energy release. 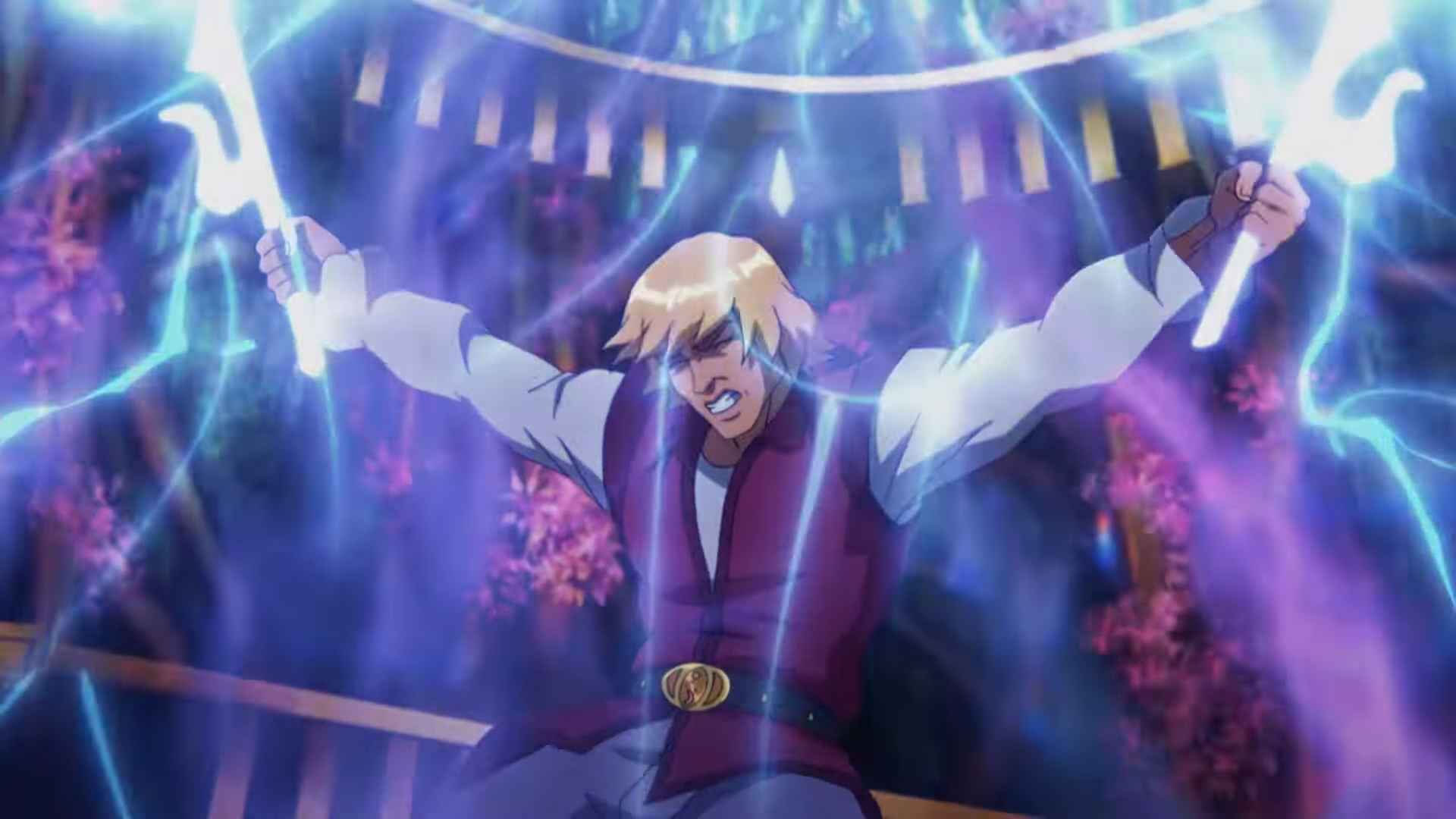 From Masters of the Universe: Revelation Part 1 Featuring Prince Adam

He-Man decided to give his all but, in the process, lost a lot of energy. He turned back to Prince Adam to everyone’s shock. Especially Teela, who didn’t know this all along. Soon, Prince Adam couldn’t take the energy and died defending the castle. Years into the future, the magic of Eternia was lost. The Sorceress Of Grayskull and Evil Lynn worked together to bring back Eternia’s magic. The only way was to forge the Sword Of Power again.

The Sword Of Power is split into two pieces, with one in Preternia, which is heaven, and the other in Subternia, which is hell. This saw Sorceress Of Grayskall calling back the old team for the mission. A heartbroken Teela who left the castle and has been up to various jobs with her new friend Andra initially doubted the decision of joining hands with Evil Lynn. But she eventually agreed to save Eternia.

Masters of the Universe: Revelation Part 1 saw Teela enlisting the help of her father, Man-At-Arms. The only person who has the skills of forging a weapon like Sword Of Power. But he believed his days of fighting were over. Roboto, who is more of a copy of Man-At-Arms, instead joined the team in order to help them to forge the sword. The team faced challenges throughout Subternia and Preternia. From fighting a Skeletor entity to fighting an Evil He-Man.

All this along, Evil Lynn, on one side, seemed like had a change of heart but was also acting weird. It seemed like she had an agenda of her own. The journey also saw the team losing friends such as Orko. He was already dying with the lack of magic in Eternia. So, while escaping Subternia, he gave his all so that his friends could have a safe escape. Roboto sacrificed his life while forging the Sword Of Power in Preternia. The sword holds the power of Eternia and an entire universe. So forging the same was definitely not an easy job. 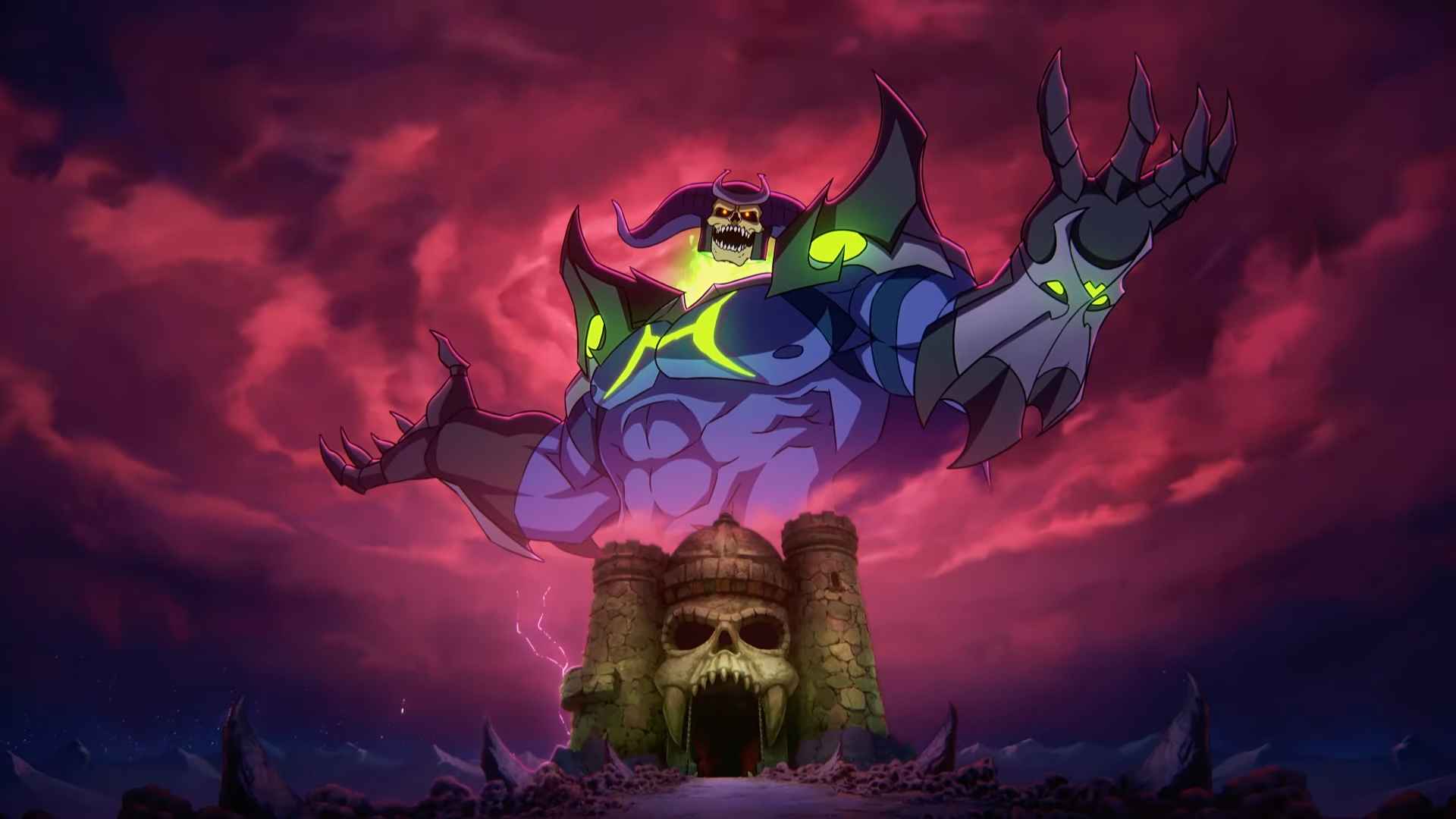 From Masters of the Universe: Revelation Part 1 Featuring Skeletor

With such noble sacrifices also came some returning familiar faces that included Prince Adam in Preternia. He already had the hold of one-half of Sword Of Power when Teela and her team came looking for the same. He received a Reprieve and could return to Eternia. But this time, if he dies, he would cease to exist and won’t return to Preternia. Teela, Prince Adam, Evil Lynn, and the rest of the surviving members came back to Eternia with the sword intact.

It was time for Prince Adam to say those magical words and bring back magic to Eternia. He did, but while doing so, someone stabbed him in the back. It turns out it was Skeletor who was hiding inside Evil Lynn’s wand all along and was manipulating her. With Skeletor’s return and the sword in his hands, Evil Lynn also switched sides. Skeletor lifted the Sword Of Power to recite those words. He became the Champion and controller of all the magic that flowed through Eternia and the universe.

Also Read: Best Animated Films To Stream On Netflix – For Viewers Of All Ages

Masters of the Universe: Revelation: Part 2 Plot – What Is It About?

Masters of the Universe: Revelation: Part 2 sees Skeletor taking the helm of Eternia and the universe. It took years of battles and redemption, but now Skeletor knows all the secrets of Grayskull. The ones that were protected by He-Man all along. Skeletor believed in power, and he has it now. A new era begins with new rules laid down by Evil Lynn. We also saw Skeletor imprisoning the likes of Man-At-Arms. But, it’s not all dark here and there, though. From the looks of the trailer, we can see that Teela manages to save Prince Adam. Now they either fight back or give up to Skeletor, who is now the strongest in the universe. 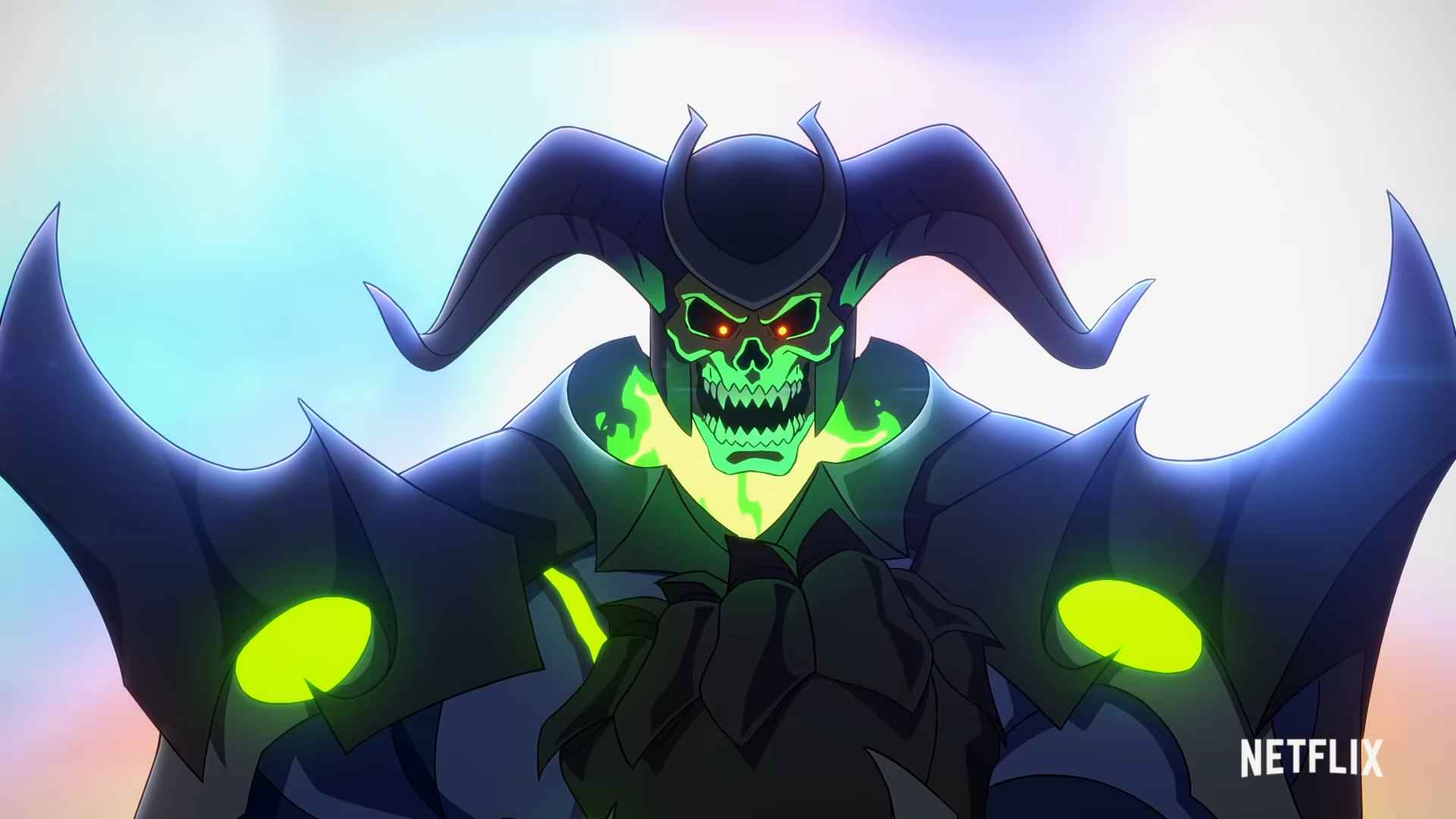 The only way to stop the sorceress was another sorceress. So it seems like Teela is acquiring new powers for her own. Skeletor on his side is waiting for the historic moment when he will kill He-Man. But Prince Adam has some tricks in his arsenal too. It seems like the sword only worked as a conduit all this time. Prince Adam believes he is the reason he can attain those powers, not the sword.

So, Prince Adam goes on to say those magical words without a sword and returns to one of the forms of He-Man. The spark and power are reclaimed by Prince Adam. The battlefield is equal; the question is who survives to rule Eternia? He-Man’s army is certainly back, and they will be brewing into another battle with Skeletor to win back Eternia and the magic that flowed through it for years and maintained the universe all along. Check out the official trailer of Masters of the Universe: Revelation: Part 2 below.

How To Watch Masters of the Universe: Revelation: Part 2? 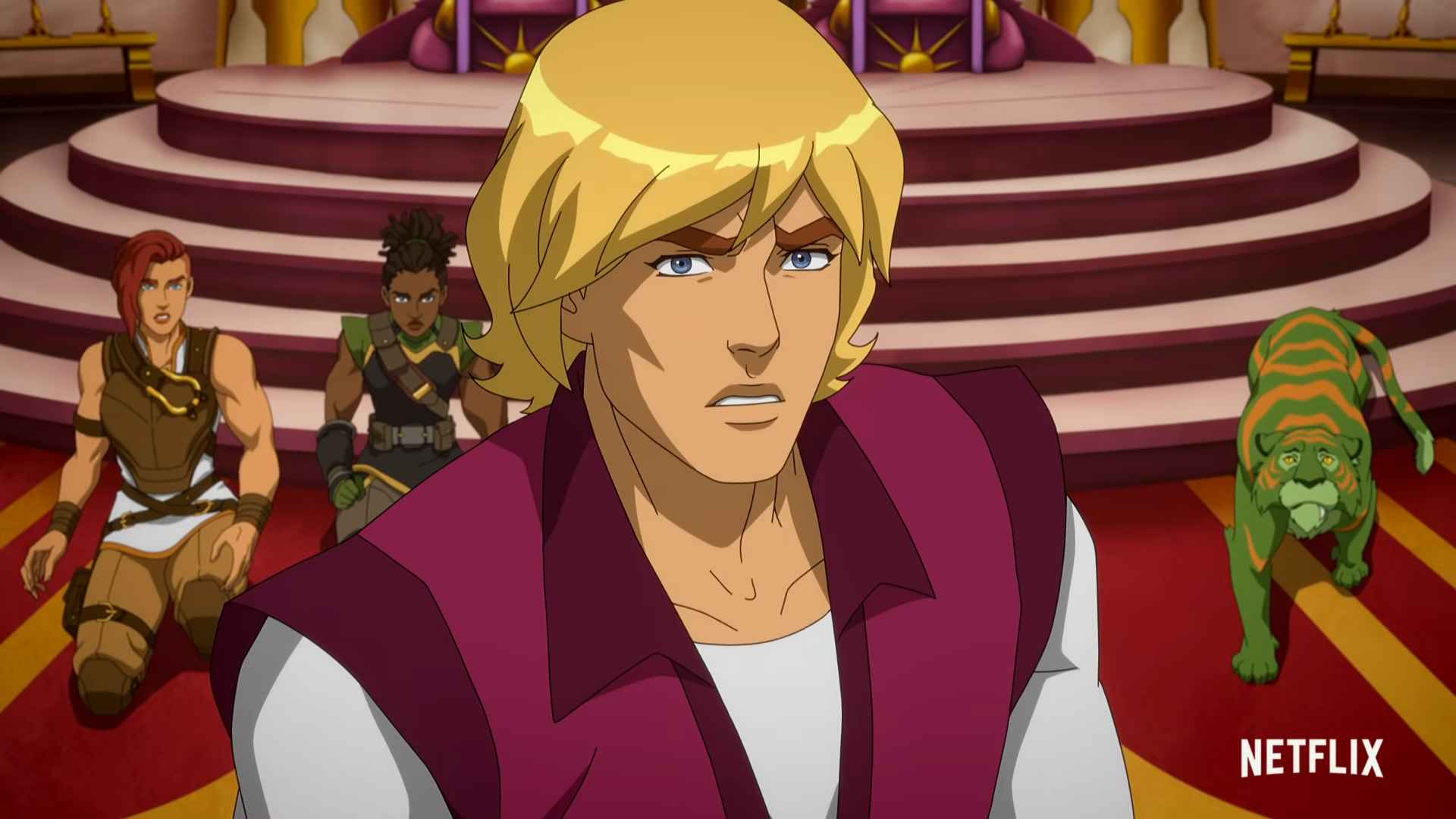 From The Official Trailer Of Masters of the Universe Revelation Part 2 Featuring Prince Adam, Teela, Andra, and Cringer