Jake Paul and Tyron Woodley's match became one of the trending topics on the internet. 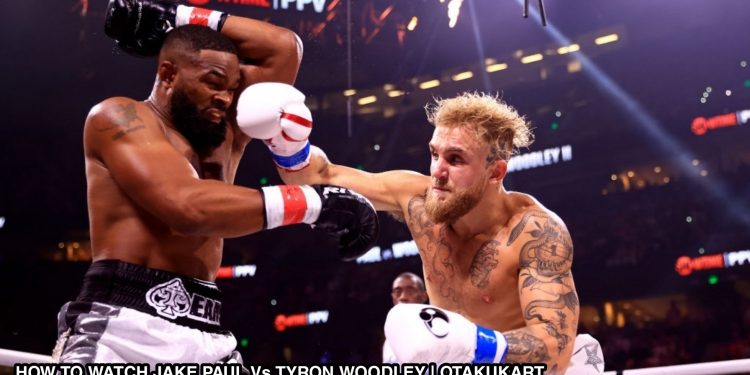 Jake Paul is a popular American boxer, and currently, he has become a subject to massive media firestorms. This is certainly because of his Knockout punch to Tyron Woodley. Even though they had a tough match together, many fans still think that the match was fixed, while some of them find this battle to be truthful. Moreover, with one single punch, Jake landed Woodley to the ground. And since then, many fans have wanted to know how to watch Jake Paul Vs Tyron Woodley. The match began with multiple loopholes. Where in, the punches made the match even more interesting.

But still, things became pretty difficult for them as controversies began circling both of them. Many fans didn’t like the match much. Because the first half of the match was pretty boring, and it was filled was clumsy punches, and gradually both of them moved to the center of the ring, and soon, Jake found his opening to land a punch. This, in turn, generated massive attention, and now everyone wants to know how to watch Jake Paul Vs Tyron Woodley. After the match ended, Jake revealed his feelings about his win. He opened up about his thoughts and shared that 2021 was a really good year for him.

Who Is Jake Paul?

Jake Paul is a popular professional boxer. But he garnered most of his recognition from his social media handles since he became a pretty famous social media personality. Most of the time, he landed himself into a lot of troubles and controversies. But he still had a lot of fans. Moreover, he has been a part of Bizaardvark, a Disney channel show. To be more precise, he got involved in several things related to criminal charges. Jake started his journey with professional boxing in 2018. He has been a part of many competitions with several prominent personalities like Nate Robinson and Ben Askren.

Also Read: How To Watch The Hand Of God?

Who Is Tyron Woodley?

The 39-year-old Tyron Woodley is pretty versatile in terms of his career. Tyron is a professional boxer and a former UFC champion. He started his professional career in the year 2009. Because of his exceptional skills, he was nicknamed The Chosen One. He was interested in boxing for a very long time. So he would always participate in different sporting events, out of which football and wrestling were his favorite sports. Tyron joined official wrestling programs in the early 2000s. Over these years, he has been an All-time American champion around two times.

Jake Paul Vs Tyron Woodley had a great impact on their fans, and Jake’s win created a huge emphasis on his fame. You can officially watch the match on Showtime PPV and FITE TV in South Africa and the United States. For Australian viewers, the wrestling tournament is available in Kayo Sports. Before having a face-off in this match, Tyron and Jake had a very controversial match in the past. The match first took place in August 2018. Moreover, their rivalry gained massive attention since the last fight was pretty different.

Speaking of the last game, Paul was easily beaten up by Woodley, and at that time Jake was at the starting point of his career. So it was pretty difficult for him to beat a wrestling champion. Moreover, many fans are watching the show again and again. Because this was surely an iconic moment for all the Jake Paul fans. Jake has been a very popular personality and most of the time, people have criticized him for his actions. Even in this match, many people believe that the fight was manipulated. Moreover, his representation of cultural differences created a huge gap too.

One time he was even blamed for racist profiling. Woodley’s fans were pretty upset with this revelation because many viewers believed that Jake made certain hand gestures to Woodley while he was going in for his knockout punch. Jake and Tyron received massive hate through the internet as many felt that he had been signaling Tyron to give in so that he could end the match. Twitter became a platform for these accusations, and everybody shared the snippet from the match. On the other hand, Jake’s fans defended him, and as per them, he was preparing himself for the final hit.

Also Read: ‘How Do You Say Seal In French’: TikTok Meme Explained