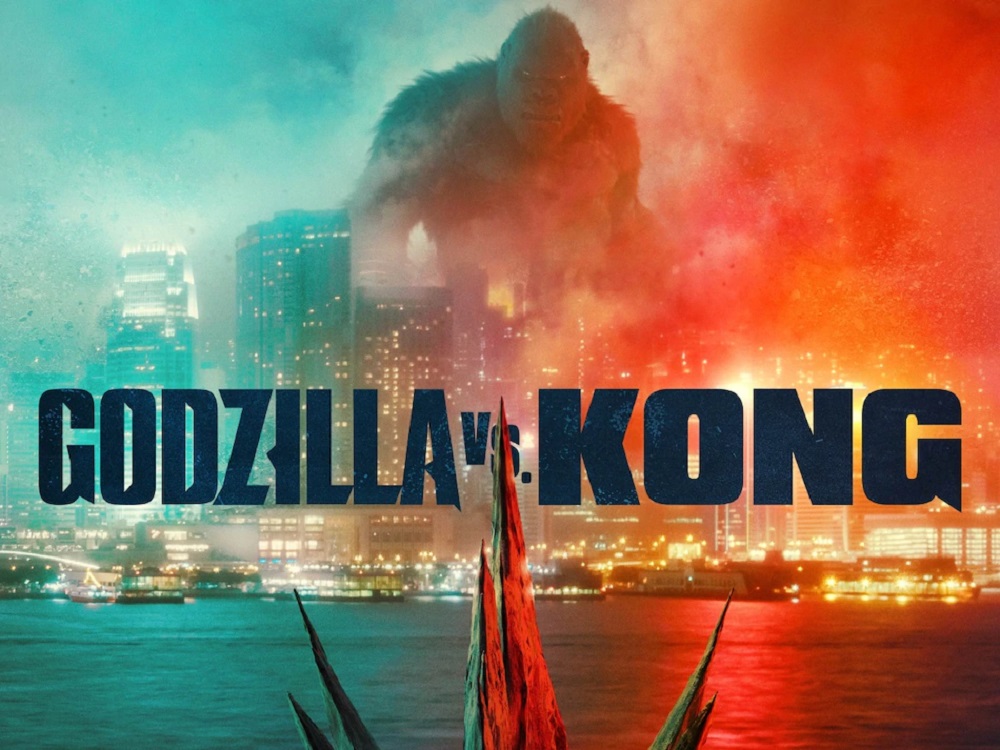 "Godzilla vs Kong" is out now and here's how you can watch the movie online.

“Godzilla Vs Kong”, the American sci-fi monster film is now out and is screening at theatres near your house. Directed by Adam Wingard, the film was released on an international level theatrically on 24th March 2021. It received many positive reviews as the film was highly praised by viewers all across the globe as well as the critics. Moreover, the movie now has an average score of 80% on Rotten Tomatoes, 88% on BookMyShow, and an average rating of 7.4/10 on IMDb. Consequently, the movie has been rocking the theatres in the past few weeks. However, it is not possible or rather safe for everyone to go out and enjoy the movie. So, let us see further in the article how you can stream the movie online sitting comfortably at your home.

Everything you need to know about “Godzilla vs Kong”:

“Godzilla vs Kong” is an American monster movie directed by Adam Wingard. It is based on Godzilla & Mechagodzilla by Toho, and King Kong by Edgar Wallace & Merian C. Cooper. The movie runs in the genre of science-fiction and action with Eric Pearson and Max Borenstein handling its screenplay. Terry Rossio, Michael Dougherty, and Zach Shields have written the story whereas Thomas Tull, Jon Jashni, Brian Rogers, Mary Parent, Alex Garcia, and Eric McLeod have produced it. Legendary Pictures is the production company behind this project with Warner Bros. Pictures (worldwide) and Toho (Japan) acting as its distributors respectively. The movie has a runtime of approximately 113 minutes and was built on a budget of $160-200 million. Anyhow, now let us have a look at the main cast for this super sci-fi movie. 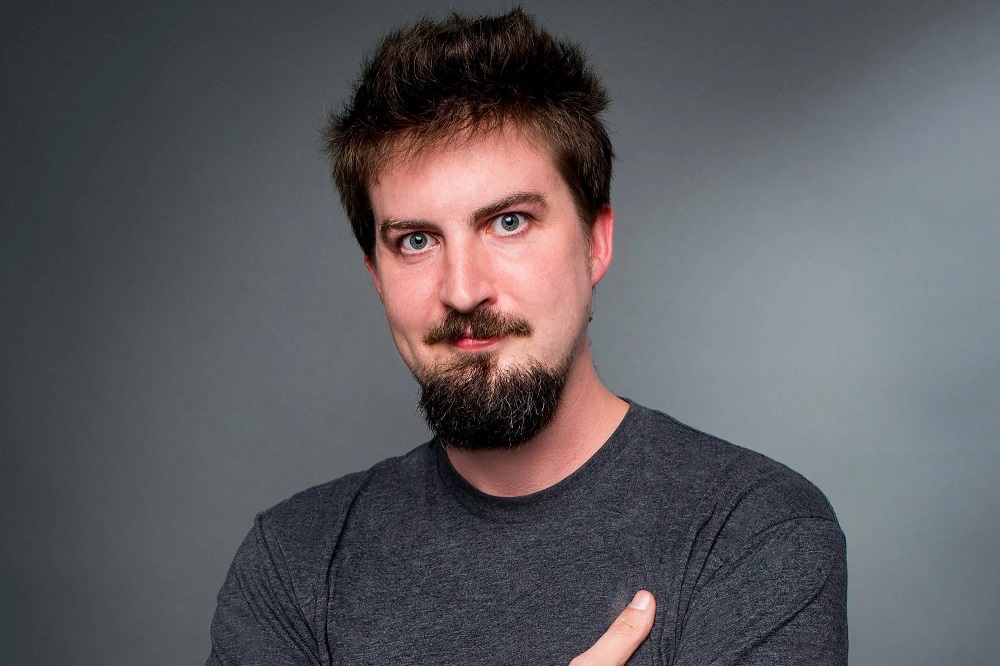 Adam Wingard, the director of the movie “Godzilla vs Kong”.

Alexander Skarsgård as Dr. Nathan Lind: Alexander Skarsgård is a Swedish actor who is popular for his role of Eric Northman in “True Blood”. Some of his other best works include “Generation Kill”, “Big Little Lies”, and “The Stand”.

Rebecca Hall as Dr. Ilene Andrews: Rebecca Hall is an English producer, director, writer, and actress. She has been a part of many famous movies and shows like “Iron Man 3”, “Christine”, and “Tales from the Loop”.

Shun Oguri as Ren Serizawa: Shun Oguri is a Japanese voice artist and actor. Some of his best works include “Diner”, “Lupin 3D”, and “Rich Man, Poor Woman”. 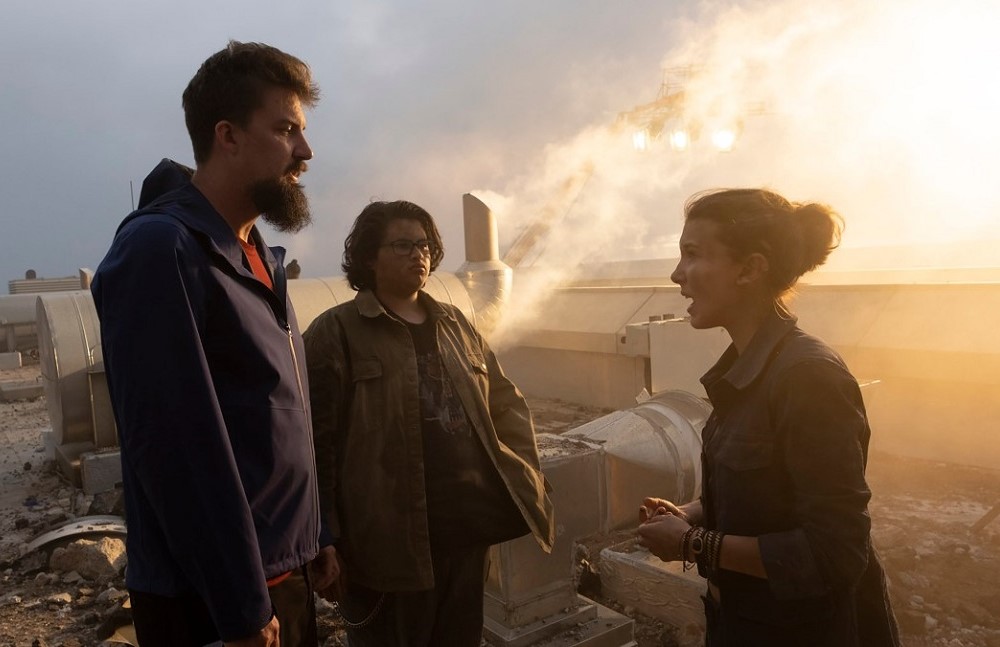 A still from the sets of filming of “Godzilla vs Kong”.

Eiza González as Maia Simmons: Eiza Gonzalez is a Mexican singer and actress. Some of her best works include “Hobbs & Shaw”, “From Dusk till Dawn: The Series”, and “I Care a Lot”.

Julian Dennison as Josh Valentine: Julian Dennison is a New Zealand actor. He is popular for his works from “Deadpool 2”, “Paper Planes”, and “Shopping”.

Lance Reddick as Guillermin: Lance Reddick is an American musician and actor. Some of his best works include “Oz”, the “John Wick” franchise, and “Lost”.

Kyle Chandler as Dr. Mark Russell: Kyle Chandler is an American actor who is best known for being a part of films and series like “Homefront”, “Friday Night Lights”, and “Game Night”.

Demián Bichir as Walter Simmons: Demian Bichir is a Mexican-American actor and one of the members of the Bichir family of actors. Some of his best works include “A Better Life”, “The Grudge” (2020), and “Weeds”. 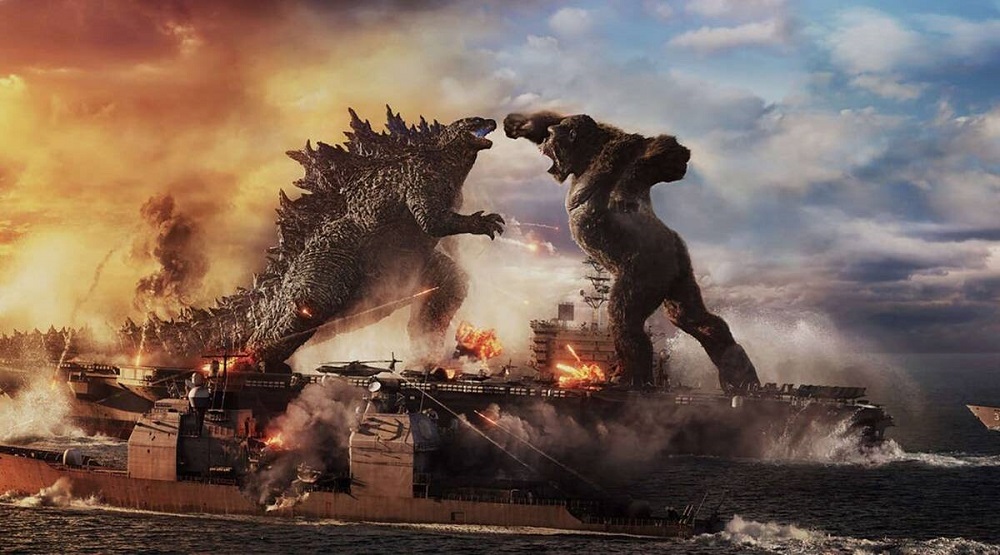 A still from the movie “Godzilla vs Kong”.

What is the movie “Godzilla vs Kong” about?

In the movie “Godzilla vs Kong” Godzilla (the kaiju) who was ruled as the protector of the earth after the events of the previous movie has become rogue. So, to protect humanity from the wrath of the king of the monsters, humanity chooses Kong, the Skull Island native giant gorilla to fight the radioactive creature. Both of them are merciless and want to prove themselves as the alpha giant on earth. Monarch, the shadowy organization set up the collision of the two titans. Later on, a new wicked organization comes into play that wants to knock down both the monsters. Consequently, in the fight for supremacy between Kong and Godzilla, one will surely fall down. As a result, the other will pave the way for the other to become the incontestible king. You can watch the official trailer for the film below.

How to watch “Godzilla Vs Kong” online?

Legendary Pictures released the movie “Godzilla vs Kong” on 24th March 2021 (internationally) and 31st March 2021 (US) respectively in the theatres. However, the movie also got a simultaneous release on the digital platform of HBO Max. So, you can enjoy the movie in theatres with all its cinematic glory. However, if you want to watch the film sitting comfortably at home, it is available online on the official website of HBO Max or its app. The movie will be streamed on HBO Max only for the month of April 2021 (i.e. for approximately 31 days from its theatrical release date). Nevertheless, it will definitely get a proper Video On Demand release in the coming future. So, brace yourselves and enjoy the sci-fi action as two monsters fight it out to declare their supremacy. For more updates about the movie and its release, stay tuned.