The Thai version of the famous series 'Boys Over Flower' is here. But is there a way to watch it online? 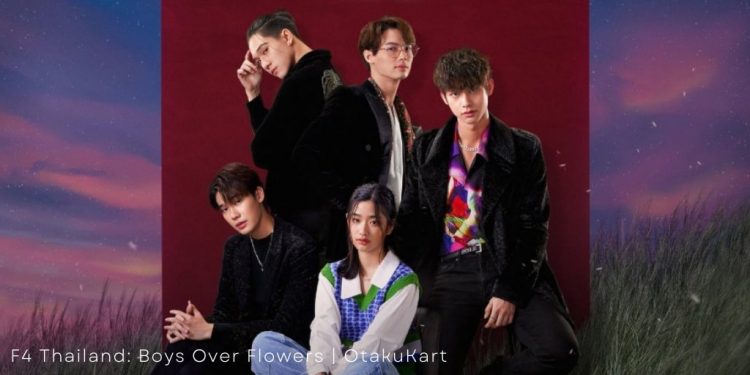 F4 Thailand: Boys Over Flowers has already captured viewers’ hearts with its Episode 1! Asian drama buff may know there are different versions of the famous series ‘Boys Over Flower.’ Although the drama narrates a typical cliche storyline of a poor high schoolgirl and a rich, handsome high schoolboy falling in love, we still enjoy those versions. However, the Thai version has brought something different not in terms of plot but the executing the drama. Not to forget, the gorgeous casting has brought distance charm to it, making the series more enjoyable!

The series shows a little more realistic side of the overall storyline, which we have not seen in any other versions. For instance, the story directly jumps into the main plot showing how bullying can affect one’s life. Although only one episode has been released, it has already proved that it will be one of the best versions of ‘Boys Over Flowers.’ Therefore, fans should look forwards to the upcoming episodes. The epic war between the poor girl Gorya and the infamous F4 has already been declared! All we have to see is which side lost first!

The Thai series F4 Thailand: Boys Over Flowers was premiered on 18 December 2021 on GMM25. It has taken GMM25’s Saturday time slot and will be airing at 8.30 pm ICT. As for the other countries, F4 Thailand episodes will release on the same day (Saturday) at 8.30 am in the USA, 1.30 pm in the UK, 7 pm in India, and 12.30 am in Australia (Sunday). Since the series is scheduled for 16 episodes, we have a long to go. If you are wondering how to watch ‘F4 Thailand: Boys Over Flowers’ online, don’t worry! Because the drama is streaming on various platforms, making it easier for both; domestic and global viewers.

Besides their YouTube channel, both domestic and international viewers can watch F4 Thailand: Boys Over Flowers on Viu. It is a Hong Kong-based OTT video streaming platform accessible in 16 markets across Asia, Africa, and the Middle East. Therefore, it may not be available in some nations. So don’t forget to check out which channel is the best for you to watch F4 Thailand: Boys Over Flowers online!

What Happened In The Story So Far?

The first episode of F4 Thailand Boys Over Flowers is already out. It shows Gorya’s school days in one of the prestigious high schools, Kocher High School Bangkok. Although it was her dream to be in the same school as her idol Mira, all fantasies break after entering the school. And the source of it is the school’s elite group of four richest, handsome boys, F4! They are one of the worst bullies who go any length to torture their prey. However, she discovers Ren is slightly different, one of the members of F4. Gorya knows they cross the limit. But, there is nothing she can do until that one day.

Gorya’s only friend Hana accidentally spills her food on Thyme, the leader of F4. He orders her to lick his spoiled shoe in exchange for his forgiveness. Hearing that ridiculous command, Gorya can’t stay low and finally stands up against him. And thus, everything turns into a mess. He forgives Hana but sticks the red card in Gorya’s locker, making her first girl target of bullying! Even Hana turns her back to Gorya, leaving her alone during one of her weakest moments.

Thankfully, Ren shows up at the right time, saving her from Thyme’s minions. Seeing her exhausted daughter, Gorya’s mother gifts her a new pair of shoes. Gorya begins her day with a new determination, only to find her shoe getting kicks from students, leading her to the bullying spot! By the end of Episode 1, Thyme cuts her shoe and dumps it in the garbage, saying trash should be where it belongs. Seeing her mothers’ gift torn like that, the enraged Gorya kicks Thyme in front of everyone, accepting his challenge to see the end! Therefore, don’t forget to check out how this war continues in the upcoming episodes of F4 Thailand: Boys Over Flowers!

‘Tinted With You’ Episode 1: Meet the Exiled Crown Prince