Is Demon Slayer Season 2 available on streaming giants like Netflix, Funimation and Crunchyroll? Here's everything to know 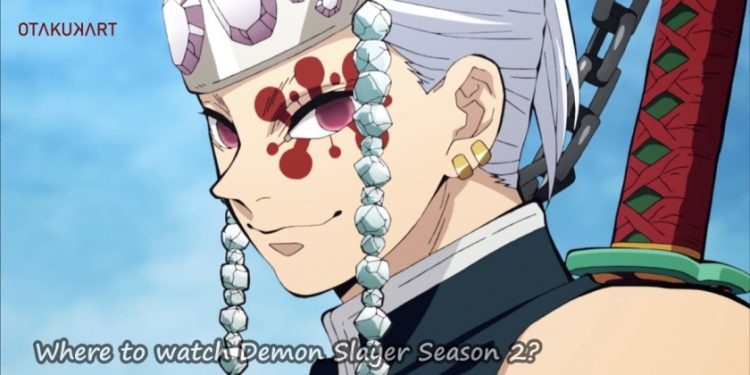 Where to watch Demon Slayer Season 2?

The Demon Slayer Season 2 has already started airing, and the Entertainment District arc has begun to pick up the pace. The recent-most episode ended with Tanjiro finally encountering the demon dwelling in the shadows of the Entertainment District. In case you don’t want to miss out on this masterpiece, we have brought together all the legal sources of watching Demon Slayer Season 2.

It’s no secret that Demon Slayer is of the most popular franchises of recent times. The Demon Slayer: Mugen Train’s massive success is proof of how perfectly the series has been executed so far. The hype is only going to increase from here. All eyes are currently on Season 2, where Tanjiro and his friends will be on a dangerous mission alongside their new mentor, the Sound Hashira Tengen Uzui.

Demon Slayer Season 2 revolves around Tengen Uzui’s journey of uncovering the demons hidden behind the glamour of the Entertainment District. He had his three wives surveying the area, but gradually they stopped sending any intel. Thus, Tengen had no other option but to infiltrate the district himself with Tanjiro, Inosuke, and Zenitsu. After days of investigation, they find out that the demon terrorizing the area is no ordinary; rather, it’s an Upper Moon 6. The season will cover the Entertainment district arc, which stretches from Chapter 70 to 99 of the original manga.

Yes, Demon Slayer Season 2 is available on Netflix but only in select countries like India and Japan. The streaming giant hasn’t released Demon Slayer Season 2 for all the countries yet. Actually, Netflix uses geo-blocking websites to prevent viewers from other countries. But don’t you worry, it is expected that Netflix will make it internationally available in no time. In case you can’t wait that long, you can try using a good-quality VPN to change your location.

Where to Watch Demon Slayer Season 2?

Forget about waiting for the global Netflix release. You can watch Demon Slayer right now on anime streaming platforms like Hulu, Crunchyroll, and Funimation. Season 2 is going pretty well till now, so be sure to take any of these subscriptions. New episodes are released on Sundays (23:15) JST.

Not to mention, the episodes are only available in the Japanese language with English subtitles in it. The English dubbed episodes are yet to come but be assured that they will be available within a few months. Season 2 will be of 18 episodes in total, with 7 of them showing the Mugen Train arc, and the rest will be the Entertainment district arc. The first 11 episodes have already been released, leaving us with the remaining seven more episodes to look forward to.

Considering Demon Slayer’s widespread popularity, Season 2 can be made available on various illegal platforms. Before resorting to any of them, we mustn’t forget that a pirate website won’t give you the best quality. Such websites are insecure and often used as bait for a possible malware attack. Moreover, watching the series legally will directly support the cast and staff members working behind the series, thereby inspiring them to work harder. It will support the anime community as a whole.

Should We watch Demon Slayer Mugen Train Before Watching Season 2?

The first seven episodes of Season 2 repeat the events of the Mugen Train movie. So, in case you haven’t seen the film yet, you can directly watch Season 2 from episode 1. However, if you have seen the movie like most others, you can start watching from episode 8, which picks up right after the climax of the Mugen Train arc. It goes without saying that the anime episodes are more elaborate than the film, so it’s worth watching the arc twice if you are a die-hard fan.