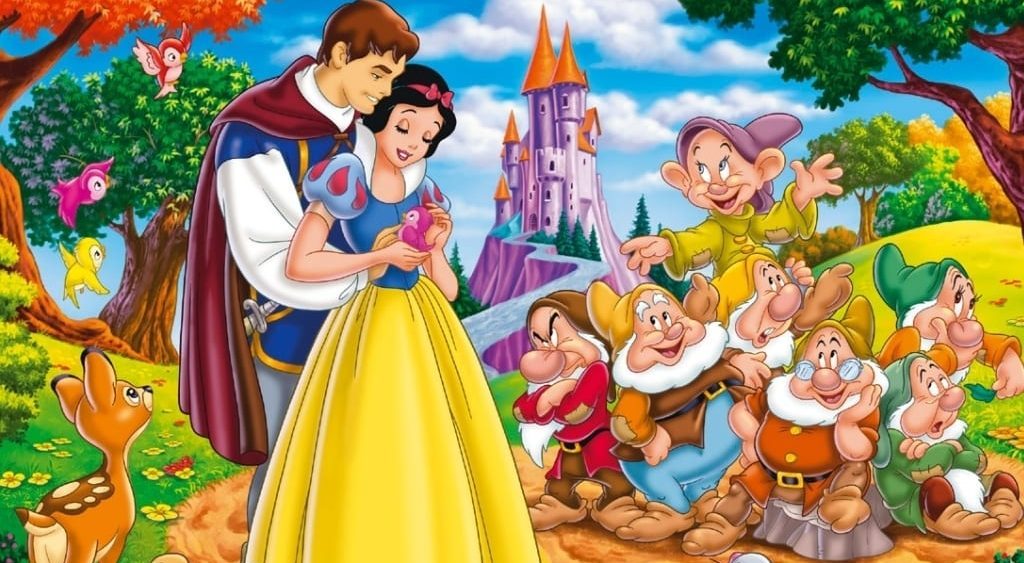 We all are very familiar with the story of Snow White and the Seven Dwarfs. A Grimms Brother fairy tale, originally written in German and dating back to the 1850s, is about the beautiful princess, Snow White. The story contains all the elements of magic. There are 7 dwarfs who originally did not have any names. However, they were given names later in the 1912 Broadway, and then different names in the 1937 Disney Movie. The latter, we are all familiar with. The Disney rendition of the tale goes like this: 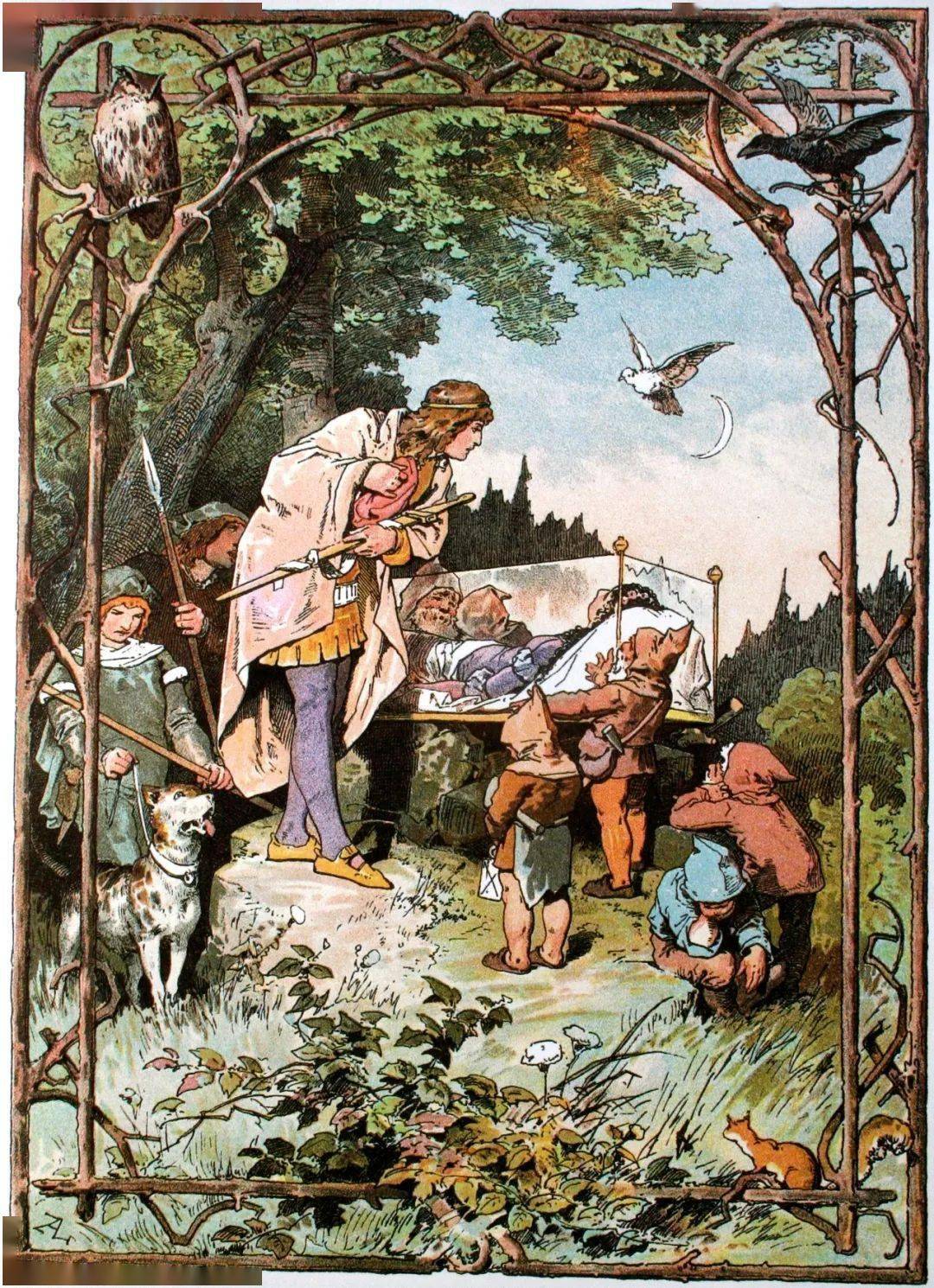 Also Read: Raya And The Last Dragon: Disney Should Make A Raya/Namaari Romance

Snow White is born to a King and his Queen. Her mother, the Queen dies in childbirth after naming her. A year later, the King remarries a beautiful but wicked woman who in her possession has the magical mirror. The Queen asks it every day, “Magic mirror on the wall, who is the fairest one of all?” The Mirror’s answer is the Queen until Snow White turns 7. The Queen becomes envious and jealous of her stepdaughter. And she orders a huntsman to take her to the forest and kill her and bring her heart back. However, the huntsman is unable to kill the kind-hearted and innocent Snow White and leaves her in the forest. 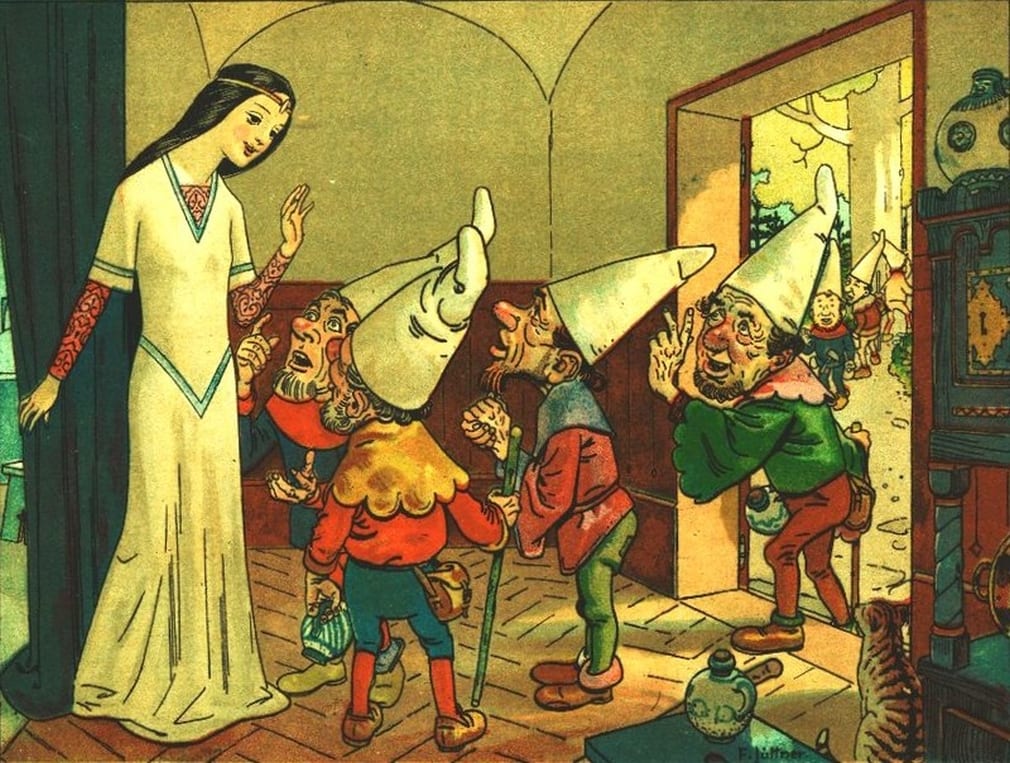 Snow White and the Dwarfs (Franz Jüttner’s illustrations from Sneewittchen)

Snow White discovers the house which belongs to the dwarves, but unbeknownst to its original owners, she enters, cleans the place, and sleeps in the most comfortable bed of all. When the dwarves return and find her, they take her in after knowing her story. 10 years later, Snow White grows up to be a beautiful and elegant maiden. Meanwhile, the Queen asks her mirror the same question. Its answer is the same. The mirror also tells the Queen where she is living!

Also Read: Percy Jackson Disney Plus TV Series: What Is It About?

As such, the Queen goes to Snow White, dressed as an old, haggard peddler. She laces up a corset on Snow White so tight that she faints, but the dwarves come right on time and revive her by loosening the laces. Next, the Queen comes disguised as a comb-seller and tries to kill her with a poisoned comb. Again, she is saved by the dwarves. Finally, she comes disguised as a village woman and gives her a poisoned apple which looks delicious and one-of-a-kind. She eats the half, which is wholesome to prove herself trustworthy. Snow White eats the other half and immediately dies. The dwarves cannot revive her, so they place her in a glass casket. 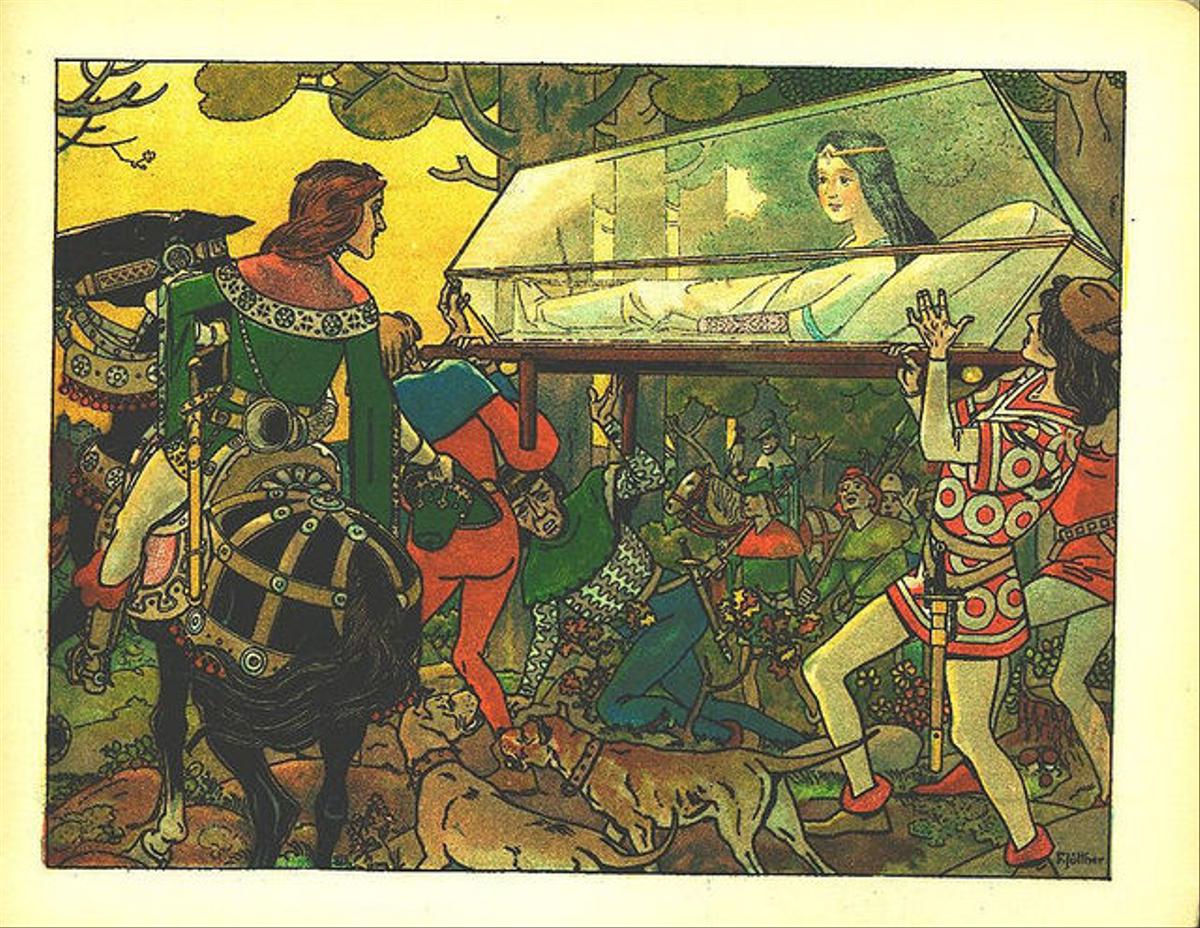 The prince comes and falls in love with the dead woman — which is weird, but who are we to question it? He takes her back to his palace, and while in transportation, his servants drop Snow White, and the piece of apple is dislodged from her throat, reviving her. The princess marries the prince, and they make the Evil Queen dance on hot-iron shoes until she dies.

They live Happily Ever After. This is the real version, much bloodier than the Disney version, which is rosier, and the Queen dies by lightning, and the Prince wakes Snow up with True Love’s Kiss. Watch a part of the Disney rendition here:

Snow White’s Prince Florian: How Old is He?

Prince Florian, or just known as “the Prince,” is the second protagonist and main male protagonist of the story. Although the refurbished edition of Grimms Brother’s originals published in 1857 would come to mean that the Princess was at least 17 when she “died” and met the Prince, many people are coming up with accusations that Snow White was apparently 14 when the whole fiasco took place. 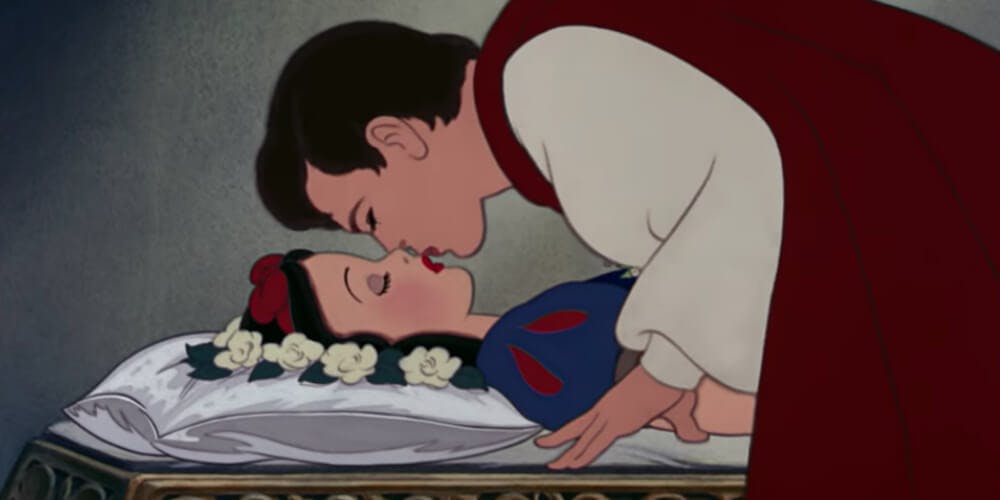 The Prince kissing the “dead” girl to revive her

This question was raised by a Twitter user, @diordeaux did the research and came to the conclusion that Snow White and Prince Florian, in fact, had a 17-year-old age gap between them! While Snow was only 14, Prince Florian was supposedly 31.

The originator of the tweet, @diordeaux, did the math and found that Snow White and Prince Florian have a 17-year age gap between them. Snow White is apparently 14, while Prince Florian is 31. The tweet, which has now been deleted, was released back in 2019 and went viral within seconds. Some people demanded that the police be called while others pointed out the “other questionable things” the story has except the age gap, which is, to be honest, used to be gigantic more often than note back in those days. Here’s a picture: 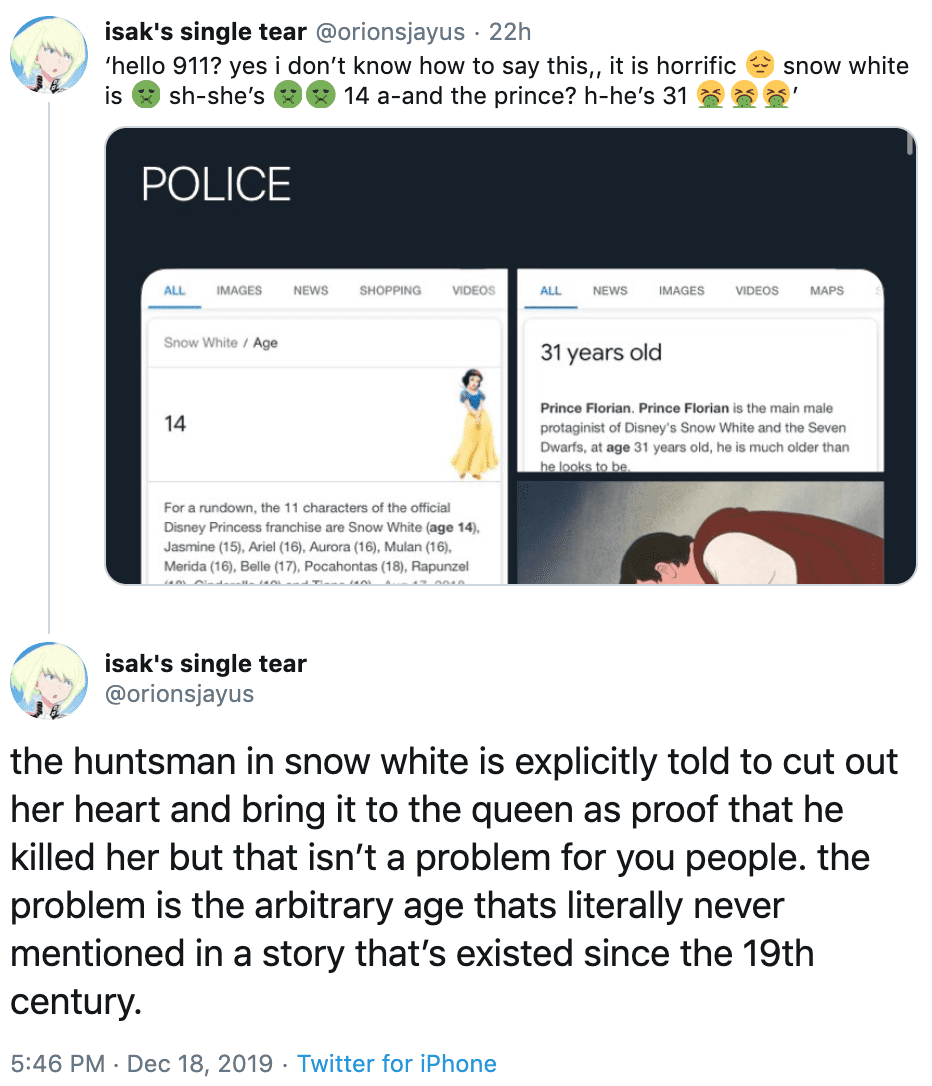 This twitter also points out the same fact as I had said above. The age of Snow White should be around 17, according to the final version of the story, while the Prince’s age is never actually mentioned. The age of the prince is just all speculation, and the really disturbing fact about the story should be the one this user mentioned above, and the fact the Prince kissed a dead girl (according to Disney, anyway). And the fact that he fell in love with the face of a dead maiden! The “speculated” age gap is, according to me at least, the least of our concerns.