The Akatsuki had originally started out as a group of people who aimed for world peace and later turned into a group of criminals that wanted world domination. 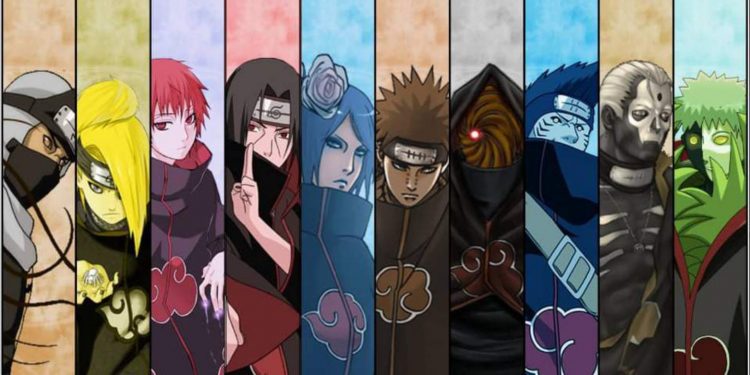 The Akatsuki had originally started out as a group of people who aimed for world peace and later turned into a group of criminals that wanted world domination. The Akatsuki group, founded by Yahiko and his two friends – Konan and Nagato, was formed as a rebel group. But the aim of these rebels was to fight the oppression and dictatorship that their village was facing. In an attempt to save Amegakure and its people during the Third Great Shinobi War, this group started gaining members. Akatsuki’s popularity drew Hanzo to them. Hanzo of the Salamander was the leader of the country and was well known as a ninja. He lied to Yahiko about wanting world peace and joined the group. But he had plans for world domination. A plan that could use the members of the Akatsuki.

And that is how Akatsuki went from being a group of noble ninjas who wanted the best for their people and for the world in general to a group of criminals who wanted world domination over everything. The group at any time has ten primary members. All of the members are S-rated criminals from their own villages, with the exception of Nagato and Konan. These two original members remained in the group after Yahiko was killed by Uchiha. The members of the Akatsuki are made to work in pairs, except for Zetsu, who acts as the team’s spy. The pairs make use of their individual powers to capture the tailed beasts. These beasts, who are nine demons with immense power, would be used by the organization for their ultimate goal of world domination.

Also Read: Will Nagato Die in Naruto? All about Pain’s Last Battle in Naruto Shippuden!

Akatsuki has ten official members, along with a few unofficial members. The group, after the death of Yahiko, is led by Nagato, who now goes by the name of Pain. However, the groundwork for this organization was laid by Madara Uchiha, who was the leader of the Uchiha Clan. And since then, he was working with White Zetsu to bring about his plan to fruition, which was known as the Infinite Tsukuyomi.

Nagato, who now goes by Pain, is the leader of the Akatsuki Organisation. He had Uchiha’s Rinnegan secretly transplanted in him when he was just a kid. Nagato, being a war orphan, aims to create a peaceful world without any wars so that no one else would have to suffer the same way he did. He created the Six Paths of Pain out of corpses that he would control. One of the bodies belonged to Yahiko as well. Pain collects all the tailed beasts and seals them into a statue, except for the Nine-Tailed Beast, which is carried by Naruto. He is one of the strongest members of the Akatsuki, having mastered each elemental transformation and being able to destroy entire cities if he willed.

Another founding member of the original Akatsuki, Konan, was a Kunoichi from the Amegakure. Having a difficult childhood being a child of war, Konan was left to live by herself after her family’s death. She later became friends with Yahiko and Nagato. The three of them were taken under the wing of Jiraiya, who taught them how to survive on their own. After the making of Akatsuki and its widespread fame, Konan and the other two had to go into hiding. She was kidnapped by Hanzo because he was afraid of the increasing popularity of their ideas of world peace. Konan was even asked to kill Yahiko in order to live, but Yahiko killed himself in order to save his friends from Hanzo. Konan had to give in and accept Hanzo’s offer, and she became the one in charge of hiring criminals from their villages. 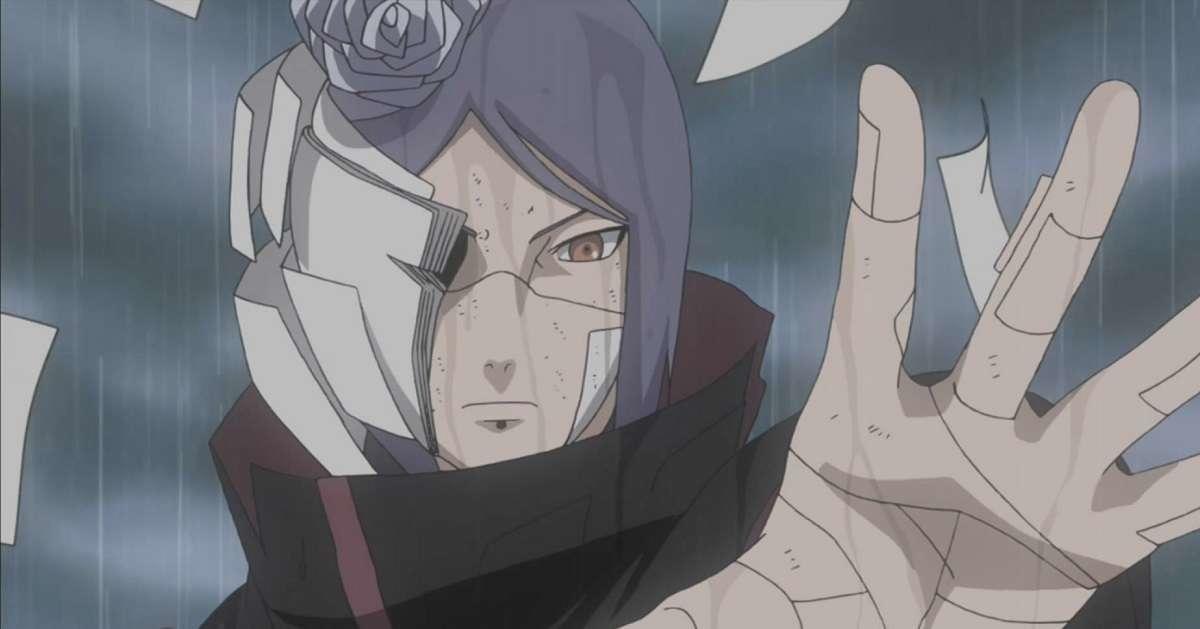 Working as the organization’s spy, White Zetsu is half a member of the Akatsuki Organisation. He was created by Madara by combining the Outer Demonic Statue of the Six Path and the DNA of Hashirama Senju. White Zetsu worked with Obito for a long time because of his ties with Madara. The Black Zetsu is the physical manifestation of Kaguya Ōtsutsuki’s will. He had the ability to make people trust him by appearing loyal and obedient. He was entrusted with the secrets of Akatsuki, as well as Madara’s Infinite Tsukuyomi Plan.

Also Read: Will Konan Die in Naruto? The only female Akatsuki Member

Obito Uchiha was a member of the Uchiha Clan under Konohagakure and had taken on the persona of a guy named Tobi. Obito went from wanting to become a Hokage to someone who wanted world domination by any means necessary. During the Third Shinobi World War, Obito gave away his Left Sharingan to Kakashi because he was sure of his death after being crushed under a giant rock. He was then rescued by White Zetsu, who was ordered by Madara to do so. Despite the right side of his body being crushed, his right Sharingan survived.

After he fails in saving Rin from the Kirigakure Ninja, he tells Madara that he’s ready to do anything so that the three of them (Obito, Rin, and Kakashi) can be together. Madara tells him his Infinite Tsukuyomi Plan, which would remove the need for the death of anyone. Tempted by the idea of being next to Rin and Kakashi, Obito accepts Madara’s offer and starts taking steps towards making this plan a reality.

A shinobi of Kirigakure’s Hoshigaki Clan, Kisame was more widely known and feared as the Monster of the Hidden Mist. He’s an S-rank missing-nin who originally worked for the Seven Ninja Swordsmen of the Mist. He was approached by Madara himself and was asked to join the Akatsuki. Kisame was enticed by Madara’s vision of world peace and his Infinite Tsukuyomi Plan. He has a very destructive personality and is always looking to get into fights, but is always held back by his partner Itachi.

Itachi was a shinobi of Konohagakure’s Uchiha Clan. He was the oldest of his family and extremely talented at everything. Itachi Uchiha was even allowed to graduate early from the Academy because his skill set out skilled all of his classmates. He was the youngest Anbu Captain at the age of 12. But he turned into a criminal after killing his entire clan along with Obito. He spared his brother Sasuke and left to join the Akatsuki, but not before asking Sasuke to seek revenge against him. Even after contracting a terminal illness, Itachi kept himself alive so that he could be killed at the hands of Sasuke. He passes his Sharingan power to Sasuke before he eventually dies.

Also Read: When Does Naruto Find Out About Jiraiya’s Death?

After witnessing the bodies after a mass murder at the Valley of Hell, he was angered at the sight of Yugakure turning into a tourist spot from a shinobi village. He left his village and joined the Jashin cult, but not before killing his neighbors. While in this cult, he achieved immortality and followed the religion’s rules of utter violence and destruction. This made him a missing-nin. Upon his initial meeting with the Akatsuki clan, he was actually being hunted by the Akatsuki members. He was offered to join the Akatsuki organization by Konan, which he accepted.

Also Read: 10 Life Lessons From Naruto That Made Me a Better Adult

Starting out with making puppets out of paper, Sasori became a missing-nin after he started using human puppets. His first experiment with human puppets was his own best friend, Komushi. He even had the Third Kazekage as his dead puppet before he passed away. Sasori was approached by Konan to recruit him into the Akatsuki. He declined the offer and was asked to fight against her with the circumstance being laid that he’d have to join the Akatsuki if he’s defeated. Sasori fails in beating Konan and eventually has to join the Akatsuki.

He used to be a Shinobi in Iwagakure and had the explosion release Kekkei Genkai which was very helpful to him as a member of the Explosion Corps. Deidara used his talents in clay sculpture molds to make explosive clay after stealing the village’s kinjutsu. This allowed him to knead his chakra into substances, which further proved very useful on his path as a bomber. This made him an S-ranking missing-nin and gained him Akatsuki’s attention. Deidara was recruited by Itachi, which he declined but was asked to battle in favor of his freedom. He failed to defeat Itachi and had to join the Akatsuki.

He started as an elite Ninja of Takigakure, who was given the mission to kill the first Hokage, Hashirama Senju. He failed at this mission and was ridiculed by his village for failing. This made Kakuzu develop a violent hatred for Takigure, and so he fled the village, but not before killing the elders there. He stole their hearts and their prized forbidden techniques. After escaping, he lived off of bounties from the black market. He would tear out hearts from powerful shinobis to stay alive. He, later on, joined the Akatsuki, where he would end up killing most of his partners because of his short temper.

Who Is Corbin Bleu Married To? Everything About His Personal Life