Knowing alcohol is high in demand, Kang Ro Seo has started a mobile bar to pay off her brother's debt. But how long will she last with the danger lurking over her and Prohibition Inspector Nam Young tailing after her? 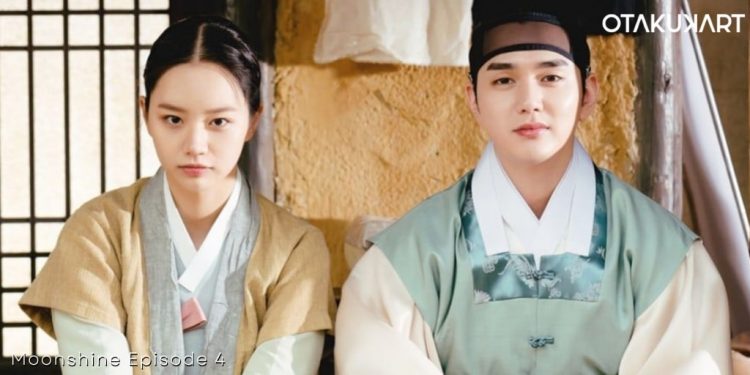 Moonshine Episode 4 is coming soon! The last week, Lee Hye Ri and Yoo Seung Ho have shown their comical chemistry on the screen. Seeing their characters with different personalities makes the drama more enjoyable! Not to forget, the childish bonding between Yoo Seung Ho and Byeon Woo Seok has also become fans’ favorite. It will be interesting to watch how this cat-mouse game will continue with Nam Young being Prohibition Inspector and Kang Ro Seo selling liquor. Besides the comical part, the threat lurking over Kang Ro Seo with the alcohol maker watching her all moves. Will Inspector Nam Young be able to save her life? Or will she become the next target of the notorious liquor maker, bootlegger?

The story reveals Nam Young accepting the new mission to capture five alcohol sellers. However, it is not as easy as it sounds when finding them is one of the challenging tasks than finding the makers or buyers of liquor! It is all thanks to Crown Prince Lee Pyo’s order, who instructed the head Inspector to make Nam Young quit within a month. Meanwhile, Han Yae Jin has already encountered Kang Ro Seo, and it seems she has taken a liking to her. With their mischievous personalities, both ladies will be good friends. The humorous ride will continue with Ro Seo’s mobile bar and Nam Young’s mission in Moonshine Korean drama Episode 4!

Moonshine Episode 4 will be released on 28 December 2021 at 9.30 pm KST on the KBS1 channel. Due to their diverse personalities, Nam Young and Kang Ro Seo always end up bickering. However, their humorous banter brings laugher to viewers with their crazy antics. Therefore, it will be fun to see how this chaotic duo will continue their separate mission. Will they cross paths and become one squad? or Will they go their separate ways? When Flowers Bloom, I Think of the Moon has taken the Monday-Tuesday slot of KBS2. All episodes will be broadcast for 70 minutes. Hence, don’t miss out on this comical ride of Kang Ro Seo and Nam Young!

What To Expect In Ep 4 Of Moonshine?

The upcoming Moonshine Episode 4 will revolve around Kang Ro Seo’s alcohol selling business and Nam Young’s new task. We all know Nam Young has already caught numerous liquor sellers to get acknowledged by the head Inspector except for the night mobile bar seller. Of course, Kang Ro Seo will not let herself get caught that easily. Therefore, in the upcoming episode, we will witness the cat-mouse game of Ro Seo and Nam Young coming closer to the end. It will be exciting to watch what decision he will make once he learns about Ro Seo’s mini business? Will he mercilessly arrest her and strip her down to a slave position? Or will he turn a blind eye to her matter, saving her only mean of income?

Another thing we will see is the development between the leads. Although Ro Seo and Nam Young always seem ready to fight, something will begin to change little by little after learning about each other’s circumstances. Then, there are also the second leads of the kdrama. For sure, the next interaction between Crown Prince Lee Pyo and Nam Young will be unforgettable with their childish action! Han Yae Jin also has caught viewers’ eyes with her beautiful but playful character. It will be super fun to watch all four coming together and becoming one of the best comical squads of this prohibition era! Therefore, viewers should get ready for some romance comedy action in Moonshine Korean drama Episode 4! Because all leads are coming with their crazy antics to fill your Monday-Tuesday with a lot of laughter!