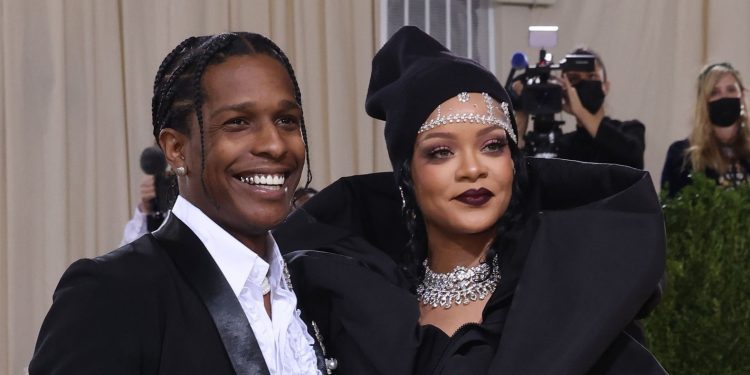 With friendship as a foundation, the couple, who have remained very secretive in their love life since reunification and have never publicly confirmed their relationship, seem to be getting stronger. Ever since they decided to go public with their romance, people have been busy predicting what will happen next for the duo. One of the speculations that Rihanna is pregnant with a baby of ASAP is circulating all over the internet. Also, people want to know How Long Rihanna And ASAP Rocky Have Been Together?

Rihanna and ASAP have been in a relationship since January 2020. That means they will soon be completing their two years of togetherness. Even though Rocky has been friends for almost a decade, it is believed that their relationship recently turned romantic. The power couple has worked together on a number of projects in the past, with Rihanna starring in Rocky’s music video or Rocky starring in Rihanna’s Fenty Beauty campaign. They first appeared together at the MTV VMAs in the year 2012, and the following year Rocky joined Rihanna as she embarked on her Diamonds World Tour. In the year 2018, the pair were spotted being close during Paris Fashion Week, but at the time, Rihanna was dating Hassan Jameel, a Saudi businessman, and Rocky was dating Kendall Jenner.

In early 2020, an anonymous source reportedly told Us that “Rihanna and ASAP hang out and hook up” and that “they have fun and always have chemistry”. A few days later, they were seen having dinner together at The Nice Guy restaurant in West Hollywood. Later that year, Rocky interviewed Rihanna for an interview with Vogue, where he mostly asked questions about fashion and skincare. In December 2020, the two were spotted vacationing together in Barbados, where they were photographed kissing each other. However, their relationship was not officially confirmed until May 2021, when Rocky called Rihanna “my lady” and “the love of my life”. The famous power couple made their red carpet debut as a couple at the Met Gala in September 2021.

Also Read: Lindsay Lohan Net Worth: How Much Does This ‘Mean Girls’ Actress Earn?

Rihanna’s most public relationship to date is Rihanna’s relationship with the Freaky Friday hitmaker Chris Brown from 2007 to 2009. They separated after an incident where Rihanna was physically assaulted by a father of two. The two separated until they reconciled for a few months in 2013, but quickly they again called it quits. Chris shares his love and support for his Ex-girlfriend Rihanna over the years, leaving emojis under her Instagram photos from time to time. After Dating Chris for two years, Rihanna was reportedly is in an on-off relationship with Drake between 2009-2016 and has released some bangers together, including “Work”, “What’s My Name”, and “Take Care”. However, things got worse between the couple, and Rihanna told Vogue in 2018 that the pair were no longer friends.

She then dated a professional baseball player “Matt” for less than a year, from January to December 2010, after breaking up with Chris. Matt, who played for the Miami Marlins, ended his relationship with the Savage X Fenty star Rihanna because her schedule had clearly become “too much” for him. After dating Matt for a few months, Rihanna was in a relationship with Travis Scott. Scott and Rihanna had a brief affair in 2015 that ended when it was deemed “too much” for the “Four Five Seconds” hitmaker. But soon, it was revealed that Riri, most famously known as Rihanna, and the rapper who had a baby from Kylie Jenner broke up.

When Did The Couple Make Their Relationship Official?

Rihanna has been close friends with ASAP since working together on their 2013 track “Fashion Killa” – the same year he remixed his track “Cockiness (I Love It)” and accompanied her on her Diamonds World Tour. They were linked romantically many times over the years, and it wasn’t until May 2021 that he confirmed their romance. They attended the British Fashion Awards together in December 2019, shortly after she was seen supporting ASAP at his concert that was held in Sweden. Since Rihanna and the rapper publicly revealed their relationship, they have been spotted together at several luxury industry events, and most notably, they were seen together walking the red carpet hand in hand at the MET gala.

Also Read: Dia Mirza Pregnancy: Has The Indian Actress Given Birth To A Baby?