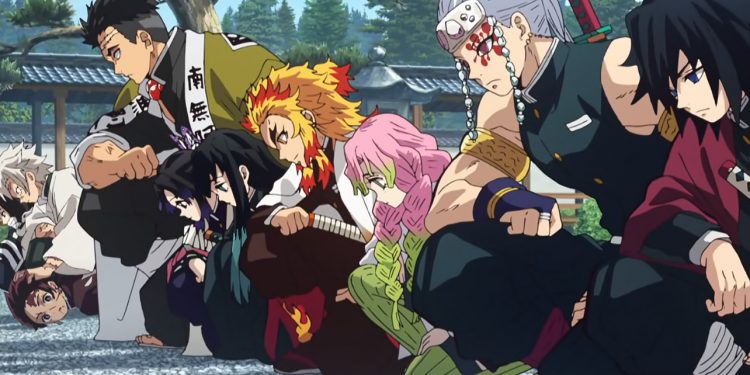 Demon Slayer: Entertainment District Arc has been one of the most awaited anime series. As Tanjiro, Zenitsu, and Inosuke go for a mission to help search for Uzui’s missing wives, a fight between Demon Slayers and Demons is rather unavoidable. Speaking of fights, there are just enough Hashiras who are yet to be seen in any fights. So, about fights and Hashiras, how about we as well look into one of Tokito’s fights? Well, this might be one of those spoilers which you may want to know. So why don’t we stay back and read until the end? Let’s see how our small and cute Hashira, Muichiro Tokito, defeats a demon. And not any demon, you see, he defeats an Upper Rank 5!

Demon Slayer: Kimetsu no Yaiba is a manga-based anime written and illustrated by Koyoharu Gotōge. The manga series was serialized in Shueisha’s shōnen manga magazine, and published in English by Viz Media, and produced by Ufotable. The story is about a teenage boy, Tanjiro, whose life was shaken when a human-eating demon killed his family. He took his younger sister, Nezuko, the only one who lived but was turning into a demon. He promised himself and Nezuko that he will turn her into a human again and also kill the responsible demon for the destruction.

We only know him as a Hashira. But ever wondered why is he so small and weak looking, despite his position and responsibility? In the first season, we got to know how he loses his memory and agrees to accept Tanjiro and Nezuko because he thinks he will forget soon! At first, this sounded a little rude for someone with a higher position. But manga readers are aware of his condition, and soon the anime fans will too. But let’s not dwell on that part and focus on what we’re supposed to.

Muichiro Tokitou, or Muichirō Tokitō, is a major supporting character in the Demon Slayer: Kimetsu no Yaiba. He is a Demon Slayer, obviously, and the current Mist Hashira. He appears as a short, muscular young man of light complexion and an air-headed individual. He is constantly seen wandering off in his thought and appears to be apathetic.

(Fun fact: No. 2- Muichiro, and Yuichiro, are the descendants of Upper Rank 1 Demon, Kokushibo)

The name ‘Gyokko’ literally means ‘jade-pot’ in Japanese and Chinese! Gyokko is the Upper Moon 5 and the most hideous-looking demon. Gyokko, in the Swordsmith Village arc, is the secondary antagonist. His physical appearance is very unique. Guess the ‘demon’ name serves him right!

He is a pale white, abstracted, and grotesque humanoid figure with scales all over his body. Gyokko is a self-proclaimed ‘artist’ with a sadistic streak; and is arrogant and short-fused, especially when people didn’t recognize his art!

Swordsmith Village arc, manga chapters from 100 to 127, is where the two fight. ‘The two’ here is Muichirō Tokitō and Gyokko. As Tanjiro visits the Swordsmith Village, he meets Muichiro. The two have a chat in chapter 106 when an Upper Moon Demon (Hantengu) enters the room, and both go into fight stances (fight mode) without wasting a single second.

In chapter 105, Gyokko appears and is seen eating one of the swordsmiths; the swordsmith was sucked in into the pot. Hantengu ambushed the room Tanjiro and Muichiro were, sending Muichiro far away from them. For a detailed description, when Muichiro cut Hantengu’s head, his flying head grew a body, and the body grew a head! As amazing as it may sound, they had names too- Sekido and Karaku. Muichiro landed a blow on Karaku but was instead sent flying to the forest.

Muichiro then witnessed a kid fighting against a demon. But as apathetic as he is, Muichiro will likely ignore him. But Muichiro remembered Tanjiro’s words and slew the demon, helping the kid instead. The demon was a summon of the main demon, so it was easily killed by the Mist Pillar.

Muichiro’s blade was chipped, and just when he was about to get his new blade, Gyokko appeared. As mentioned already, Gyokko was a self-proclaimed ‘artist,’ so he even asked Muichiro and others to look at his artwork before he could kill them! His artwork consisted of all those persons who were recently eaten. Gross! As cool as it may sound, manga readers got goosebumps when they read what Muichiro said- “Hey. Cut it out fuckface.”

Gyokko can move from pot to pot. Quite a handy demon indeed! As Muichiro and Gyokko were in a continuous, intense fight, it seemed like Muichiro had some memories come back. Gyokko’s needles filled with poison and his Blood Demon Technique: “Water Basin of Hell” wounded Muichiro fatally. Just when Muichiro was about to give up, give up on his life, the kid from before came to save him. Even though he wasn’t able to help get him out, he did help Muichiro come back to his senses. With the help of Breath of Mist Second Form: Layered Mist, Muichiro was able to come out of the bubble-like trap.

Being one of the chosen ones, Muichiro went on to kill Gyokko. Kanamori-san made a sword for Muichiro, which he can now use in his fight. When Gyokko was cornered, he showed his true self, i.e, his true form. Muichiro’s Breath of Mist Seventh Form: HAZE was the last form he had to use before cutting off the demon’s head.

As the whole area was covered in mist, Gyokko was unable to follow Muichiro’s steps. “Hey, you. Yeah, you. Where did you get the idea that you were the only one not being serious?” And with that cool line, Muichiro smoothly cuts off Gyokko’s head. Just with his raw power, Muichiro defeated Gyokko.

What Happened in the Jennie and Jisoo Vlog?