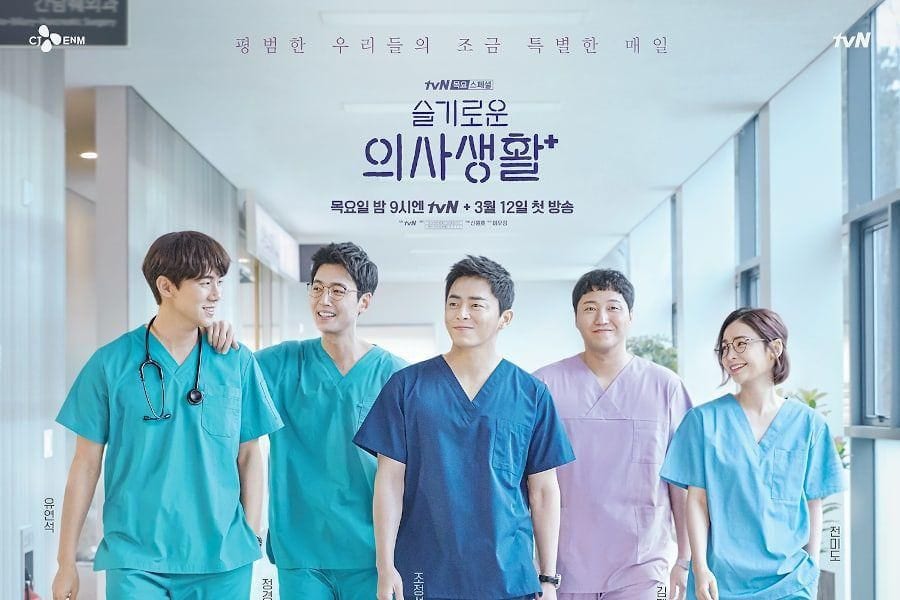 Medical genre Korean dramas are intense to watch as it depicts life and death situations in the doctor’s hands. Hospital Playlist is one such drama that is still a fan favourite among many viewers. The drama has also become one of the highest-rated Korean drama in the history of the nation after streaming its twelve episodes. Netflix acquired the international streaming rights for the show. Now, Hospital Playlist is returning for season two after a huge success for its first season. The renewal decision for the series was of the original broadcaster, tVN itself. So, the favourite five doctors will get seen again on the on-screen soon.

Korean Drama, Hospital Playlist takes place in the Yulje Medical Center. The leading characters are the five doctors that have been friends since 1999. They entered medical school at the same time and also works together. The group of doctors also forms a band and is interested in music very much. Moreover, they deal with life and death situations at the hospital all the time. One life is born at one instance, while another life may go away at the same time. Now let’s know in details all the Hospital Playlist Season 2 and when it is releasing along with a glimpse of the first season.

Hospital Playlist is simply an amazing drama. As the name suggests, one can already guess the basis of the storyline for the series. The twelve episodes depict the friendship of the five doctors besides unfolding their relationships and lives. It focuses on the five doctors’ heartwarming dedications and their different techniques for dealing with the patients. The storyline revolves around five people maintaining their tight bond ever since after they became friends in college. They may not have the same personality. However, there three things in common in between them. They are passionate about medicines, determination for patient’s curing, and music lover.

Also Read: How To Watch The Korean Drama Navillera Online?

The five leading characters, Lee Ik-Jun, Chae Song-Hwa, Kim Jun-Wan, Ahn Jeong-Won, and Yang Seok-Hyeong has specializations in different fields. Lee Ik-Jun is a liver transplant specializing gastric surgeon. Chae Song-Hwa is a brain doctor with good talents. Kim Jun-Wan is a talented cardiologist. Ahn Jeong-Won is a paediatric surgeon, and Yang Seok-Hyeong is an obstetrician. The team cares for each other. They cheer up and are present for each other when things turn ugly during the surgeries and patient check-ups. The team even make time for relaxing and spending time with each other even after having a hectic and busy schedule. They held band sessions when they are not busy at night sometimes.

The touching and natural plotline of the Hospital Playlist stands out from the rest of the medical dramas. There are several secondary characters introduced in the first few episodes. It may seem confusing. However, everything gets resolved as the drama premieres more episodes. Moreover, the warm friendships between the five friends are commendable and warm. They have been friends for a long period and even works at the same place. It is not always easy for all friends to walk on the same path together.

Hospital Playlist Season 2 official release date is June 17, 2021, on the tVN original network at 9 p.m. KST or 8 p.m. The announcement and confirmation for the official release date were made on April 15, 2021. Last Thursday did bring a lot of good news to the people. Hospital Playlist Season 2 will consist of twelve episodes, just like its previous seasons. The series will also be available on Netflix for international streaming. The other name for the drama is Wise Doctor Life, Hospital Playlist+, Seulkirowoon Uisasaenghwal, Seulgiroun euisasaenghal, Doctor Playbook, Secret Doctor’s Life, Smart Doctor Living, and A Wise Doctor’s Life.

Hospital Playlist Season 2 will continue from Season 1’s finale. There will be even more depth and warmth in the everyday simple stories. The upcoming season will be more enjoyable and fun than the prior one. Season 2 will also portray Lee Ik Jun and Chae Song Hwa’s relationship. Season 1 ended with the confession of Lee Ik Jun. However, Chae Song Hwa is yet to give him any answer. Lee Ik Jun also gives her some time to think before he returns from Spain. There will be many changes in the relationships with someone being long distance while the other being blossoming.