The cast members of the South Korean drama,  Hospital Playlist feature on the posters of a spin-off of the variety show Three Meals A Day. Here, we shall discuss this greatest news which will surely bring you happiness. What is the name of the variety show? What’s the show all about? When will the show start airing? We shall discuss everything in detail. If you have watched the drama, Hospital Playlist, you will surely find it more interesting. Different teasers have been released and the fans are very excited to watch their variety show. The first teaser was released on 16 September 2021 and it accumulated a large number of fans to date.

According to the tvN network, the five stars from Hospital Playlist have been featured on the posters of a new variety show. We shall discuss the posters and the teasers in a while. Just like the Korean dramas, these days, Korean food has also become famous globally. Since the show is filmed in South Korea, it is believed the cooked dishes are also Korean. After knowing things about dishes, you must have some assumptions regarding the theme and the purpose of the show. Don’t you think, it will be very interesting to see your favorite actors from Hospital Playlist cook tempting dishes? Now, you must be more excited to get the purpose revealed. Let’s get deeper into this article to know more.

Hospital Playlist Cast Features on the posters of a spin-off of Three Meals A Day: Mountain Village Playlist

With the cast of Hospital Playlist, we mean the five “99s” (as they are known in the drama itself)- Jo Jung Suk, Jeon Mi Do, Jung Kyung Ho, Yoo Yeon Seok, and Kim Dae Myung. They have been featured on the posters of the upcoming variety show “Mountain Village Playlist”. It’s a spin-off of another variety show called Three Meals A Day. This has been confirmed by the tvN network. 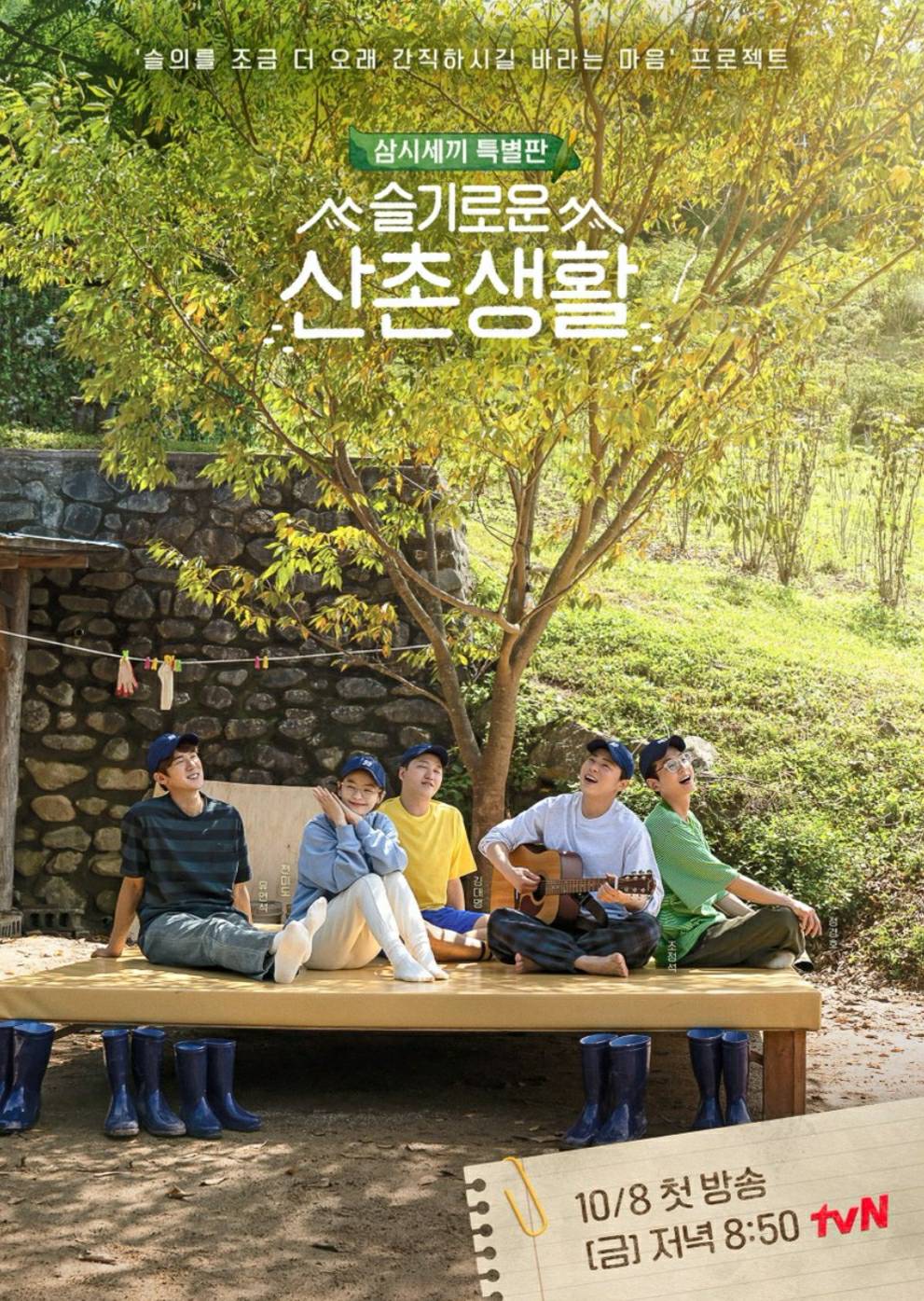 Hospital Playlist Cast featured on the poster of Mountain Village Playlist, which is a spin-off of the variety show Three Meals A Day

In the above poster, we can see Jo Jung Suk playing the guitar. Along with the other members, we can also see Jung Kyung Ho sing along with Jo Jung Suk. 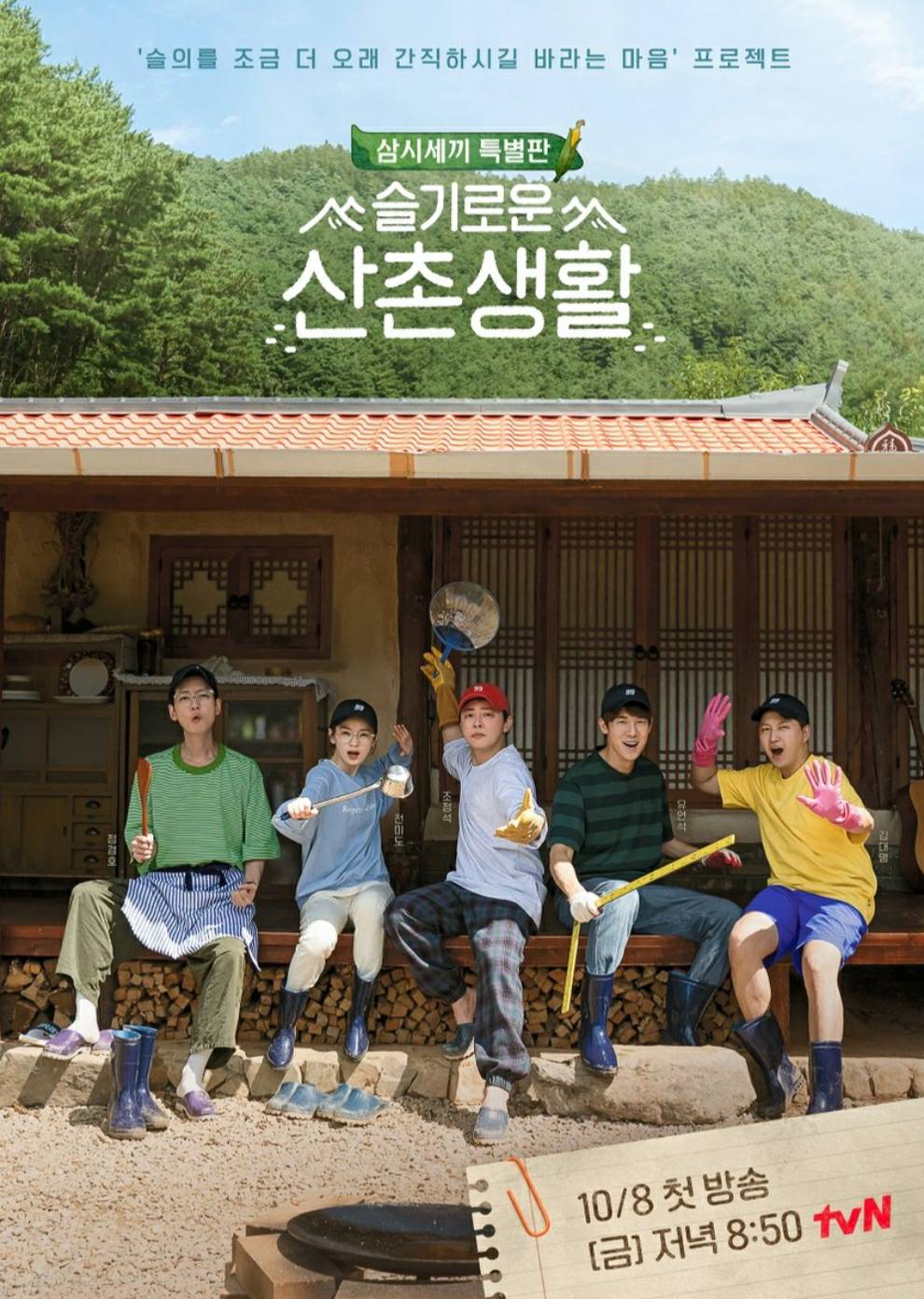 The five 99s on the poster of Mountain Village Playlist

This poster is revealing the strange but lovely chemistry among the five 99s. We can see each of them posing with several kitchen utensils in hand in some funny ways. Both the posters have the same caption which reads- ” A project to keep Hospital Playlist in our hearts for a little longer. “

Even the teasers of Mountain Village Playlist have been released. In the teaser, we can find them harvesting apples, turnips, wash dishes. Also, we see them struggling with rainfall to make the fire and start cooking their dishes.

Following is another teaser of the same show.

Mountain Village Playlist is set to air on 8 October 2021 at 8:50 p.m KST on tvN. Each episode will run for 60 minutes. Till now, it is set to have 5 episodes. It is not known whether it is going to extend further. When it comes to the theme and purpose, it’s quite similar to the old ones, that is Three Meals A Day. The celebrities, (here the five 99s) live in a scheduled rented house in the countryside. Their job is to cook dishes or meals for themselves. In short, it’s a television cook show where you can see your favorites five stars from Hospital Playlist. The show has already started gathering high expectations from fans and followers.

Until this television show, Mountain Village Playlist arrives, you may watch the drama Hospital Playlist on Netflix. To date, the drama has released its two seasons and both of them are exclusively available on the above-mentioned platform. You will enjoy this show more if you complete watching their drama before. For the fall of their upcoming television variety show, you need to wait for some more days!

Also read: What To Expect From Hospital Playlist Season 2?