‘Hippopotamus’ Ending Explained: How Does The Indie Film End?

A movie with two characters, Hippopotamus gives the audience something fresh and intriguing to watch. 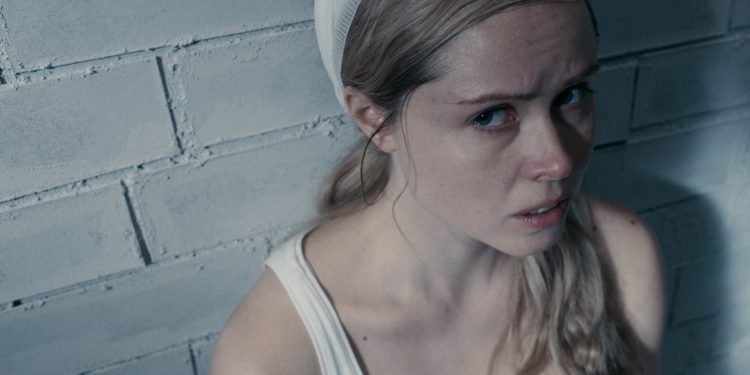 A still from Hippopotamus

The audience is keen to know the ending of an indie film that came out in 2018 called Hippopotamus. It is a thriller drama film with an intriguing ending. Edward A. Palmer wrote and directed the film. Many people have been searching for Hippopotamus movie ending explanations since the film’s debut, as it has left spectators perplexed as to what transpired at the film’s climax.

The movie is about two characters, Ruby and Tom. Ruby does not have a clear memory as to how she ended up in a room with Tom. The entire film was shot in a single room. We, as an audience, are as confused and perplexed as Ruby. We are left with many questions as the movie proceeds, how did Ruby end up in that room? What cost her memory? Who is Tom? How does he know her?

The low-budget independent film was originally screened at film festivals in 2018. It had an estimated £5,000 budget. The film is all about memory loss and manipulation, and it’s reasonable to conclude that Hippopotamus’ ending has to be explained. Let us now dive into the storyline and ending of Hippopotamus!

A Movie With Only Two Characters?

“Hippopotamus” is a gripping thriller about playing mind games with a person in order to stay alive. The protagonist is being held captive in a room with only a mattress, a sink, and a toilet. It’s unsettling and disturbing at the same time as being intriguing. The feeling of curiosity as to what will happen next always stays with the audience.

There is only one room, two characters, and one goal. It doesn’t get much more basic in terms of plot, and it keeps the audience on edge, as they don’t know who to trust as the story unfolds and reveals the objectives of both of the persons involved. What is going to happen next? How does it end?

Ruby wakes up abruptly at the beginning of the film in this room. She is unable to walk. Her knee tendons have been cut, and she has been bandaged. Somewhere in the room, an eerie voice speaks. His name is subsequently revealed to be Tom. He informs Ruby that he has kidnapped her until she falls in love with him. He gives her medications whenever she starts to reminisce about things that make her lose faith in him. Surprisingly, as Ruby progresses, they begin to form a bond.

As the storyline progresses, the audience is left wondering what will happen next. Each character has problems. Tom, at times, portrays that he isn’t nuts. Without saying anything else, this film has turns, and the creators toy with our minds in the same way that Tom tries to play with Ruby’s. It’s pitch black, it’s fascinating, and it’s gripping.

Also Read: ‘Lost in Space’ Season 3 Ending Explained: What Happens to SAR and Will?

How The Movie Has Been Shot In Only One Room With Two Characters: Characters Explained!

One of the things that truly benefited this piece of art was the hard work of the actors and their portrayal of the roles. They had chemistry together, which contributed to the film’s overall intensity. These two characters seem to have gone to tremendous measures to give a convincing performance. The impact of their performance is so big that the viewers can’t see anyone else playing those roles. The two actors are so invested in their characters.

Another factor that contributed to the film’s high level of tension was the usage of only one setting, the room. The central area where we get to see these two engage with one another is interesting and intriguing. There’s only so much one can accomplish in one sitting, yet the filmmakers outdid themselves and made it very long. This room becomes a character in its own right, one we become quite comfortable with. You never know where the camera will be positioned or what will happen next.

We gradually learn more about Ruby’s captivity in the plain basement, and her long-standing love with Tom as the film progresses. More of Ruby’s memory is brought up through the use of triggers, such as books or a specific meal. We see glimpses of a past relationship Ruby shared with Tom before the captivity took place. It seems that the two have known each other since childhood. They were together for a while before going to different paths for universities.

Ruby tries to put the pieces together. She finds a book scribbled with burnt matches she took from Tom. This creates more doubt. She soon realizes that her legs were not injured before being held captive, even though that is what Tom had mentioned. The notes warn her not to trust Tom and advise her to cooperate with his attempts to rehabilitate her.

Tom had mentioned Ruby was beaten by a friend at university, and he was the one who defended her. He said Ruby developed amnesia as a result of the trauma. Tom claims he took Ruby to a farm on an abandoned island in the hopes of rekindling her memory and love for him.

Does Ruby Manage To Escape?

Near the ending of Hippopotamus, Ruby is seen playing along with Tom and doing what he wants. She informs him that they are fine. Tom believes he has finally fixed Ruby. Surprisingly, with a mind-blowing twist, Ruby throws an enraged attack on Tom and flees the scene. She passes out unconsciously while trying to escape.

Ruby is in a hospital bed in the ending scene, which cuts to a hospital room. The doctor informs her that the procedure was a success and that he will inform her partner. It turns out the doctor is talking about Tom! When Tom emerges from the hospital, he walks with a limp and appears to be wearing bandages around his neck. He makes it out alive. He survives the attack. Tom’s final look towards the camera is ominous. We can hear a voice, presumably Tom saying, “why don’t you wake up?” near the end of the credits. It leaves the audience knowing that he’s growing frantic to finally fix Ruby.

Also Read: Christmas in The Heartland Ending Explained: Who Wins The Beauty Pageant?