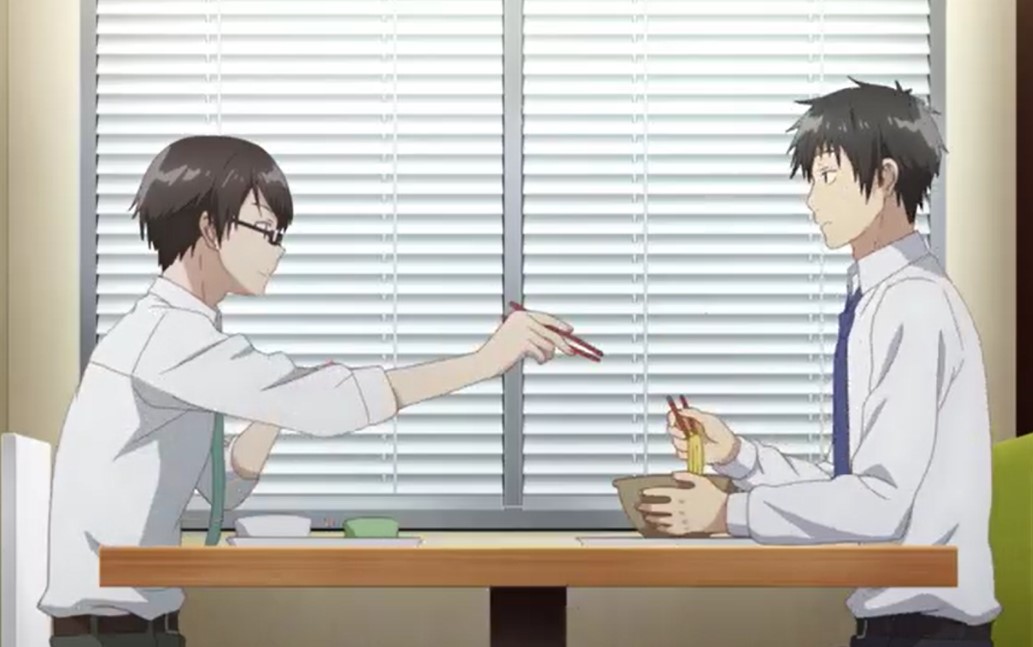 Yoshida invited a girl on a date, and she thanks him for doing that. But the girl was the only one who was eating. She comments that the food is nice, and Yoshida looks at how hot she is. Yoshida was shaking and wanted to tell the girls something. He addressed her as Gotou. Yoshida gets hold of himself and asks Gotou if she can come to his place after this. Gotou apologizes and told Yoshida that she is seeing someone. That was the day Yoshida’s heart got broken.

He has been in love with Gotou for the past five years, and he never proposed to her until the day he was rejected. Yoshida thinks that was the day his love story has ended. Five years have already passed, and Yoshida has not gotten over Gotou. He makes a friend and drinks beer every day, but he was not himself. Yoshida keeps on embarrassing himself with the stuff that he says. One day when he is drinking with his friend at the pub. Yoshida shouts that now he has a man realizing that a woman has rejected him.

Yoshida continues to shout, and his friend told him to stop it. He told everyone who is in the club not to mind Yoshida; he is a little drunk. Yoshida’s friend realizes that Yoshida can’t accept that he is rejected. Yoshida comments that Gotou has been seeing someone for five years. But he has been in love with her for five years, and he feels that he is betrayed. He continued to drink more beer and said that Gotou had stolen his heart and she will never return it. Yoshida shouts to the waiter to give him more glass of beer.

Yoshida’s friend told him that he is drinking too much, and he replies that tomorrow they are off. Yoshida’s friend looks at his phone and comments that he is heading home before the trains shut down. He realizes that his wife is waiting for him, and he pty Yoshida that he is a single and a v-man. Later they head home, and Yoshida is still worried about Gotou.

On his way home, he met with s student and wonders why she is alone at this hour. Yoshida approaches the girl and asking why she is out at this hour, and told her to go home. The girl replies that there are no trains at this hour. He asks her what she will do, and she asks him to stay at his place. Yoshida asks what kind of teenage girl wants to stay at the place of a man she never met. The girl replies that she has no place to go tonight. Yoshida told her to head to the station to give her a place to sleep at karaoke or internet cafe.

They arrive at Yoshida’s house, and the girl thought that he stays with someone. But she finds that Yoshida stays alone. Yoshida vowed that he would never touch the teenage girl even though he is a single man. The girl took off her top and showed Yoshida her chest. She asks him he doesn’t want to do her. Yoshida told her that he is not interested in teenage girls. She asks him what to do, and he replies that a miso soup. The girl is surprised, and Yoshida said miso soap made by that woman.

The girl realizes that Yoshida has been rejected by the woman he loves. She decided to respect his decision and stay with Yoshida without doing anything with him.  Later she reveals that she is Sayu and the two started to get along. Yoshida finds it hard to chase Sayu away. After few weeks, Sayu started to fall for Yoshida and realizes that she fell in love the first day she saw him.

HIGEHIRO Episode 2 will air on Monday, 12 April 2021, at 10:30 PM JST. You can watch HIGEHIRO’s latest episode online on  Crunchyroll and ANIPLUS.