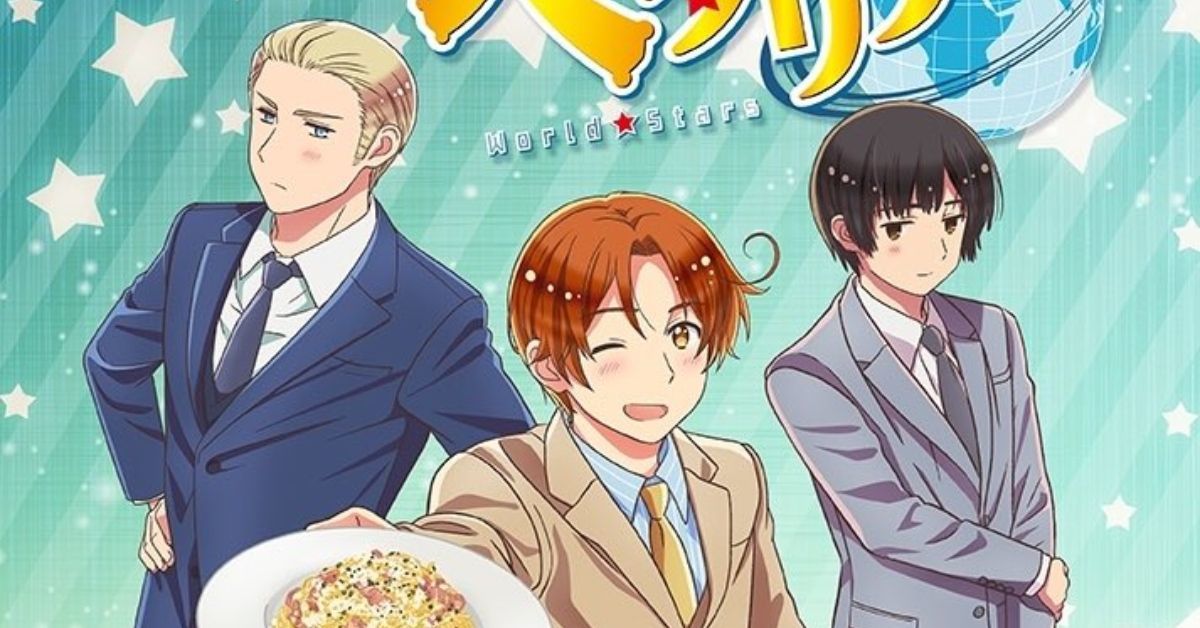 Promotional Picture For Hetalia Season 7 as in Hetalia World Stars

It’s been almost five years now but yes finally Hetalia Season 7 is officially happening. It’s right around the corner. Hetalia: Axis Powers is an anime that originally debuted in January of 2009. The anime originally comes from the webcomic Hetalia: Axis Powers. Hidekaz Himaruya created Hetalia: Axis Powers which was later published by Gentosha. The webcomic eventually got adapted as a manga in Shonen Jump+ and finally a fully-fledged anime series. The anime ran for a total of six seasons before wrapping up the initial run. Now, there is a talk in the air that Hetalia is returning in for a seventh consecutive season. So here we are taking a look at everything we know about it as of now.

Hetalia follows the presentation of political and historic events along with cultural references in a comical manner. Especially with characters personified as countries. So anyway let’s take a look at what the new season of Hetalia be about and when it is making its official return to the TV screens.

Also Read: Netflix To Launch 40 New Anime – What We Know

Hetalia Season 7 as in Hetalia World Wars is releasing on the 1st of April 2021 with the very first episode. The series will be returning to the web as the seventh season will stream on Funimation Officially. Funimation will stream Hetalia Season 7 in the United States, Canada, the United Kingdom, Ireland, Mexico, and Brazil. For the viewers in Australia and New Zealand, Animelab will serve as the source to watch Hetalia Season 7. Similarly, the viewers in France, Germany, Russia, and the other Scandinavian countries can watch the show on Wakanim.

A Twitter handle originally announced that Himaruya is working on a secret theme in Shueisha’s Jump SQ. It is speculated to be for Hetalia Season 7. An image coming from a Japanese Magazin most probably Jump comics portrays the show is aiming for a seventh season release in 2021. Only an official confirmation is yet to be made.

Read:   Preview: The Hidden Dungeon Only I Can Enter Episode 3

What To Expect From Hetalia Season 7?

Hetalia Season 7 and the image released aims that the series will be adapting Hetalia World Stars of the web-comic. Also note, the series will continue where it left off in 2015 with a seventh consecutive season. According to the official synopsis of Hetalia World Stars, the series talks about some strange people. The ones who are short that despair for several days and the long ones disappearing for 100 years. The name and personality of these people are changed completely and suddenly come up in someone’s unexpected idea.

Also Read: Will There Be Kemono Jihen Season 2?

The Returning Cast For Hetalia Season 7

Hetalia Season 7 as in Hetalia World Stars will see a number of familiar voices and characters returning to reprise their roles. Let’s start off with Italy who will be voiced by Daisuke Namikawa. Joined by  Hiroki Yasumoto as the voice of Germany, Hiroki Takahashi as the voice of Japan, Katsuyuki Konishi as the voice of America, and Noriaki Sugiyama as England. Joining the cast also includes other names starting with Masaya Onosaka as France. Joining Masaya Onasaka is Yasuhiro Takato as Russia, and Yuki Kaida as China.

A number of names that worked on the previous seasons of Hetalia will be returning to make their presence felt for a seventh consecutive season. Hiroshi Watanabe, Kazuyuki Fudeyasu, and Mariko Oka will all join in a number of roles in the creation of Hetalia Season 7. They will serve as directors, series script supervisors, and character designers. The anime will be created by joining hands with Studio DEEN which is also returning to make its presence felt for Hetalia Season 7.

Also Read: You Are Waiting For ‘Attack On Titan Season 4 Part 2’, And It Is Not Coming Anytime Soon