Here Are Some Of The Craziest K-pop Ships On The Internet! 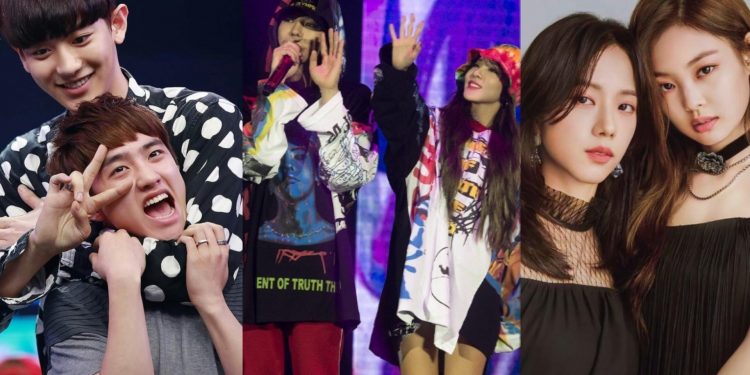 K-pop fans are of the most significant assets to the K-pop industry. Without their fans, the idols have nothing to get inspired from or work for. Everything an idol does, it’s done with the fans being kept in their mind, from the music concept to the touching lyrics and amazing dance choreographies. In exchange, the fans do their part too. They go on promoting their favorite idols and show their love, from making fan arts to writing fanfictions and making video edits. Fans have mastered all the arts available out there to show their love for idols. One thing the fans love to do is ship their favorite k-pop idols and imagine how the two would look together. And sometimes, the craziest k-pop idol ships get out of hand.

Fandoms and stans know no limits about the idols they ship together. Spending their time in writing stories or making arts and edits, fans go on to sexualize their favorite idols. This might seem fun and devoted fan thing from a distance, but it is actually very problematic. These ships have caused unwanted attention, breakups, and tension between artists. While giving rise to questionable labels as fans continue to glorify them in their ‘art.,’ So Here Are Some Of The Most Craziest K-pop Ships Supported By The Fans!

No doubt that BTS and Blackpink are literally one of the biggest k-pop bands out there in the world. And even though the members of BTS and Blackpink have no connection with each other in real life. Fans seem to be crossing limits by shipping the members together. And even the BTS Army and the Blinks agree that the fans who ship the two groups together are delusional. While at a thought, ships like ‘Lizkook’ or ‘Jirose’ or ‘Taennie’ look cute. The edits made by the fans on the ships are not that innocent. The fanfics and picture edits found on the internet sexualize and disrespects both groups.

‘Hyunjin X Felix’ or ‘Hyunlix’ is the most annoying ship to exist in the fandom, according to the fans. Youtube is filled with analysis videos of Hyunlix moments showing how Hyunjin and Felix are together. While two are just members of the same group, ‘Stray Kids’ and have stunning visuals. Even their simplest interaction is often ‘intense’ by the Hyunlix shippers. As the ‘analysis’ shows that apparently, ‘their glances towards each other is very different from other ships.’ And that there’s a lot of “sexual tension” or “jealousy” moments in the videos. Some fans even think that the company is keeping the two ‘lovers’ apart.

K-pop stans shipping their favorite maknaes together is concerning and creepy as some maknaes are still underage. One of the ships is the ‘Yunkook’ shippers. Shipping Jungkook and Itzy’s Yuna together, while both of them are the youngest in their group. Yuna is a minor, while Jungkook is in his 20s, making the ship creepy and illegal. Ships like TXT X Blackpink are also creepy and crazy for the same reasons.

This has to be one of the craziest k-pop ships out there. The ‘Josh X Nayeon’ ship caught the attention of many fans, and the question about who is ‘Josh’ is beginning to rise. It didn’t take long for the fans to find out that Josh is Nayeon’s stalker. Josh from Germany started to ship himself with Twice’s Nayeon. He even followed her to South Korea on the flight and got into a fight with her managers. Currently, he writes updates on his Instagram, begging Nayeon to tell him if he should come to South Korea or wait for her. Fans have been trying to report him for stalking by tagging JYP Entertainment under his posts. Hoping that the company would take some action.

To Become A Real Heroine! The Unpopular Girl and the Secret Task Release Date & Streaming Details