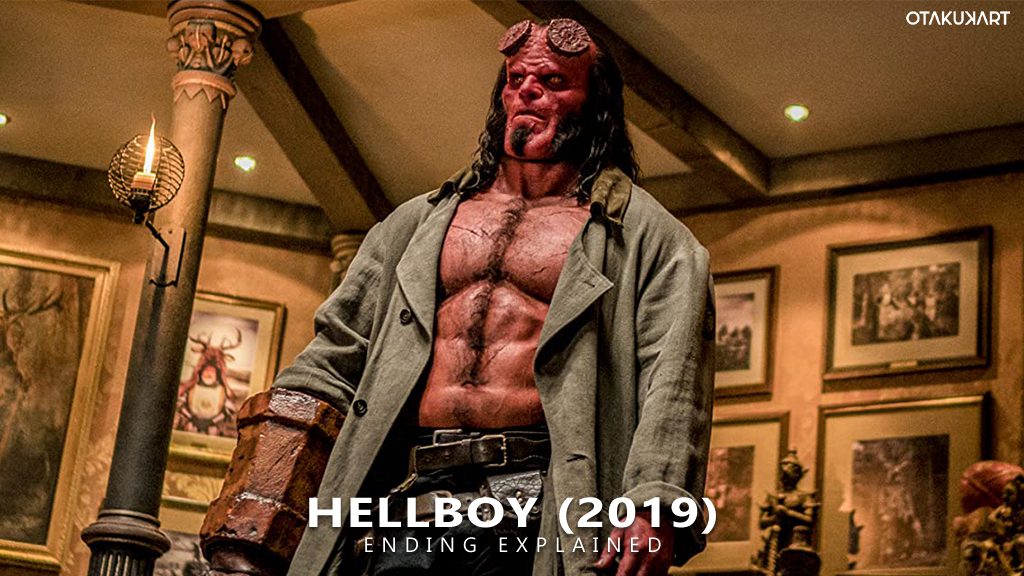 After over a decade later, a new Hellboy movie came out, but the Hellboy (2019) ending left many fans with lots of questions. Instead of being a sequel to the 2008 movie Hellboy II: The Golden Army, the 2019 Hellboy movie is an R-rated reboot. The release of a new Hellboy movie would be something that fans were waiting for a long time. Neil Marshall directed this 2019 movie instead of Guillermo del Toro, who directed the original two movies. Initially, del Toro was supposed to make the third installment, but when he was not given the role of director-writer like the past two films, he moved out from the project. Thus, the studio took the step of making a reboot instead of a sequel. The movie features the Stranger Things star David Harbour as the Hellboy instead of Ron Perlman.

This movie is a reboot of the Hellboy franchise, and it revolves around a man who is half-man and half-demon, working for B.R.P.D. to fight against supernatural and dark forces. However, this new installment failed to match the level of its predecessors. The audience and critics gave negative reviews for its directing and writing. But the audience praised the performance of the actors. ‘Hellboy’ presents lots of sequences throughout the movie, which are full of gore sequences. However, the plot of the latest Hellboy’ still intrigued many fans, but the Hellboy (2019) ending left the fans most confused. Thus, we will explain Hellboy (2019) ending in this article. Further, beware of reading this article as it will contain many spoilers. To avoid spoilers, you can watch the movie on Amazon Prime Video.

What Happens In The Hellboy Reboot?

The movie begins with Blood Queen Vivienne Nimue, who terrorized the entire of England by unleashing a life-threatening plague. However, King Arthur ended the Blood Queen. He separated Nimue into pieces and seals each part away from the others. The movie then shifts to the present day, where Hellboy, a half-man and half-demon, works for B.P.R.D., an organization that fights against supernatural beings and evil forces. The B.R.P.D. Leader Trevor Bruttenholm, who adopted Hellboy instead of killing him, assigns Hellboy to take down three giants roaming in Great Britain. Meanwhile, a witch named Baba Yaga advises a pig-like fairy Gruagach to revive Nimue to get his revenge against Hellboy.

Hellboy meets Alice Morgan, whom Hellboy protected when she was young. Further, he saved her from none other than Gruagach, who could change his form and took Alice’s place to live a human life. But unable to live a human life because of Hellboy, he swore to take revenge against him. Then an M11 agent, Ben Daimio, informs them about the revival of Nimue. The trio visits the place where the Blood Queens last past was stored. But they discover Gruagach killed everyone protecting that last piece and fled with that piece. Hellboy and the gang further get to know that Nimue plans to use Hellboy to wreak havoc on earth.

The M11 agent takes everyone to the headquarters. There, Hellboy gets to know that his foster father adopted him instead of killing him. But Hellboy doesn’t like what Bruttenholm did, and after an argument, he leaves. Meanwhile, Daimio gains a special bullet that can kill Hellboy, but he does this in secrecy. Meanwhile, Hellboy ends up at Baba Yaga’s place after leaving the headquarters. Baba Yaga informs her about the Nimue’s location but asks for his devilish right-eye as payment. However, Hellboy escapes Baba Yaga’s place with both his eyes safe. But because of the trickery, Baba Yaga curses him he will lose a loved one. Meanwhile, Daimio also reveals him being a were-jaguar capable of changing into a jaguar at will.

The trio goes to Nimue’s location to confront the Blood Queen. But the evil Queen overpowers the trio and also poisons Alice before fleeing from there. After the defeat, the trio visits the place of the legendary wizard, Merlin, who cures Alice. But Merlin puts Alice and Daimio to sleep soon. He reveals the truth about Hellboy’s real name is Anung Un Rama, and his mother was a descendant of King Arthur. Merlin also offers Hellboy the legendary sword Excalibur. But Hellboy refuses after having a vision about him causing an apocalypse. After the rejection, Merlin perishes as he has no more energy left within him.

Also Read: ‘Once We Get Married’ Ending: What Happened To Xi Xi & Si Chen?

What Was The Hellboy Ending?

Hellboy, along with Alice and Daimio, visits St Paul’s Cathedral to face the Blood Queen once again. There, Hellboy, along with Daimio in his jaguar form, fights against Gruagach. But the Blood Queen betrays the pig-like fairy and kills him. She also takes Hellboy to King Arthur’s tomb there to retrieve the Excalibur. But seeing Hellboy refusing to take the sword, Nimue kills Trevor Bruttenholm in front of him. Enraged by this act, Hellboy takes out the legendary sword and wreaks havoc in his anger. But Alice uses her power to bring forth Bruttenholm’s spirit, who calms down enraged Hellboy. The B.R.P.D superhero comes back to his senses and uses the sword again, cut down the Blood Queen, and seals her again. Meanwhile, Daimio drops the Hellboy-killing bullet and joins his party along with Alice.

The Hellboy (2019) ending battle is kinda metaphorical. As we can think of the entire sequence as the fight between good and bad that takes place in every human. Every person has a good man and an evil demon inside them. It’s up to that person about which side they want to pick. However, the climax is not the end of the movie. Because before rolling the end credit, we see Hellboy along with Daimio and Alice visiting Oannes Society in Serbia. There, they discover a being resting in a special tank and that being had webbed fingers. Those who read the comics or saw the previous films know that it is none other than Hellboy’s best buddy, Abe Sapien.

The movie also has a mid-credit scene where Hellboy was drinking in sorrow near his father’s grave. But soon, the spirit of Lobster Johnson, Hellboy’s inspiration, appears and consoles Hellboy. Johnson was an elite B.R.P.D. Agent like Hellboy, who worked during World War II. But Johnson has his own rules and loves to leave his Lobster Claw mark on his enemies. The movie also has an end-credit scene where Baba Yaga asks an unseen figure to murder Hellboy and get his devilish eye to her, and in return, she will help the mysterious figure die. There are speculations that the unseen figure is Koschei the Deathless, who is an “immortal” assassin. In comics, he and Hellboy are great enemies and fight each other countless times. However, we would never get to know who that unseen figure was because there won’t be any sequel to this Hellboy reboot.

Also Read: Cobra Kai Ending Explained: What Happened At The End of Season 3?