From new beginnings with shows like Peacemaker to an event full of nostalgia featuring the team of Harry Potter, here is everything coming to HBO Max In January of 2022. 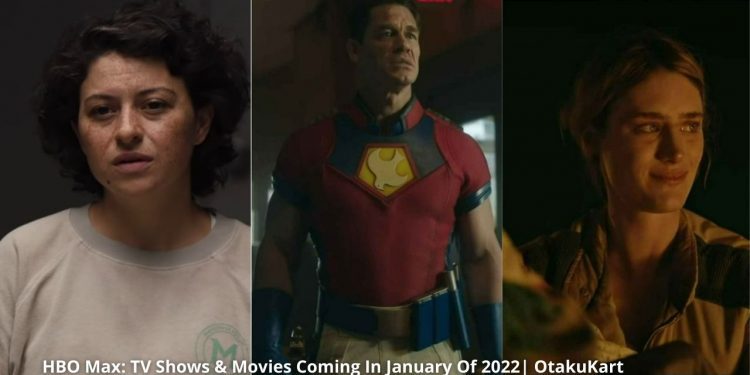 From The Trailers Of Search Party Season 5, Peacemaker and Station Eleven

HBO Max continues to expand its library as it brings the Warner Bros. catalog slowly and steadily onto the platform. Similarly, the force of MAX originals has continued with the quality as well. Take it from T.V. shows and movies that are helming the January of 2022 of HBO Max, which comes with nostalgia as well original content. The list is long, but here we have also put on a spotlight on some of the T.V. shows, events, and documentaries that may need a special look.

For starters, the month is opening up with a nostalgia vibe. Something Hollywood has been making use of a lot lately. HBO Max brings it by celebrating Harry Potter’s 20th Anniversary. Moving on, the platform is also celebrating the football legend Diego Maradona with a show that documents the legend’s final year. Also, let’s not forget Station Eleven is preparing itself for its finale while new shows such as Search Party are premiering for the platform. So keeping the same in mind, first, here is the list of our favorite T.V. shows, movies, and events coming to HBO Max in January Of 2022.

It seems like the 90s, and 2000s kids are having the time of their life. Carrying the notion of nostalgia, the team of Harry Potter celebrates magic on the Anniversary of the first film. The reunion event sees some of the major cast names, such as Daniel Radcliffe, Emma Watson, and Rupert Grint, returning to Hogwarts.

Harry Potter 20th Anniversary: Return to Hogwarts will exclusively stream on HBO Max. The event sees the three major cast members and all the supporting cast joining and joining on some of the iconic locations of the show. They talk about the vivid memories that have stayed with them after all these years since the journey first began in the early 2000s.

The satirical dark comedy-thriller Search Party coming from Sarah-Violet Bliss, Charles Rogers, and Michael Showalter is back with the fifth season. The fifth season will wrap up the show once and for all. The official details and trailer mark the return of Dory after a near-death experience. It also sees a completely new Dory that intrigues many. The brand new season sees her forming business relations with tech billionaire Tunnel Quinn. Joining her in this new venture are Portia, Elliott, and Drew.

Max Original Documentary, Diego, The Last Goodbye takes us into the last year in the life of Diego Maradona. Friends, family, and peers of one of the greatest players in the history of football join in to tell the story about his deep humanity and career. The show will take a look at the  Maradonian funeral organized during the covid times that saw everyone bidding their goodbyes to the legendary player.

My Mom, Your Dad is a brand new reality dating series that sees a group of single parents moving in together. Meanwhile, behind the scenes, they don’t know that their college-aged kids will be pulling some strings. They will try to spark a fire between them as they try to give them a second chance at love. The kids will be observing every move they make through hidden cameras and manipulations.

Jennifer O’Connell, EVP, Non-Fiction and Live-Action Family of HBO, states My Mom; Your Dad will be a hilarious and cringeworthy comedy. Haley Daniels and her father, Greg Daniels, have created the show that sees Emmy-nominated actress and standup comedian Yvonne Orji taking the stage to host the brand new Max Original reality show.

The first show from the D.C. Extended Universe joins the mix on HBO Max. While The Suicide Squad as a movie may have left HBO Max but this new spin-off show comes to the platform in January of 2022. Peacemaker follows the titular character, a.k.a. Christopher Smith telling the origin story of the character who is a merciless killer that can go to lengths when it comes to achieving peace.

Patrick Somerville takes inspiration from the novel of the same name to create Station Eleven, which will be wrapping up its run. The show began in mid-December, releasing two episodes every week. Originally, Station Eleven followed a story set twenty years into the future after the devastating flu started wiping out civilization.

A group of traveling performers who are one of the surviving ones continues to build the community back. They try to do so by keeping alive what they had. At the same time, they will be facing a violent cult led by a man who has connections with one of them.

The brand new HBO Max Orignal Series Astral Journey dives deep into two celebrities sharing the same zodiac sign. Each episode focuses on one of the 12 Zodiac signs and sees the celebrities on an astral journey to the past, present, and future. They are guided by Angélica and astrologers Paula Pires and Vítor diCastro.
Carol Albuquerque created the show that may drop all of its 12 episodes on the same day.

The new adventures of Looney Tunes characters such as Bugs Bunny, Tweety Bird, Porky Pig, Daffy Duck, and friends continue with a brand new fourth season. The reboot re-introduced the show and characters to the new young audience while the older ones relived the nostalgia and their days of watching the original show.

These were some of the major shows and movies we are looking forward to for HBO Max. The list doesn’t end here, though. Here is the list for the rest of the acquired and original TV Shows & Movies coming to HBO Max In January Of 2022:

Batman Beyond: The Return of the Joker

The Batman vs. Dracula

Batman: Death in the Family

Batman: Mask of the Phantasm

Batman: Mystery of the Batwoman

Batman: Soul of the Dragon

Batman: The Long Halloween, Part One

Batman: Under The Red Hood

Birds of Prey (And The Fantabulous Emancipation of One Harley Quinn)

A Cinderella Story: Once Upon a Song

The Curse of La Llorona

The Death of Superman

The Diary of a Teenage Girl

Empire of the Sun

The Eyes of Tammy Faye

The Friday After Next

Godzilla: King of the Monsters

Gone with the Wind

The Gospel According To Andre

The Hobbit: The Battle Of The Five Armies

The Hobbit: The Desolation of Smaug

Hobo With A Shotgun

House Party 4: Down To The Last Minute

John Dies At The End

Justice League vs. The Fatal Five

Legend Of The Guardians: The Owls Of Ga’Hoole

The Lord Of The Rings: The Return Of The King

The Lord Of The Rings: The Two Towers

Mutiny on the Bounty

The Pirates! Band of Misfits

Racer And The Jailbird

Reign of the Supermen

Roots: The Next Generation

Singin’ in the Rain

The Son of Kong

Superman IV: The Quest for Peace

Superman vs. The Elite

Teen Titans Go! To The Movies

A Time to Kill

What Ever Happened to Baby Jane?

Where The Wild Things Are

The Wizard of Oz

Joe Pera Talks With You Season 3

The Murder of Fred Hampton

​​Last Open Mic at the End of the World

On The Job, Max Original Mini-Series

Back On The Record with Bob Costas Season 2 Premiere