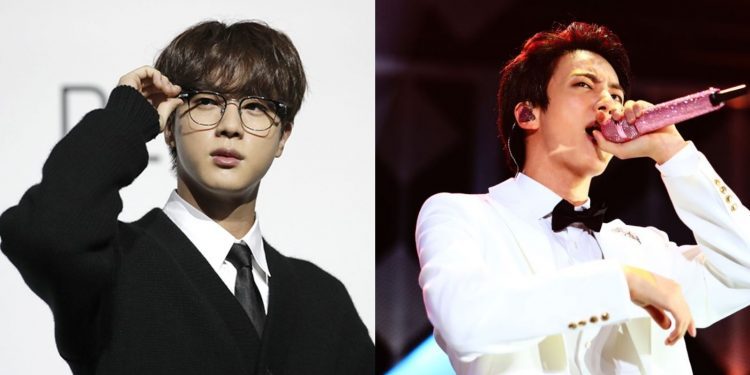 BTS’s Jin is turning 29 today. And, on his birthday, we would love to share the best songs and vocal moments from BTS Jin. It’s no doubt that Jin (Kim Seok Jin) has a healing, soulful, and deep voice. Besides delivering as the main vocalist in BTS’s discographies, Jin has also released singles still reigning on musical charts. From his voice to the lyrics penned down by Seok Jin, everything will teleport you to another world. And, it will teach you the importance of loving yourself.

The Epiphany we garner after listening to BTS’s Jin’s voice is no less than finding pure joy in the world. The eldest member of BTS truly knows how to appeal to people with his vocals and general nature. If you are a BTS Fan, you will understand that Jin did not have any experience or training in music. Howsoever, he worked day and night to become the MOON of the Armys. Jin is genuinely an exception: the high notes, the perfect visuals, and the best Hyung (elder brother).

BTS has millions of fans worldwide, no doubt. The septet- RM, Jin, Suga, J-Hope, Jimin, V, Jungkook- too have their personal fandoms. All BTS members frequently drop singles and special snippets to show love to the BTS Army. Seok Jin or Jin have been a part of the ritual too. With solo songs in BTS albums to popular Kdrama OSTs, his euphonious voice is doing its magic all over the place.

Hence, in the event of his 29 birthday, we are ready to share the list of BTS Jin’s best songs.

Epiphany- an experience of a sudden realization. The song, which was released as a part of BTS’ album, LOVE YOURSELF, holds a special place within the ARMYs. Jin sang the song with thousands of emotions, and they can be clearly witnessed in his perfect falsettos and well-written lyrics.

Epiphany is a song about realizing your ‘self-worth.’ He sings, “I’m the one I should love in this world,” as he is tired of living for someone else and now wants to focus on himself and his growth entirely. The MV for Epiphany is equally beautiful as we find his life getting filled with colors as soon as he decides to ‘Love Himself.’

Apart from the song playing on our devices, Jin has performed it several times on stage, live. Moreover, every time you listen to it, you fall in love with his voice. Thus, Epiphany has to be on the list of best songs by BTS’s Jin.

Moon released by Jin has another significant meaning and is also one of ARMYs favorite. Featuring on BTS’s hit album, Map Of The Soul: 7, Moon is entirely dedicated to the BTS ARMY as Jin sings about being the Moon and ARMY being the Earth. While serenading the fans in the song, Jin croons about how the Moon and Earth together keep going in life.

“To you, I am just a moon
Your little star that brightens your heart
You are my Earth
And all I see is you,” he chimes with his voice.

Unlike the other songs, Moon is comparatively a cheerful song, which will instantly make you dance to its beat. Jin’s love for the ARMY was reciprocated in the best way possible. After the song came out in August 2020, Moon topped no.1 on iTunes in 100 countries. This made Jin the only artist to achieve the title back then. Hence, you cannot ignore ‘Moon’ on BTS Jin’s best songs list.

Awake sits like a gem on BTS’s critically acclaimed album ‘Wings.’ The song is personal, peace transmitting, and filled with positivity. As we mentioned, Wings was BTS’ critically acclaimed and popular album, which also brought commercial success to the group. However, one of the reasons behind its success was the genre of the concept it was based on.

Even you fail and never stop trying in life is what Jin’s Awake is about. The lyrics of Awake will fill you with newfound hope for marching towards its dream, even if you did not garner any success. Jin mention in the song that at least all the trying will make him proud of himself in the future.

“I will be covered with wounds all over, ooh
But it’s my fate
It’s my fate
Still, I want to struggle and fight, ooh.”

Jin wrote Awake with BTS Guru, Bang Si Hyuk, fellow bandmate Nam Joon, and others. The short MV on Youtube encompassing the beauty of the song is still going strong. Watch it down below:

Last year, when Jin turned 28, he presented ARMY with Abyss as a surprise gift. Marking as one of his solo projects out of BTS albums, Abyss received love globally, and Kim Seok Jin was again praised for his silver voice. However, the meaning behind the song made us love Abyss even more.

As Jin loves to croon songs with deep meaning, Abyss was no less. Showcasing millions of heartfelt emotions, Abyss is a ballad describing the feeling of fading away like a black hole. Before releasing it two hours before his birthday, the eldest BTS member shared how he has had mixed feelings.

Furthermore, the lyrics mimic how Jin felt alone during that time and how the darker emotions made him pen down the beautiful song. ‘Abyss’ is defined as a song, which Jin wrote for himself.

Tonight was Jin’s first solo work, which was not associated with any of BTS’ albums. It was a new experience for ARMY and Jin, but it’s okay to say that ‘Tonight’ became one of their bests.

While Jin already has a deep connection with his fans, bandmates, and himself, he proved that he is more than just an incredible human being. The 29-year-old vocal king wrote Tonight for his pets- Jjanggu, Eomuk, Odeng. Music lovers don’t get to experience this type of classification for songs made for touching hearts.

In an interview, Jin shared that he primarily wrote the song for his pet, who passed away. His explanation made Tonight more relatable, and how the after-effects of losing someone feels. Even though Tonight was about Jin’s memories with his pet, many fans have praised the song and explained how it helped when they thought about their dear ones.

The song was released on BTS’ 2019 Festa. And, it cannot be missed on the list of Best songs from BTS Jin.

The recent addition to Jin’s works is Yours, which is his first OST for a Kdrama. Earlier, he sang ‘It’s definitely you’ with BTS member V (Kim Tae Hyung). However, Yours is entirely Jin’s magic, and it seems to be doing its work. Released not even a month ago for ongoing drama, Jirisan, Yours has achieved multiple milestones.

The song was released at the most crucial point in the drama. Also, it is painful yet beautiful, proving that it is Kim Seok Jin’s creation. Besides loving the drama, Yours has elevated the plot, and both the Kdrama fans and Kpop fans can agree on it.

While Yours was an OST, it has made its name globally too. Firstly, it’s sung by the vocal god Jin. Secondly, the song will leave you filled with feelings, pain, and love, as it concludes. Thus, it made its way into the ‘Spotify Global Charts.’ It is the first Korean OST to enter the charts, earning another accomplishment to the singer’s name. Also, the song recorded almost 1.7 million filtered streams on its debut.

Nevertheless, ‘Yours’ now owns a spot on best songs from BTS Jin. And, many will join the ‘Best Jin songs’ soon.

Jin’s Contribution To Other BTS Songs

ARMY is aware of Jin’s contribution to BTS music; from singing to writing to acting as the main character in the Music videos. From time to time, Jin has showcased his talents. BTS’ best ballad creations like Crystal Snow, 21st Century Girls, and Don’t leave Me to reflect his vocals in the best possible way. Moreover, the variety his voice can offer is insane. Songs like Dionysus, Jamais Vu, Stay Gold, and Permission To Dance might have different genres. But, you’ll find Jin acing his perfect voice and setting it right with the tone, EVERYTIME.

If you ever want to get struck with millions of feelings and emotions at once, check out the ‘Best BTS Jin songs’ we just mentioned above.

Also Read: Top Music Genres Covered by BTS You Should Listen To!