Ha Ru gets a job offer from Goodle in Silicon Valley. When he hears that So Ri will work at her father's office he decides to shut down 'Twist'. 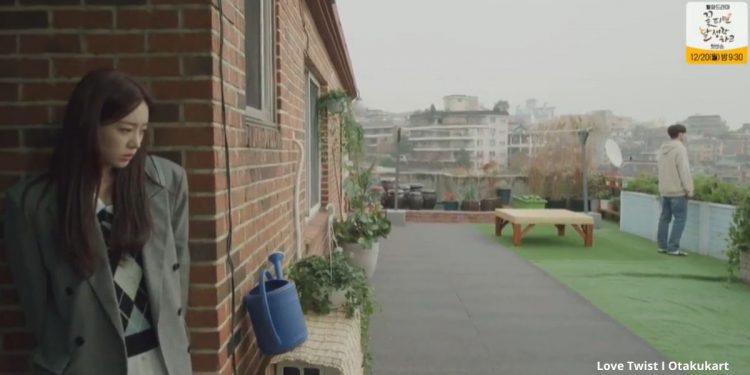 So Ri and Ha Ru are forced to part ways because of So Ri’s father. Even though ‘Twist’ is a promising business So Ri’s father believes that she should work in his company. When So Ri started her business, she wanted to take over her father’s company so that she could prove her worth. However, along the way, she realizes her love for the company. Also, Ha Ru is an intelligent guy who lands a job in Silicon Valley, but in ‘Love Twist’ episode 8, he is confused if he should accept the offer.

Other than young love, old love is also blooming in the story. Hee Ok is no more satisfied with being a side lover. She suffered horribly in her previous relationship and decides to come back from the U.S with Gwang Nam. When Mi Ja finds out about their affair, she becomes furious. As the story progress, we might see So Ri and Ha Ru grow apart and Hee Ok and Gwang Nam forming an even stronger relationship.

Till now, we have seen that Hee ok and Gwang Nam are having a good time together in South Korea. When they come out of a restaurant together, Mi Ja confronts them. They successfully spin the story by saying that Ok Hee asked Gwang Nam to look out for her. Later, everyone arrives at Hee Ok’s house for the welcome party. Even there, Mi Ja witnesses a very shocking scene. Hee Ok is rubbing Gwang Nam’s leg with her foot. Their fun under the table might get them into trouble.

On the other hand, Ha Ru is sad to hear that So Ri’s father is making her shut down the start-up and go abroad to study. However, So Ri is dedicated to keeping her business afloat. For this, she borrows money from her mother and pays her supplier. Moreover, against getting the money So Ri promises her mother that she will meet with Choi Moo II. On their first date, So Ri gives the wrong idea by saying she has a boyfriend. She also confessed that her mother put a condition to go on this blind date against giving her money.

After hearing, So Ri’s father talk about their business, Ha Ru is very upset. Also, hearing that she went on a blind date clouds his judgment. When he meets So Ri after her blind date, he suggests that they should close down ‘Twist’. However, So Ri will not give up so easily.

Later, So Ri finds out that Ha Ru received a job offer from Google in Silicon Valley. Back at home, Mi Ja is in shock because of Hee Ok and Gwang Nam’s romance. She grabs the opportunity and asks Gwang Nam what is his relationship with Hee Ok? This turns the conversation into a fight.

So Ri’s grandfather gives her an ultimatum to bring a person she wants to marry before the year ends. This will be hard for her but if she doesn’t bring someone her grandfather will force her to go on blind dates again. Now as Mi Ja knows Hee Ok’s secret, she texts Her to meet. After having a fight with Mi Ja, Hee Ok visits Ha Ru at his office and tries to convince him to take the job offer. Will’ Twist’ really close down? Watch ‘Love Twist’ episode 8 to find out.

The ‘Love Twist’ Episode 8 release date is 22nd December 2021. In the upcoming story, we will see So Ri and Ha Ru finally parting ways. Even though they have worked day and night on their company So Ri’s father’s affirmation to make her work in his company has ended their journey together.

Where To Watch ‘Love Twist’ Episode 8?

‘Love Twist’ is a television series broadcast by the KBS2 network. As it is a weekly drama, people living in South Korea can watch the episodes From Monday to Friday. As for international fans, they can subscribe to the Rakuten Viki site and watch ‘Love Twist’ episode 8.